This endowed lecture series honors the Rev. Dr. James Crumley, former President of the Lutheran Church in America. It brings to campus leaders who are outstanding in their fields and glad to articulate their sense of Christian vocation. The lecturers and the titles of their presentations: 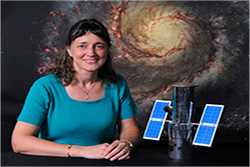 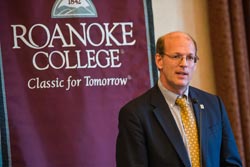 "Working Together to Build Homes, Community and Hope"
September 3, 2013 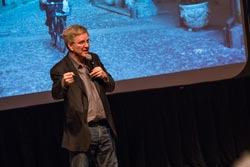 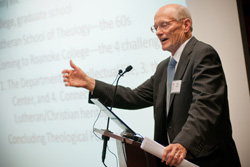 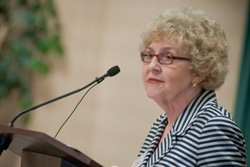 Jean Bethke Elshtain
Laura Spelman Rockefeller Professor of Social and Political Ethics at the University of Chicago Divinity School, member of the President's Council on Bio-Ethics
"The Blessings and Burdens of a Christian Political Philosopher"
March 31, 2011
Video 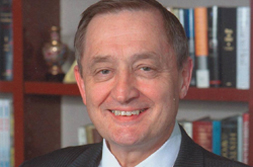 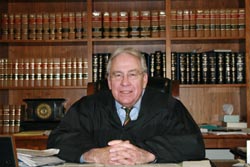 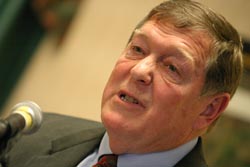 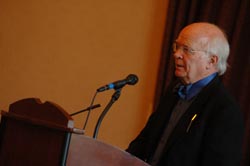 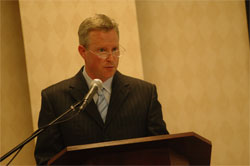 Christopher Cock
Director of choral ensembles at Valparaiso, head of the Bach Institute, and Duesenberg Professor of Lutheran Music 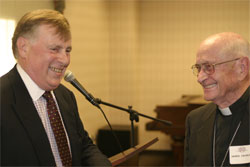 "Called to the Beat: Christian Convictions and the Life of Journalism"
March 30, 2005Mr Siemon-Netto is conversing with Bishop James Crumley, '48, for whom the lecture series is named.

2002 - Rev. Dr. Julius Filo, President of the Lutheran Church of the Augsburg Confession of Slovakia "Keeping the Faith Before and After Communism."

2001 - John Stumme, Director of Studies for the Division for Church in Society of the Evangelical Lutheran Church in America "Two Cities, One City, or No City?" Stumme Lecture

2000 - Paul Hinlicky, Jordan-Trexler Professor of Religion at Roanoke College "The Spirit of Christ Amid the Spirits of the Postmodern World."

1999 - L. Milton Woods, former treasurer of the Lutheran Church in America "It is Enough."