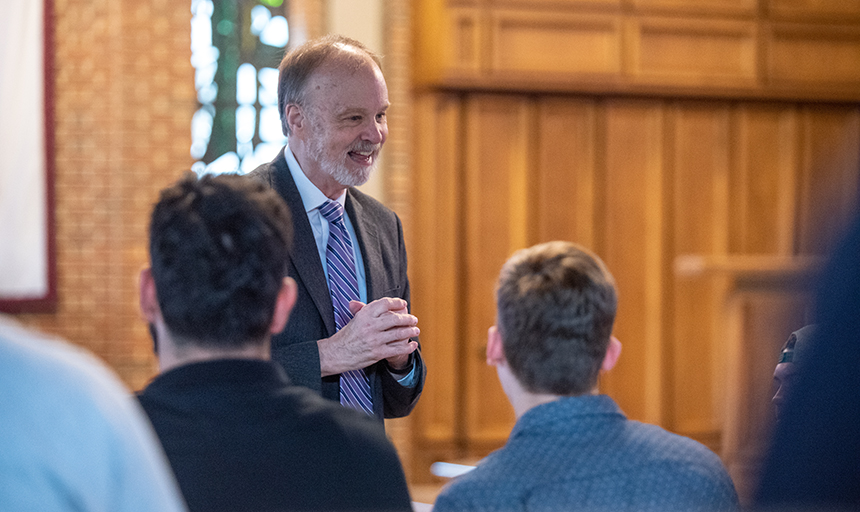 The David L. Guy Lecture Series is presented by the Center for Economic Freedom. The Center also sponsors an annual undergraduate economics reading group. This year they read “The Myth of the Robber Barons,” authored by Folsom, an economic historian. The reading group then got to meet with Folsom when he was on campus Tuesday.

“It was a special experience for them,” Kassens said. “They had excellent questions including how Folsom picked the characters that he included in his book. Students gained an appreciation for the book writing process.”

After that, Folsom taught a class in which he compared the economic growth of the 1920s to the sluggish economy of the 1930s in the United States. About 30 students attended the class, which took place in Antrim Chapel. Students were able to ask questions related to the book and learn more about early commerce in our nation.

"Folsom told a tale of economic growth and remarkable innovation of the 1920s and compared the period to the stagnation experienced in the 1930s,” Kassens said. “The numerous examples helped cement and clarify his point that lower taxes incentivize innovation and creativity."

“It was a special experience for them. They had excellent questions including how Folsom picked the characters that he included in his book. Students gained an appreciation for the book writing process.”

That evening, Folsom presented his lecture, “How Entrepreneurs, Not Government, Built America.” First, Folsom spoke at a small dinner, and later to a packed Wortmann Ballroom in the Colket Center. Folsom entertained the crowd with early examples of free market success and shared historic facts in an engaging way.

One student in the audience asked a question comparing the early shipping market to modern day businesses like FedEx, UPS and the United States Postal Service. Another wondered if there is room for smarter government subsidies in the future.

The event was sponsored by David L. Guy ‘75 and Young America’s Foundation.