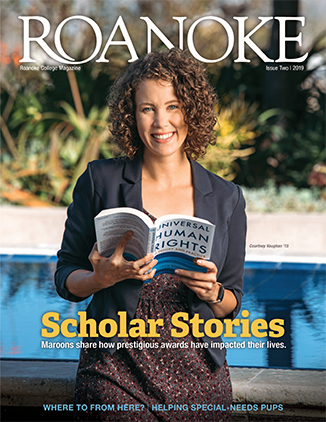 The Truman award opened the door wider to the Capitol Hill career Urecki set her sights on years ago. Today, she is a professional staff member on the U.S. Senate Committee on Energy & Natural Resources, working for ranking committee member Sen. Joe Manchin III, the Democrats’ top member on the Senate committee devoted to energy issues.

“I never would have applied for the Truman if not for Dr. [Jennifer] Rosti,” Urecki says of the College’s director of major scholarships and fellowships. “That’s not the type of thing I would have done. But Roanoke believed in me more than I believed in myself.”

Urecki, Courtney Vaughan ’15 (on cover, at left), Kathleen Ouyang ’13, Maj. James Guthrie ’98 and Dr. Jake Bennett ’08 — all recipients of prestigious scholarships and fellowships during their years at the Roanoke — share how these awards transformed their lives in the new issue Roanoke College magazine, in mailboxes soon.