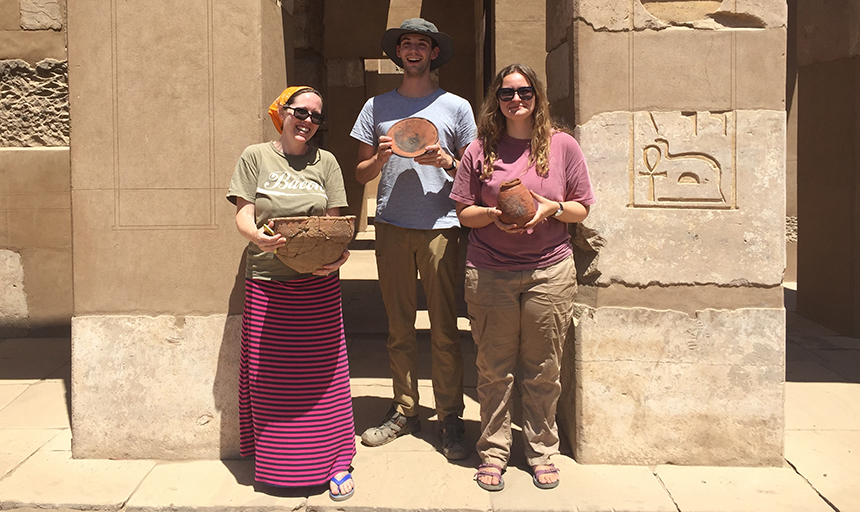 We (Serena Soterakopoulos '18 and Jacob Friedrich '19) are Art History majors at Roanoke College. We also work as ceramic research assistants under Dr. Leslie Anne Warden (Art History), where we analyze ceramic material that has been excavated from various sites throughout Egypt. This past May and June, due to the generosity of an anonymous RC donor we had the remarkable opportunity to travel to Elephantine Island, Egypt to work on the 'Realities of Life' archaeological project run by the German Archaeological Institute, Cairo (DAI), under the direction of Dr. Johanna Sigl. The DAI has been active at this site for forty-six years, but this current project has only been in the works for the past three. 'Realities of Life' utilizes the archaeological record from a settlement located on the southeastern portion of the Island to piece together the daily life of the Ancient Egyptians who lived there. This is important because the focus of this project is on ordinary, everyday people who are often overlooked in favor of grand monuments and elite artifacts. Everyday objects, such as pottery, can tell us about daily activities and cultural influences, thus better explaining the life of an everyday ancient Egyptian from Elephantine. For the five weeks that we spent on the Island we worked with Dr. Warden, the head ceramicist on the project, to process ceramic material that had been excavated during a previous season.

To get a better sense of the geography of Egypt and where the Island is located, here is a map of where we are. The island of Elephantine lies in the middle of the Nile River and is located to the West of present day Aswan, one of the largest cities in southern Egypt. The important takeaway is that Elephantine was of interest to the pharaohs because of its strategic location. It was on the traditional fringe of Egypt, just above the country of Nubia, making it ideal for trade and political control. The Island was sacred to a number of creative deities: Khnum, Anuket, and Satet, and the granite for Pharaonic and non-royal building projects such as granite for statuary, obelisks, and temples, came from Elephantine and Aswan.

The archaeological work that we helped to accomplish at the site focused solely around the ceramic material. As this is a settlement site, we were not dealing with large tombs but instead with the deposits of daily life. As pottery was used every day in a settlement context, it makes sense that it would have a lot to reveal to us for this project. When the site was excavated during a prior season, thousands of sherds were found, giving us a lot of material to work through in a short amount of time. One of our most difficult tasks was drawing pottery sherds, meaning we would use a variety of tools to measure and trace a piece of broken pottery. The result of this would be an interior and exterior profile of the sherd, giving us an idea of what the complete vessel would have looked like, which is extremely helpful in understanding the types of pottery used at the site. We also learned how to identify sherds based on their fabric type, meaning what the material of a sherd is after it has been fired. This is an extremely important factor when determining how the vessel was used and its provenience. Packing sherds away also became a big part of both of our jobs while at the site, since something had to be done with all the sherds once they were drawn or marked as a sample for further testing. Along with all of this, we also entered information into a database that keeps a record of every single sherd that was processed in some way. Thankfully, most of the archaeologists working at the site were helping to work through the pottery too, or else we would not have been able to complete as much as we did.

Through our work at the site and our experiences of seeing modern Egypt, we have come to see that there is an unavoidable link between ancient and modern times that can be seen through pottery and the Island itself. Pottery is an essential part of the 'Realities of Life' project because we have a plethora of ceramic material that the ancients were constantly producing and using, meaning it can tell us how ancient Egyptian society functioned. There are a wide range of vessels and forms that the ancients used, such as cooking pots, jars, bowls, platters, and bread moulds, just as there are many types that we use today. By analyzing these styles through a compiled corpus, we can differentiate across different periods like the Middle Kingdom or New Kingdom, locations such as Upper Egypt or the Nile Delta, and through uses like cooking or storage.

Elephantine's location on Egypt's southern border means that it had contact with Nubia, the country directly below Egypt. One of the main classes of ceramics found on Elephantine that can be differentiated from Egyptian ware is a style that imitated the decorated, black, polished pottery of Nubian ceramics. The distinct style of this imitation made it easy to pick out from the reds and browns of Egyptian pottery on the Island. This could mean that Nubians came to Elephantine with their own methods of producing ceramics, and that they did not drop these practices simply because they were in another country. Another option, which is not necessarily mutually exclusive, is that the Egyptians were adopting the pottery style of the Nubians because they liked it. In both aspects, this ceramic record shows that the Egyptian culture on Elephantine was not monolithic and that there was a cultural exchange between the populations.

Through our experience of living on the Island, we have come to see that Elephantine and Aswan, while unmistakably Egyptian, each have a distinct culture of their own. Like the adoption of foreign ceramic styles by the Egyptians in ancient times, the modern village on Elephantine includes a mixture of Egyptian and Nubian cultures. During our stay we journeyed through the modern Nubian village on Elephantine, walking between mudbrick buildings joined by narrow street paths that feel like a maze. Though this type of settlement is not markedly Nubian, this village resembles the ancient settlement on the island that is being excavated by the DAI in terms of the structural layout of the town and the narrow, winding village paths. In a way, walking through the village gives the feel of what the settlement might have felt like in ancient times, but as you walk along there are oddities that stick out that are not ancient. We saw children playing in the dirt streets and a donkey running by, but also heard the sounds of a television coming though the walls and saw giant air conditioners that stick out of windows. It is obvious that past traditions have not disappeared and that modern elements exist alongside them. The people of this town will say that they are Nubian, but where is the cultural line that separates Nubian from Egyptian? If you didn't know what you were looking for, as we did not from our outside perspective, the externally visible air conditioners, Egyptian TV, and the multitude of cats and dogs, do not mark this village as a distinctive group. In our archaeological work, the ceramics we have worked with show that the Nubian styles were incorporated into the Egyptian corpus. The meshing of the ancient culture that we saw in examples of pottery from the settlement parallel the culture that we see in the village today, to the point where distinctive cultural lines become blurry and may exist only in our personal perspectives.

Through this project, we dove into the rich archaeological history of Elephantine Island while exploring the current vibrancy of the Egyptian culture. None of this would have been possible without the kindness of our anonymous donor, or without those involved with the German Archaeological Institute, Cairo (DAI) 'Realities of Life' project. It was an incredible experience to dive deep into the traces of the past, especially when we realized that the past and present of Egypt are tangled together in such remarkable ways. As time presses on from the immemorial past to the future, it is humbling to us that we were able to be a part of and study a small piece of Egypt's history for the short time that we had. We hope that others may have the opportunity to explore Egypt and her eternal wonders, as we have been so fortunate to do.   ­­­­