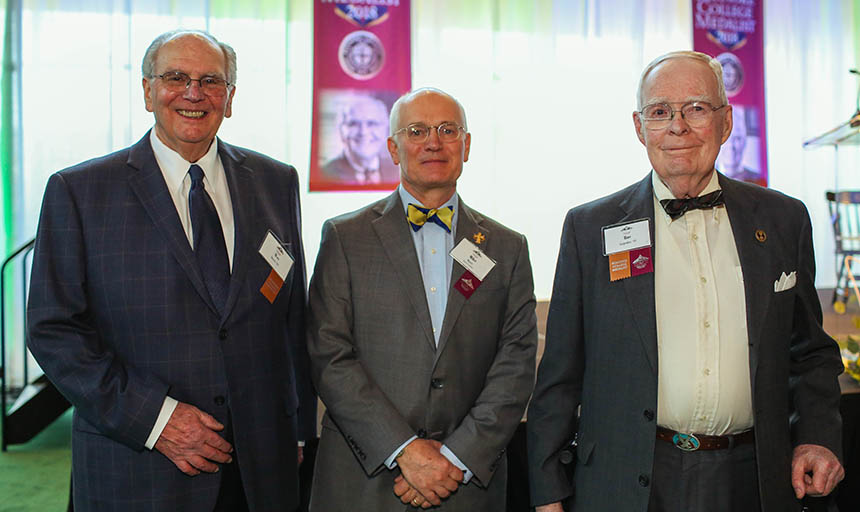 Roanoke College is honored to welcome Dr. D. Rae Carpenter, Jr. '49 and Wesley Graves VI '63 back to campus to accept the Roanoke College Medal during the 2018 Alumni Weekend.

Roanoke College is honored to welcome Dr. D. Rae Carpenter, Jr. '49 and Wesley Graves VI '63 back to campus to accept the Roanoke College Medal during the 2018 Alumni Weekend.

Both Carpenter and Graves are assets to the Roanoke College community and their respective profession communities, leading distinguished careers in their fields.

Carpenter was born and raised on Roanoke College campus to Gladys Carpenter and Delma Rae Carpenter, Sr., a member of the faculty and future College registrar. Carpenter continued his higher education at the College where he studied physics. He was a lab assistant to Dr. Charles Raynor where he learned lab techniques and teaching strategies that helped lay the groundwork for his career in higher education.

Upon graduating, Carpenter went on to Cornell University where he earned his M.S. in experimental physics and applied mathematics. He joined the faculty of the Virginia Military Institute teaching physics for 40 years. He later received his Ph.D. in Experimental Physics from the University of Virginia and held visiting professorships at West Point and Auburn University. Carpenter and fellow Roanoke alumnus and VMI faculty member Richard "Dick" Minnix '54 developed short courses on physics that were produced as lecture demos.

Carpenter is a member of the Roanoke Regional Committee for the Roanoke Rising Campaign and established an endowed scholarship.

Graves pursued a major in Chemistry at Roanoke, but it was a class in finance, however, that led him to enter into a career in financial planning. After graduating from the College, Graves returned to his hometown to balance working on the family farm and working as an analyst and later, financial advisor, for the Branch Cabell & Company. He then joined Wheat First Securities, now known as Wells Fargo Advisors. He later earned Farmer of the Year from the Harrisonburg-Rockingham Chamber of Commerce.

Graves currently works with his son Asa at Graves Light Wealth Management Group of Wells Fargo Advisors and seeks any opportunity to spend time with his four grandchildren.