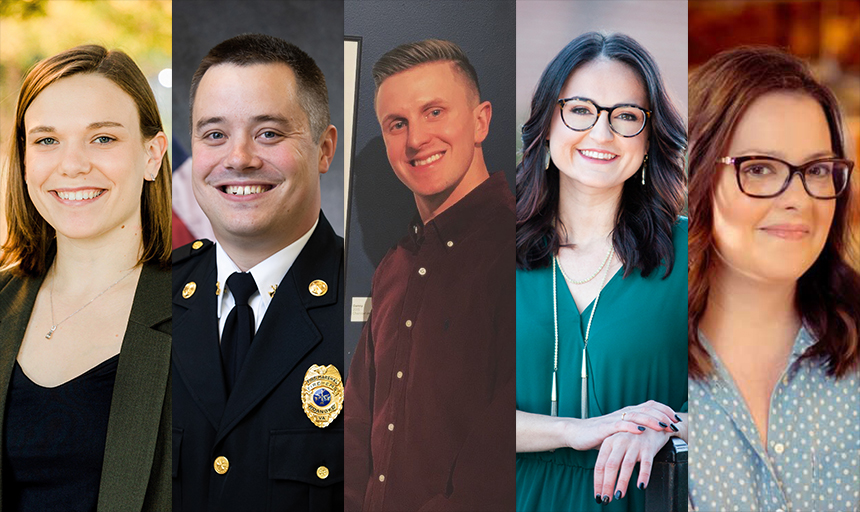 In Roanoke, the new year always signals the release of the Roanoker Magazine’s 40 Under 40 honorees. The annual listing honors young professionals who are making a difference in the greater Roanoke area.

More than 130 people were nominated, according to the Roanoker article, and five Roanoke College alumni made the final list.

What nominators said: “It is unusual to encounter a professional so young in her career who is also so poised, cool under pressure and capable as Curtis. In her time at Carilion, she has built a reputation internally as a trusted advisor and communications strategist at the very highest levels of the organization. Likewise, her peers and their bosses count on her judgment and expertise in the stickiest of situations.”

What Curtis said: “As someone who typically works behind the scenes, it was a surprise and honor to be recognized. The last couple of years have been difficult but filled with professional growth. It’s been a privilege to work alongside skilled communicators, clinical providers, and community leaders during that time, and I’m proud to have that work spotlighted.”

“Roanoke College allowed me to bring my vision of myself into focus. I declared my major early on, but it took four years of working with faculty and advisors, three internships, one capstone, and one year as president of Roanoke’s chapter of Lambda Pi Eta (the national communication honor society) for me to pinpoint how I would translate my major into a fulfilling career. In addition to giving me a strong academic foundation, Roanoke introduced me to teammates and alumni who are now lifelong friends and mentors (plus one teammate who is now my husband). I left Roanoke with a defined direction and have been able to build on that passion ever since.”

Other community involvement: Volunteer reader at his children’s schools, volunteer at events such as Read Across America and National Night Out.

What nominators said: “Guynn has so many personal achievements it's hard to name them all. He is a high achiever and works hard to obtain his goals. Guynn is a team player. He always gives 110% and his vision for the Fire Marshal's Office in the City of Roanoke will make the residents and visitors to the city safe. He looks through an equitable lens to ensure that businesses are being treated fairly when it comes to inspections. He also serves as a mentor to younger firefighters.”

What Guynn said: “I love the feeling of community that we have here in the Roanoke Valley, and I love being able to contribute in my own way to make it a great place to live, work and play. I grew up here, I started my career here, and the city and this community brought me and my family home.”

What nominators said: “Murrill’s work provides both beauty and culture to area businesses and their patrons. He truly uses his gifts in the arts to better the lives of others as an educator, artist, husband, son and father of two preschool sons. He represents the best of the Roanoke Valley.”

What Murrill said: “I feel very blessed to have been honored as one of the 40 young professionals from our area this year. Last year I read the list of nominees and made it one of my goals to be on this year's list. By reaching that goal and also being selected for the cover of that issue, I am only more motivated to go further in my artistic career in 2022.”

“Roanoke College allowed me to bring my vision of myself into focus. ...I left Roanoke with a defined direction and have been able to build on that passion ever since.”

Profession: Clerk to the Board of Supervisors and Manager of Public Affairs, Franklin County

What nominators said: “Sefcik’s personality is unlike anyone else I have ever met. She is hardworking, intelligent, passionate, dedicated, and innovative. She puts everything she has into her community and still comes to work with a smile on her face. As her intern this past summer she was an amazing mentor. I had the most amazing experience and most of that credit was due to her. She helped make sure I was comfortable and integrated me into the community. She is making Franklin County a better place!”

What Sefcik said: “Being a member of the 40 under 40 list energizes me for the future of Roanoke and what we can accomplish together as a community. It's a wonderful reminder and motivator to continue to make our region a better place each and every day.”

“I credit Roanoke College for helping me find my purpose and what drives me professionally. The experiential learning opportunities I had while I was a student provided me with hands-on experience that paired well with my academic work. …During my junior and senior years at Roanoke College, I was able to intern in the Government Offices of Franklin County, where I am currently employed. Roanoke College provided me opportunities to expand my leadership and interpersonal skills while completing a degree in Business Administration. I am thrilled to still be within the Roanoke region and working in close proximity to my alma mater.”

Other community involvement: Member of Leadership Roanoke Valley, volunteer with Roanoke Valley SPCA, Children’s Trust, Feeding Southwest Virginia, The United Way and others, part of the W.I.S.H. Circle, Make-A-Wish Greater Virginia, 2020, and surpassed her campaign goal by 143 percent ($14,314), the most of any participant.

What nominators said: “Perhaps her greatest career achievement was stepping into a leadership void at Access in early 2020 right as the pandemic struck. She rose to the occasion, supported the CEO (me) and provided leadership and level-headed guidance that helped the firm navigate those tricky times and actually grow. As a result, she was recently made a partner in the firm. She did all this while raising two preschool kids and helping manage a home, which speaks volumes for her in infinite ways.”

What Spencer said: “It’s very humbling. There are a number of my professional peers, many who are also RC alum, who have appeared on this list over the years, and I’m honored to be considered of the same caliber. …At age 22 or 23, I thought of myself as a very small fish in a big pond, but now I know that the size of the fish or the pond doesn’t really matter – there is always space for growth and making a difference.”

“There is no way I would be where I am without my Roanoke College experience. First of all, Roanoke College introduced me to the community that I would end up calling my forever home. But it also gave me confidence in myself to approach challenges and opportunities in life, and in work, through an analytical lens; to think critically about the dynamics at play and my own role in the solution.”