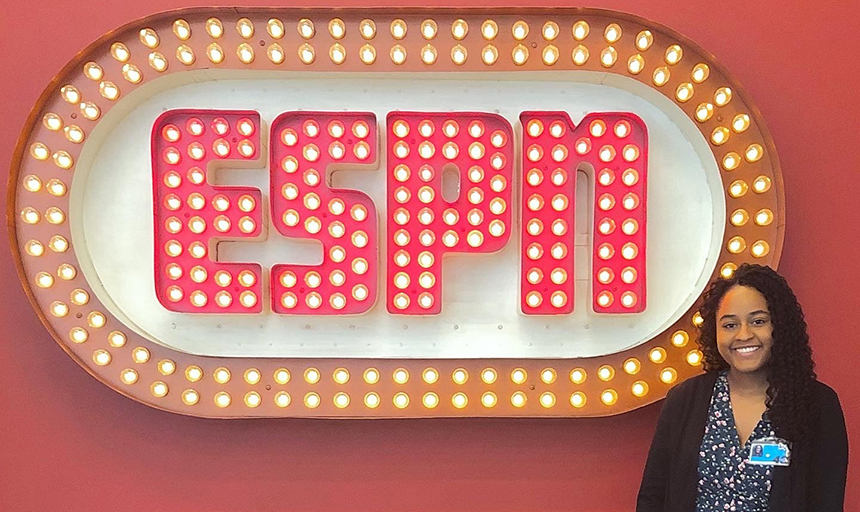 Jamella Foster ’17 has had a lifelong love of sports. Rec league basketball and soccer in elementary and middle school. Cross country in middle school. Basketball, track and field, softball, and rec league soccer in high school. Four years as a member of the Roanoke College women’s basketball team – her senior year as team captain.

In August, Foster started working as a production assistant for ESPN’s “NFL Live,” her first job assignment through ESPN Next, a leadership development program based in content production. The 18-month program offers young professionals an opportunity to network with leaders, explore different areas of ESPN, and work with a diverse group of people.

As a production assistant based at ESPN headquarters in Bristol, Connecticut, “I’ll create content that airs on [NFL Live], operate the teleprompter, and interact with the analysts and team members to cover the top NFL news,” said Foster, whose work experience includes a stint as a communications assistant for the Washington Football Team. “After successful completion, I will move on to a content associate, which is the next step up from a production assistant.”

The opportunity to create engaging and compelling content for viewers, and to work with the “best and brightest in the broadcast industry,” is an exciting prospect, Foster said.

“My experience at Roanoke really gave me the footing I needed to launch my career,” she said, noting the weekly WRKE radio show she hosted, and the senior year internship at the local NBC affiliate she secured through the College’s Office of Career Services.

“And I was fortunate to be taught by some world-class professors in the communications department who shared their passion and knowledge about the broadcast industry,” Foster said. “That really motivated me to use all the opportunities afforded to me at Roanoke to make my dreams a reality.”

Jacob Manthey ’13 is director of health policy for Private Health Plans and Reimbursement at the American Speech-Language and Hearing Association in Rockville, Maryland.

The association supports over 200,000 audiologists and speech language pathologists nationwide. Manthey holds a B.B.A. from Roanoke and an M.S. in healthcare administration and an M.B.A. from Marymount University.

Shena Sanchez ’08, Ph.D. has joined the faculty of the University of Alabama as an assistant professor of qualitative research. Sanchez’s scholarly interests include student identity and voice, education policy and leadership, and the socio-political contexts of schooling.

She is the founder of the Lavender Girls Project, a mentoring and research group for and with Black, Latina, and Asian girls from Title I high schools who have experienced academic exclusion and discipline.

Sanchez holds a B.A. in English literature from Roanoke, an M.Ed. in international education policy and management from Peabody College at Vanderbilt University, and a Ph.D. in education from UCLA’s School of Education.

Nangle holds a B.B.A. from Roanoke and an M.B.A. from California State University, Fresno.

Amanda Nitto ’09 has been named one of Charlotte, North Carolina’s 50 Most Influential Women for 2021. The list, compiled by The Mecklenburg Times, honors women for their influence and leadership in the Charlotte-Mecklenburg community.

Nitto, a partner at the Robinson Bradshaw law firm, is an active member of the Charlotte community, serving on the Charlotte Regional Business Alliance’s Board of Trustees and on the Board of Directors of Smart Start of Mecklenburg County.

Nitto holds a B.A. in political science from Roanoke and earned a J.D. from the University of South Carolina-Columbia.