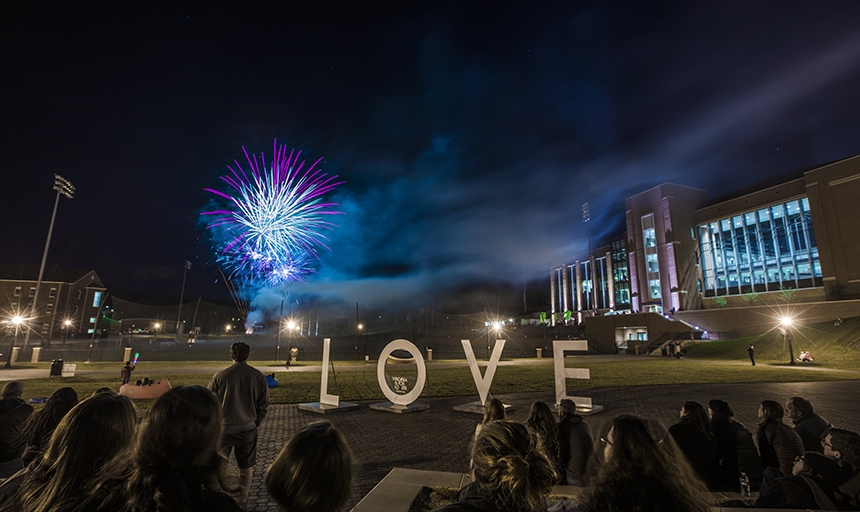 Roanoke College marked its 175th anniversary as hundreds of graduates and their families returned for Alumni Weekend 2017. The weekend began with the sad news of the passing of Roanoke’s eighth president, Dr. Norman Fintel. However, he was honored as planned, along with his wife, Jo, with the Roanoke College Medal. Roanoke’s ninth president, Dr. David Gring, and his wife, Susan, also were honored with the Roanoke College Medal. Both were presented at the Society of 1842 luncheon in the Cregger Center. These stories have more on the legacies of the Fintels and the Grings, complete with the tribute videos.

Alumni bands Rutledge and the Downing Brothers rocked the campus all weekend.

Several Roanoke Maroons were inducted into the Athletic Hall of Fame: Don Treacy ’92 and John Mason ’07 for lacrosse; Jill Hoffmeister DeMello ’05 and Regi Francois ’02 for soccer. The Pirro Patio at Kerr Stadium and the Cregger Center was dedicated for #14 John Pirro ’77. The Maroon Club was there to support it all.

A team of three professional photographers and three student photographers took around 5,000 photos and some video too. Here’s just about 200 for you to enjoy!

The new Mac and Marcy Johnson Outdoor Adventures Center was dedicated. The Pi Kappa Phi Centennial Plaza at Chesapeake Hall was dedicated celebrating the 100th anniversary of the chartering of Xi Chapter at Roanoke College on May 5, 1916. The brothers of Kappa Alpha dedicated a rose garden at the President’s House planted to honor the many sweetheart "Roses" of Kappa Alpha. The Monument Club made a toast at the monument.

Student talents and achievements were on display across the campus from watching the Maroons take the field of competition to the Showcase of Research and Creativity in Fintel Library. Theatre Roanoke College presented Becky Shaw. Olin Galleries presented the annual Senior Show of works from our talented art majors.

Many alumni were surprised at how the campus has grown and improved. The Kerr Stadium, CAR, New Hall, Cregger Center area especially wowed everyone. Even the Virginia is for Lovers LOVE sign made an appearance through the week.

The skies above the campus were decorated with an amazing fireworks display, framed by Kerr Stadium, Alumni Field, the Cregger Center and CAR/New Halls. The view was perfect from the Colket Center patio. Roanoke College is 175 years old and it never looked better!