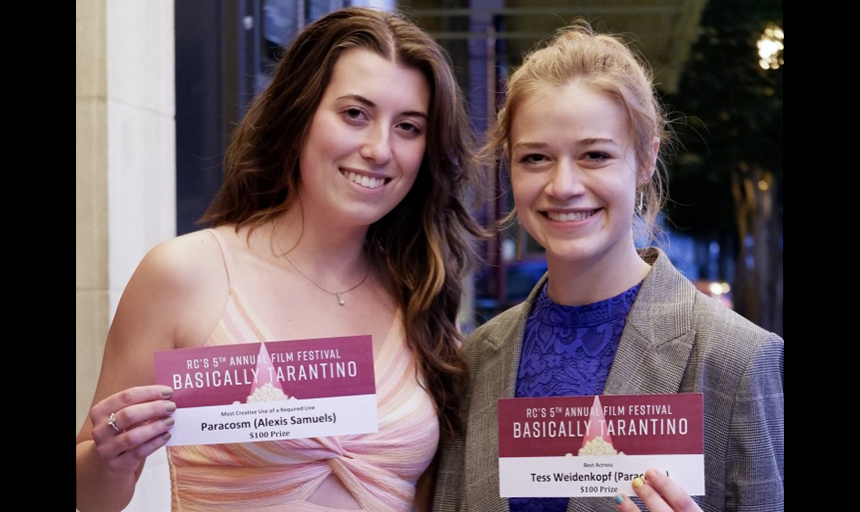 The fifth annual Basically Tarantino Film Festival and awards presentation occurred Wednesday, May 12, 2021, at the historic Grandin Theatre in Grandin Village. Six student-written and produced films were featured on Grandin’s big screen and were eligible for nine awards including best drama picture, best comedic picture, audience choice, best director, best screenplay, most creative use of a required prop, most creative use of a required line, best actor, and best actress.

The six films nominated were "Graduation Schmaduation," "In Her Echoes," "Job Interview," "Paracosm," "Stace Spation," and "Until It’s Not."

While students had freedom in creating short films on any topic of their choosing, films did need to meet a few basic requirements set by the festival committee: maintain R-rated or below content, exceed no longer than 12 minutes in run time, and include the committee’s choice for required lines and props.

This year’s predetermined lines and props gave a nod to the COVID-19 pandemic: filmmakers were required to include the word “mask” in their script, and utilize an avocado and a face shield as props.

Monetary prizes were also presented to category winners. Winners in best drama picture, best comedic picture, and audience choice won $200 each while winners in the remaining categories won $100 each.

Because last year’s film festival was canceled due to COVID-19 health guidance, this year’s celebration was all the more special with an in-person, socially-distanced premiere at The Grandin Theatre, which allowed for 50 invited guests. Guests included faculty, student filmmakers and actors, family, and friends.

Joe Boucher ‘87, Roanoke College’s director of student activities and Colket Center and mentor to the film festival, said that while there was disappointment in the festival cancellation last year, this year’s filmmakers hit the ground running, eager to explore their talents and creativity.

“We had a core group of filmmakers who were determined to continue within COVID protocols on campus,” said Boucher.

Boucher said he was especially “proud of the amount of collaboration between the films,” as many students not only worked on their own projects but also lent helping hands to peers’ projects as to not “widen the COVID protocol circle."

“A lot of our student body at Roanoke is diverse, and this is such a great way to highlight everything that we have to offer. We can express ourselves outside of the classroom, which is really important.”

Boucher said that while the initial intention of the film festival was to promote the Screen Studies concentration and allow students a space for filmmaking exploration, he envisions the concentration growing. He hopes it will include more in-depth coursework and offerings because many past film festival participants are pursuing careers in filmmaking, screenwriting and music production.

“The film festival has grown beyond our initial plans due to really great student engagement,” Boucher said. “We are setting our sights on a Media Arts major in the years to come.”

Through the mentorship of Boucher and several professors in the English and Communications department, the film festival has become a tradition many look forward to at the end of the academic year to showcase their learning.

Students Zachary Dalton ‘21 and Kaillee Philleo ‘21, both returning participants of the film festival, said they appreciated the creative freedom the event offers.

“The festival is such a great way to showcase our efforts and what we have been applying our time to,” said Dalton, who was Master of Ceremonies at this year’s Grandin premiere.

“A lot of our student body at Roanoke is diverse, and this is such a great way to highlight everything that we have to offer,” Philleo said. “We can express ourselves outside of the classroom, which is really important.”

Most Creative Use of Required Line: "Paracosm" by Alexis Samuels

Most Creative Use of Required Prop: "Graduation Schmaduation" by Zachary Dalton

Best Director: Joyelle Ronan in "In Her Echoes"

Audience Choice (three-way tie): "Graduation Schmaduation" by Zachary Dalton, "In Her Echoes" by Joyelle Ronan, and "Until It’s Not" by Kaillee Philleo

Best Drama: "In Her Echoes" by Joyelle Ronan