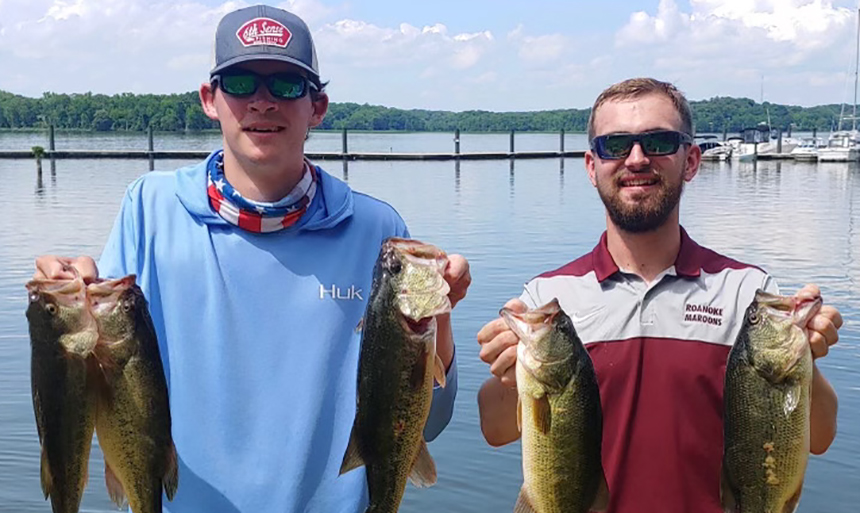 Branen McKeon ‘24, left, and Will Hamilton '22 pose with their catch after the Abu Garcia College Fishing event on the Potomac River on June 4.

For the first time ever, Roanoke College bass fishers are going to the national championship.

“It’s super exciting to be able to do it for Roanoke College,” Hamilton said.

The team has grown in recent years. When Hamilton arrived at Roanoke, he said, there were only three or four people who wanted to fish in tournaments. Now there are seven people interested in competing.

The fishing team has its own boat, thanks to a donation, and can use that boat in competitions. Hamilton said not all schools that have a boat allow their fishers to use the boat for competitions, but at Roanoke, they are permitted to use the boat.

“If we keep doing like we are and stay on the track that we are and keep growing, I see it staying at Roanoke College. I see it hanging around for a long time.”

Hamilton and team advisor Bob Shupe both said the team has become increasingly competitive and dedicated in recent years, and the progress has been impressive. Hamilton said if the team continues to compete this well against tough national competition, the team could be a feather in Roanoke College’s cap for years to come.

“If we keep doing like we are and stay on the track that we are and keep growing, I see it staying at Roanoke College,” Hamilton said. “I see it hanging around for a long time.”

The Abu Garcia College Fishing circuit is under the umbrella of Major League Fishing, and MLF promotes and airs the collegiate events. When the championship takes place in March, it will likely be livestreamed at majorleaguefishing.com.