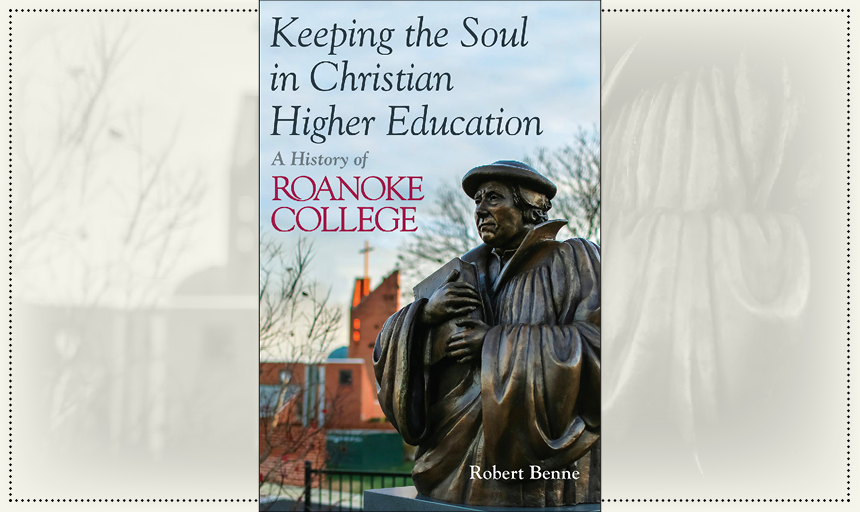 Keeping the Soul in Christian Higher Education: A History of Roanoke College

Does Roanoke College have a soul? Dr. Robert D. Benne, Jordan Trexler Professor Emeritus of Religion and Philosophy, examines this provocative question in his new book, "Keeping the Soul in Christian Higher Education: A History of Roanoke College" (William B. Eerdmans Publishing Co.). In the book, Dr. Benne answers the question affirmatively, defining soul as "the discernible spirit of the school," and looks at the College's 175-year history through the lens of its Christian heritage.

Dr. Benne says that one of the most surprising facts he discovered while working on the book was that David Bittle, the College's founder and first president, was "a full-fledged vigorous evangelical," and that the founding of the school was "part of the evangelical strategy to ‘Christianize' America." Thus, the school had a more evangelical than specifically Lutheran focus until around 1900, when "it tended to rely on the generic Protestantism of the day." It wasn't until the presidency of Norman Fintel, Dr. Benne says, that its distinctly Lutheran emphases emerged. "So we are probably more ‘Lutheran' now than ever, even though we have few Lutheran faculty or staff."

Dr. Benne asserts that, over the span of its 175-year existence, Roanoke College has become progressively more secular. The Christian heritage continues in "some small corners of the curriculum and faculty, but one can avoid it if one wishes to." He advocates an "open and unabashed Christian presence in every facet of the life of the college," but wonders if it can be realized in today's climate. "What I would hope for is that leaders in each facet of the college take care that observant Christians-and even a few Lutherans-integrate their religious convictions with their work at college, not in any wooden or self-righteous way, but rather in a sophisticated, subtle, and humble way."
In that way the college will continue to offer a Christian "voice at the table," even though its predominant ethos is secular.

In his book, Dr. Benne also assesses the legacy of Roanoke College's 10 presidents, from David Bittle all the way up to Mike Maxey. He finds that "one quality they all shared was a strong commitment to the flourishing of the College. All had great loyalty and were willing to work hard and sacrifice many things for the good of the College. One conviction they all had was they believed in the College's effort to form the intellectual, moral, and religious virtues of young persons for the sake of the church and the country."
As for what the future has in store for Roanoke College, Dr. Benne says that "on my bad days, I think the religious element of the college will disappear in the next 10-20 years, as it has in many Eastern Lutheran colleges, but on my good days, I think that key leaders can be awakened to the continuing importance of keeping that religious element publicly relevant. I wrote my book to aid in that awakening."