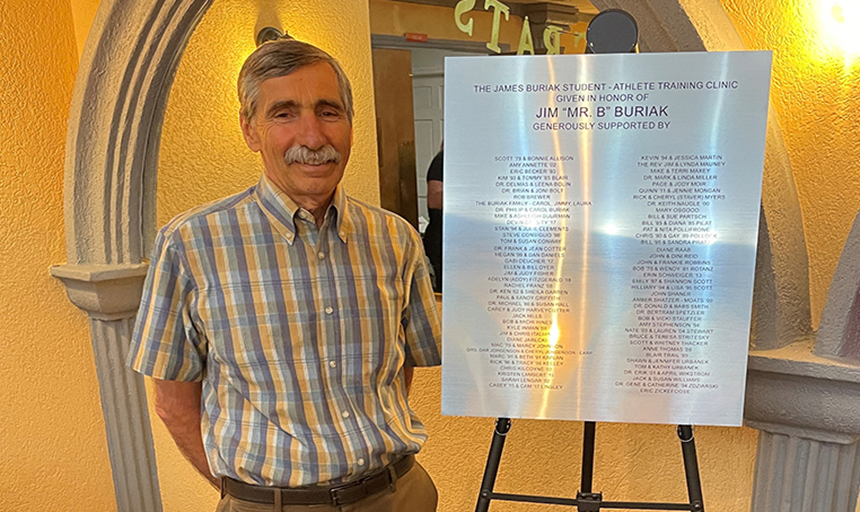 At a surprise reception at Mamma Maria’s restaurant in Salem on May 21, Jim Buriak stands next to a plaque commemorating the naming of Roanoke College’s Athletic Training Clinic in his honor.

Paying tribute to "Mr. B"

A faculty resolution honoring Jim Buriak on May 12 included the following: “We are pretty sure he is the only faculty member, ever, at Roanoke College to propose, start, develop, implement and then dissolve their own academic major.”

The academic major was athletic training, which Buriak started in 1997, 16 years after he arrived at Roanoke as the athletic training program director. The major — though dissolved in 2020 because of a then-new Commission on Accreditation of Athletic Training Education mandate that requires an institution to offer graduate level courses to continue certifying athletic trainers — has been described as “one that became an integral part of the life of the College and Department of Health and Human Performance.”

The clinic’s naming was made possible by the contributions of nearly 70 students, faculty, staff, alumni and friends of the College. The effort was conducted without Buriak’s knowledge. At a surprise reception on May 21, Buriak was presented a mock-up of the plaque that will be mounted inside the training clinic this fall.

“I really enjoyed mentoring and establishing close relationships with students in our athletic training program and am extremely proud of our graduates who are enjoying successful professional careers.”

Buriak, who was inducted into the Roanoke College Athletic Hall of Fame in 1992 and the Virginia Athletic Trainers’ Association Hall of Fame in 2010, said he is “truly honored and humbled” by the recognition. “My success was due to the efforts of many individuals who have supported me throughout my career. I can honestly say it was a team effort,” he said.

“I really enjoyed mentoring and establishing close relationships with students in our athletic training program and am extremely proud of our graduates who are enjoying successful professional careers. It gives me such pride to think that I may have had a small impact on their lives,” he said.

“I have enjoyed working with student athletes, athletic training students, faculty and staff,” he added. “Roanoke College has a special place in my heart that I will cherish forever. It has been a great 40 years.”

The plaque will be finalized in late summer. Those interested in adding their name to the plaque by making a contribution may do so in any of the following ways:

To learn more about The Buriak Athletic Training Clinic or for answers to any questions, please contact Jack Williams at jewilliams@roanoke.edu or at (540) 375-2484.