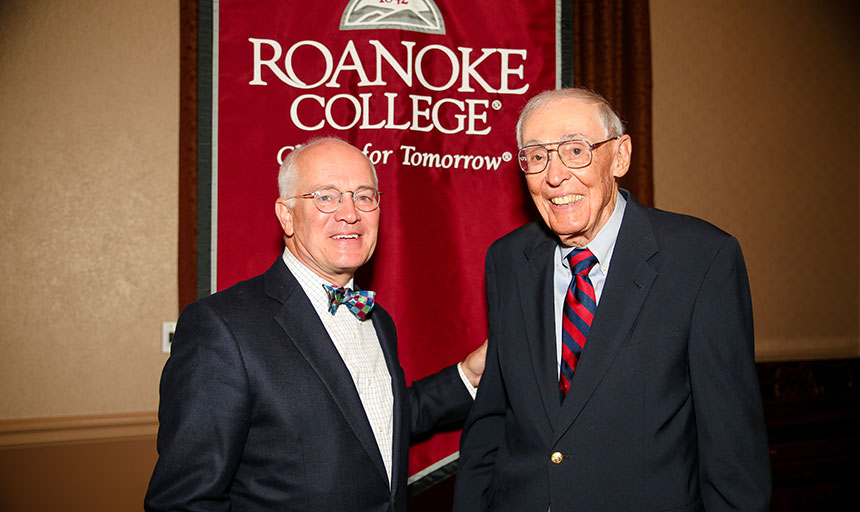 Salem - John Hildebrand is a man of many talents, and today, Roanoke College celebrated his widespread impact in the city of Salem and beyond.

Hildebrand received the Charles Brown Award during a breakfast ceremony at the College. The award is given each year to a Salem resident who has contributed significantly, both professionally and civically, to the city's quality of life. It is named for Dr. Charles Brown, the College's first dean and a former mayor of Salem.

"Salem is made a better place because of individuals," said Roanoke President Mike Maxey, who thanked representatives from the city of Salem for working with the College on many projects.

Hildebrand, a native of Roanoke, is regarded as one of the early pioneers of the consulting engineering firm that is now Roanoke's Hayes, Seay, Mattern & Mattern. John joined Mattern & Mattern soon after he graduated from Virginia Tech with a degree in civil engineering in 1950. He also served in the U.S. Army Air Corps during World War II.

John went on to spend 41 years -his entire professional career- at Mattern & Mattern, which later became Hayes, Seay, Mattern & Mattern. He had many roles there, including serving as executive vice president for the transportation division.

As far as his work in Salem, Hildebrand has served on the city's board of zoning appeals, and he is a member of the Salem Rotary Club. He's also an active member of Salem Presbyterian Church, where he has had various roles through the years.

Additionally, he was construction coordinator for the Salem History Museum's addition, which opened to the public in 2010.

Since his retirement in 1991, Hildebrand has spent considerable time documenting Southwest Virginia history, including the politics of the Civil War. He has written two books and edited another. He also has written numerous historical articles for magazines and other publications.

Hildebrand, who resides in Salem with his wife, Tootie, said he was honored to receive the Charles Brown Award.

"I've been very lucky and...blessed to be a citizen of Salem," he said. "I've always tried to contribute in a positive fashion" to projects by Salem and Roanoke College.