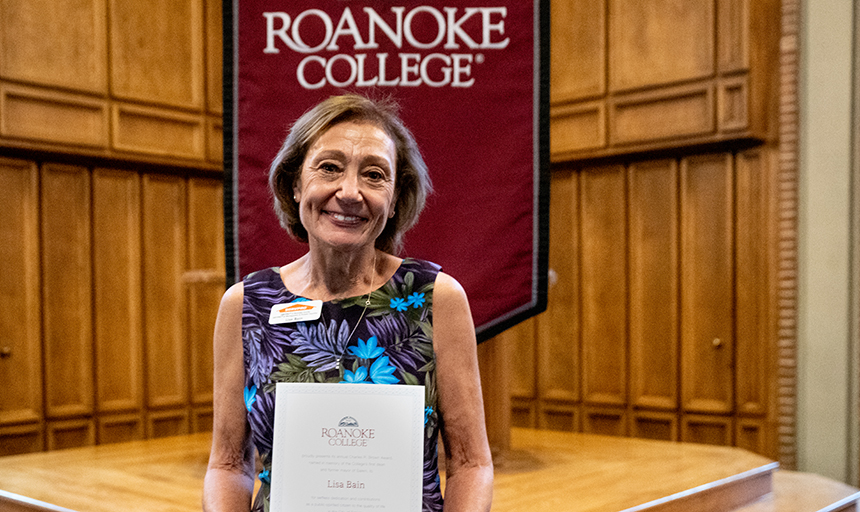 At the annual Salem Appreciation Breakfast today, Lisa Bain was honored with the Charles Brown award. The award recognizes a Salem resident for their contributions to the quality of life in Salem.

Bain has been described as a Salem superstar. She is a recent past president of Salem Kiwanis, where she helped to produce the annual Salem Christmas parade and served as the head of the golf tournament committee.

Bain served as an ambassador and volunteer for the Salem Roanoke County Chamber of Commerce. She was recognized as Ambassador of the Year and was involved in virtually every event the Chamber hosted to raise funds for scholarships.

She has been described as “ever present at community-led volunteer events, always smiling, very approachable.” Remarkably, she has done much of this work for the community while dealing with her own serious health issues.

She helped to organize the Salem Relay for Life.

Bain is president of the Salem Historical Society which runs the Salem Museum. Fran Ferguson at the Salem Museum said Bain has supported and strengthened the museum in a million ways. She has been on the board since 2019 and is president this year. She is a natural team leader and team builder.

Bain and her husband, Mark, have two children who attended Salem public schools. Her son Stephen is a financial planner and her daughter Kerri is a physical therapist.

Bain works at our local Servpro and was nominated by her bosses there: Lisa and Quinn Mongan. In the nomination, they said, “Lisa has such an interest in our community, she was one of the first participants in the Salem Citizens Fire and EMS Academy and the Salem Police Academy. She continues to support these organizations and our first responders.” Currently, she helps organize the Donut Run that supports St. Vincent’s Home and she also helps organize the Virginia Fire Chief Foundation Golf Tournament, which provides scholarships for first responders and their families.