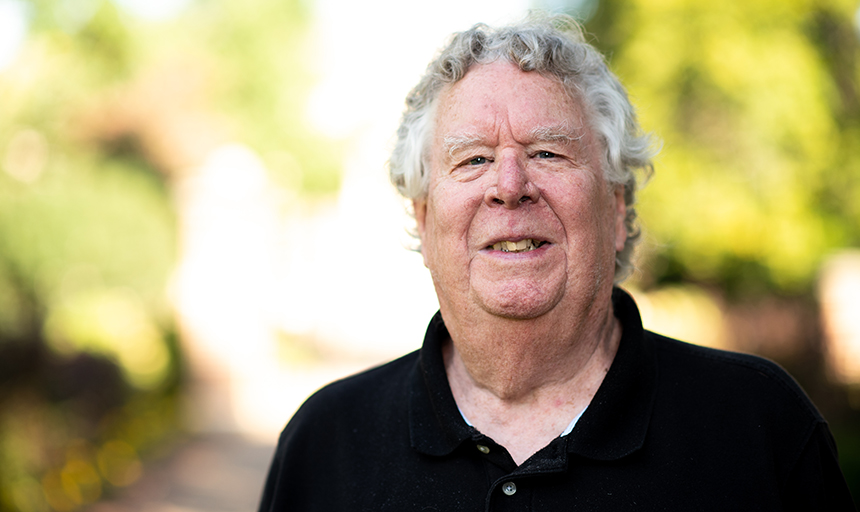 Miller, former professor of history and David F. Bittle College Historian at Roanoke College, is easing his way into full retirement. He is continuing to work on small historical projects, but for the most part is enjoying his free time and time with his wife Linda, who is the College Archivist.

Dr. Jesse Bucher, associate professor of history, is succeeding Miller as College Historian. The two men have become good friends over the years. Bucher said he’s gleaned quite a bit of wisdom from Miller, and, likewise, Miller said Bucher’s passion, cleverness and organizational skills will set him up for success.

Miller joined the Roanoke College faculty in 1979 and his title as College Historian became official in 2001. He was heavily invested in historical research long before that, though. He wrote the definitive history of the College — a book entitled “Dear Old Roanoke” — which was published in 1992.

His popular Board Talks — informal lectures delivered during Board of Trustees meetings — have been compiled into a book of little-known anecdotes about the College’s past. His devotion to international study has included years of service to the Virginia Program at Oxford and five years as the College’s Off-Campus Studies Director. Miller’s awards from the College include Outstanding Advisor in 1990 and four Professor of the Year awards from 1980-1986.

Bucher, who is also the director of the Roanoke College Center for Studying Structures of Race, said one of the keys to Miller’s success in the role of historian has been his love for the institution. Even though his academic specialty is in African history, Bucher said his own adoration for the College will help him succeed.

“It's an expression of how much I care about the institution,” Bucher, who has been at Roanoke College since 2012, said. “I'm trained as an Africanist. It's not like I'm trained as a 19th century Americanist, or a 20th century Americanist. But my interest in the College’s history is actually because I found a home here. I care deeply about the school and telling its story, and that's what drew me into it, really.”

Bucher earned his Ph.D. in African history from the University of Minnesota-Twin Cities, where he was a MacArthur Scholar at the Interdisciplinary Center for the Study of Global Change. Currently, he is the coordinator for the African and African Diaspora Studies Concentration at Roanoke.

Roanoke College, which was founded in 1842 and chartered in Salem in 1853, occupies a key role in the preservation of this region’s history, Bucher said.

“There aren't really many institutions that existed in the 1840s that still exist today, other than the federal government,” Bucher said. “Even the local governments around here have changed their structure and their formation. We predate the railroads, we predate the banks, so we have this really unique experience and unique obligation that we have this line of connection that goes back to that time period.”

Miller is still on campus fairly often and is pursuing historical projects for the College. Linda Miller remains the College Archivist, and the two continue to piece together the story of Roanoke College. It’s something they’re used to.

“For 37 years, with the College Historian and the College Archivist living under the same roof, there's hardly a day that passes that we don't have six questions and something she's working on or something that I've been asked to do,” Mark Miller said.