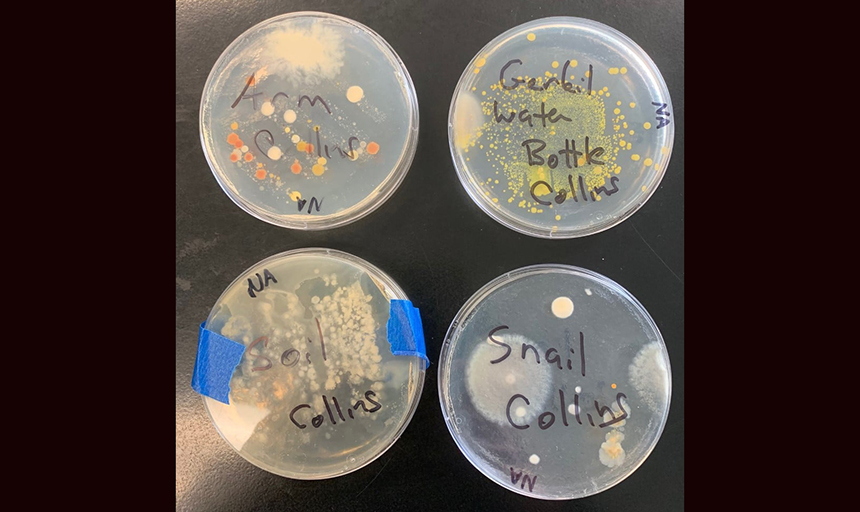 In a normal year of teaching her biodiversity course, Dr. Rachel Collins, associate professor of biology, does an assignment about bacteria where her students swab locations in their environment and streak nutrient agar plates. Typically, in a few days, the plates reveal the diversity of previously unseen organisms. Earlier this month, students with swabs in hand headed to sample high-touch areas such as doorknobs, tables and chairs.

“I noticed a few days later that nothing was growing on their plates — probably because of the increased cleaning of the academic buildings,” Collins said. “I mean nothing at all was growing on any of the plates.”

This great cleaning and disinfecting by the housekeepers has helped keep our campus community safe, but Collins still needed some bacteria for her class. So she had to get creative. She took swabs from her own forearm, from her pet gerbil’s water bottle, from her pet snail and from soil.

“The microbes did not let me down,” Collins said in a social media post. “Three days later there were a plethora of organisms for the students to see.”

Collins said the student samples did eventually yield some visible bacteria but it took much longer than in previous years.

Unprecedented times call for professors to quickly adapt to new conditions. Kudos to Dr. Collins and to Roanoke’s housekeeping staff for the good work!