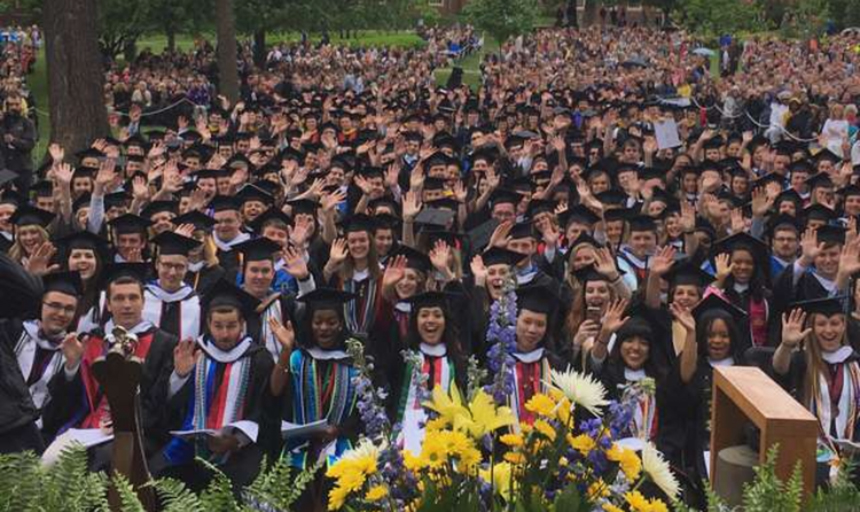 Roanoke College awarded degrees to 441 graduates on Saturday during the College's Commencement ceremony, held on the John Turbyfill Quad on a chilly and windy day.

"The life of a liberal arts college is to open your eyes to what undergirds, carries and what is deeper than the box that currently has your attention," said The Rev. James Mauney, the retiring bishop for the Virginia Synod of the Evangelical Lutheran Church in America. The Virginia Synod includes 148 congregations.

"Seeking the truths for which we're yearning," Mauney quoted from the Roanoke College Alma Mater Hymn. "That's not relative truth, that's not an alternative fact truth ... your raft in this ocean of mortality, your compass in this world. It is why we at Roanoke College want to talk about the whole person, the intellectual, ethical, personal and spiritual. We want a whole person in liberal arts, not a person with holes."

Rebecca Hudon of Harrisville, Rhode Island, was valedictorian for the class of 2017. Hudon, a finalist for the prestigious Rhodes Scholarship, is a pre-med student who majored in biology with minors in chemistry and music and a concentration in neuroscience. She plans to apply to medical school and hopes to become a general surgeon.

There were two salutatorians - Erin Keating of Whippany, New Jersey, and Stephanie Shields of Yorktown, Virginia.
Keating majored in Literary Studies and Creative Writing. This fall, she will attend graduate school at Drew University in New Jersey to earn a master's degree in history and culture.

Shields, who majored in psychology, with a concentration in neuroscience and a minor in German, is one of five Roanoke students who received U.S. Fulbright Awards this year. For the Fulbright program, Shields will live in Munich, Germany for the next year to research vocal learning in a bat species.

Donald Kerr '60, formerly a member of the College's Board of Trustees, received an honorary Doctor of Commerce degree. Kerr is president and CEO of Kerr Industries.

Beth Macy, a well-known Roanoke-based author, received an honorary Doctor of Letters. Macy, a former Roanoke Times reporter and author of two New York Times best-selling books, has won many national awards, including a fellowship at the Nieman Foundation for Journalism at Harvard University.