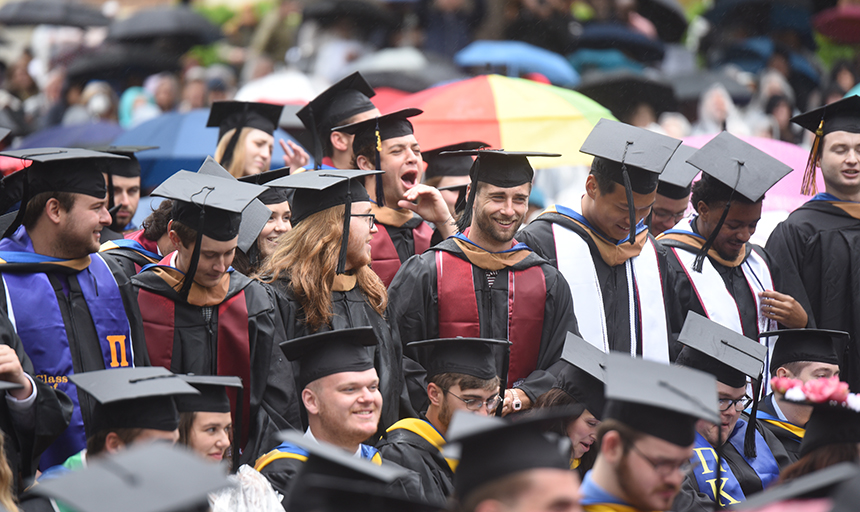 The Roanoke College community celebrated the Class of 2022 during commencement on May 7.

The forecast of rain was accurate, requiring guests to hold umbrellas and wear rain ponchos throughout the ceremony, which took place on campus on the Turbyfill Quad. Nonetheless, the occasion was joyous and full of celebration, and recognition.

Roanoke College President Michael Maxey presided over his final commencement ceremony as president. He will retire this summer after 15 years as president.

“You have the opportunity to become another greatest generation because of what you handled and the way you prevailed,” Maxey told the graduates. “That is your gift. There are always gifts that come from adversity and difficulty. Sometimes we call them silver linings. History and literature are filled with examples of heroism in response to adversity. In fact, heroism only happens in response to adversity. Only from being tested can we grow. Certainly, you have been tested.”

"It is the little things in life that matter the most,” Blair said in her valedictory address. “We've reached an incredible accomplishment today, and we celebrate every single small moment that has led us to this point. Every hour spent in the library, every wing night at Mac and Bob's... These are the things that we are celebrating today."

“Our class is a class of Silver Linings,” said Franz, who will enter medical school in the fall. “We persevered ... Even today, we are managing to find joy in this rain. Through a tumultuous college career, we've not only survived but thrived through the challenges we have faced.”

“While I don't claim to have mastered finding the good in the not so good, I'm confident the challenges we've faced as a class have prepared us to move forward in a way that makes Dear Old Roanoke proud,” he said.

“You have the opportunity to become another greatest generation because of what you handled and the way you prevailed.”

Haden, who will work for the Virginia Department of Health after graduation, said her time at Roanoke College has been an experience “nothing short of amazing.”

“I am extremely lucky to have gotten to know many of you, and what I know is that this Quad is filled with people who will do amazing things — people who are brave enough and strong enough to overcome any fear that gets in the way,” she said.

McDonald wished all mothers in attendance a “Happy Mother’s Day” and noted that her father asked her to be sure to tell everyone that, “I got my intellectual gift from my mother.” In closing, McDonald, who was involved in Roanoke College Choir and Theatre Roanoke College, said, “Thank you for your time here today and please support your local arts!”

Roberson, during her valedictory remarks, referenced the “incredible support” she received from faculty and administrators during her years at Roanoke, including President Michael Maxey who once stopped to help carry her groceries when she had stitches in her knee and was walking with a cane. It is that generosity “that makes Roanoke so special,” she said.

“I pray that we will be good stewards of what we have learned here, and that we will give to others in the same way that our professors, friends and family and everyone else here has given to us,” Roberson said. “We have been greatly blessed. May we now be a blessing to wherever life should take us next.”

Two students earned the honor of salutatorian: Sophia Albertina Kachur, a Pittsburgh, Pennsylvania native, who is graduating with majors in political science and Spanish; and Christopher Willis Rowsey, a business administration major from Roanoke, Virginia.

Three honorary degrees were awarded during the ceremonies. Dr. Peter Hotez, public health scientist and frequent media commentator during the pandemic, received an honorary Doctor of Science degree. Dr. Hotez has spent his career developing vaccines designed to attack a number of disease-causing human parasites. He is the Endowed Chair in Tropical Pediatrics at the Texas Children’s Hospital in Houston and the University Professor of Biology at Baylor University. Hotez is also the founding Dean of the National School of Tropical Medicine and is Professor of Pediatrics and of Molecular Virology and Microbiology at Baylor College of Medicine. He also serves as Co-Director of the Texas Children’s Hospital Center for Vaccine Development.

Roanoke College First Lady Terri Maxey was bestowed an honorary Doctor of Education degree.  Terri Maxey has been a beloved member of the campus community who is well known for her warm and personal relationship with students, faculty, staff and alumni. Before becoming First Lady of Roanoke College, she worked in financial aid for Averett University, Roanoke College and Jefferson College of Health Science and in student affairs for University of New Hampshire.

President Michael Maxey received an honorary Doctor of Humane Letters degree. Under his leadership, the College implemented the Intellectual Inquiry core curriculum, earned recognition as a top producer of academic scholarships such as the Fulbright and Truman scholarships, added eight new academic majors and an M.B.A. program, the College's first master's degree in more than 100 years. Maxey led several initiatives to diversify Roanoke College as well. He spearheaded the College’s Roanoke Rising campaign, which led to the construction of the Morris M. Cregger Center, a state-of-the-art athletic and academic facility. Five new athletic teams were added as well as e-sports and an expanded roster of club sports and outdoor adventure opportunities. Maxey retires this summer but will remain involved in higher education as the Chair of the Board of Directors for the Council of Independent Colleges.

Watch the entire ceremony on the Roanoke College YouTube.