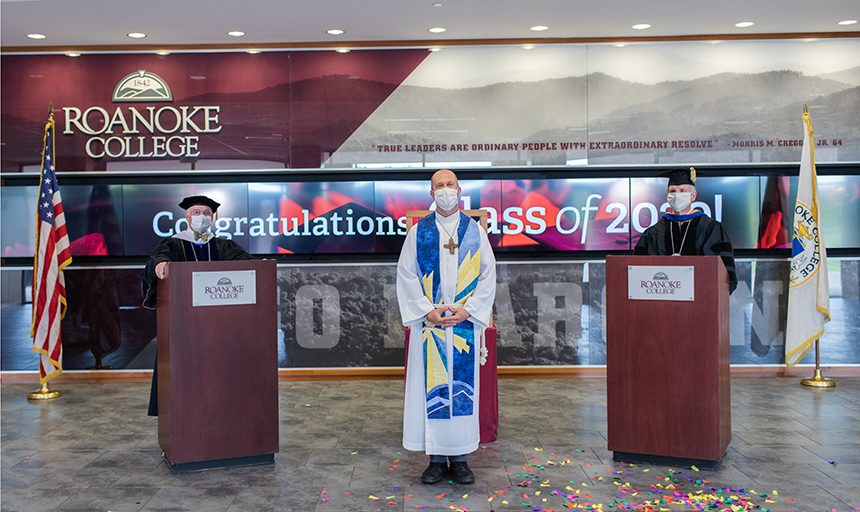 ‘Creators of history’: Just how historic is this year’s commencement delay?

During his address at the May 2 conferral of degrees ceremony, President Michael C. Maxey began by commenting on the Spring 2020 semester’s place in history.

The shift to remote learning in the middle of the semester, the lack of students on campus and the virtual conferral ceremony were all singular occurrences, Maxey said.

“You are creators of history in this moment,” Maxey told students in his address.

Just how historic was this virtual ceremony? The full, in-person commencement will take place at a later date yet to be determined, but the fact that commencement was delayed puts this year in fairly rare company. We turned to Dr. Mark Miller, history professor and David Bittle College Historian, and his book “Dear Old Roanoke,” which chronicles the College’s history from its founding in 1842 to the book’s publication in 1992.

The first commencement to be affected by a crisis was in 1861, when the Civil War broke out. There were no commencements until the end of the war, but the College remained in operation. The fact that Roanoke never closed is a source of pride for the College, Miller said.

During World War II, commencements were also altered. Instead of offering two graduation ceremonies (spring and winter), the College held three per year. The College had spent years preparing for the Spring 1942 commencement — which marked the College’s centennial — but the commencement ended up being a much smaller affair than planned. With rations on gasoline and other supplies, not as many people who lived outside the Roanoke area could travel to campus to celebrate the event.

A full class load was also offered year-round to get people their degrees as quickly as possible. In some cases, students were drafted into the military midway through their tenure at the College.

The College would quickly organize a ceremony to send off these students. It wasn’t a commencement, exactly, but it was a way to celebrate their time at the College before they left. Enrollment dwindled to about 50 people in 1944, and the College boosted its ranks by inviting women to attend the College. About 250 women enrolled that first year.

Once again, Roanoke had been tested, and once again, the College stayed open.

The next time commencement was affected was in 1970 amid growing unrest in the wake of the Vietnam War. After the bombing of Cambodia and campus shootings at Kent State and Jackson State universities, Roanoke College students wrote up a petition asking faculty to allow students to leave early.

Faculty agreed, allowing students to leave early and finish their schoolwork in the fall. Many students took advantage of this, and Miller says he believes commencement did take place that spring but in a reduced capacity.

As faculty said in their response at the time, “It is recognized that existing conditions are most unusual and require an unusual response.”

Roanoke is once again in unusual times, trying to adjust as a pandemic grips the globe. But as always, Maroons are doing their best to adjust and make choices for the safety and benefit of as many people as possible.

“In my 41 years, it’s been a remarkably different and difficult time,” Miller said. “We all have struggled with that and find ourselves without our usual moorings and rhythms and routines. It’s been a completely new experience for us old ones and the new ones too.”

“We all have struggled with that and find ourselves without our usual moorings and rhythms and routines. It’s been a completely new experience for us old ones and the new ones too.”

The May 2 conferral of degrees ceremony was broadcast via Facebook Live, and as many as 800 people watched live. In the two weeks it’s been up on Facebook, the video has reached nearly 30,000 people and has garnered more than 12,000 engagements.The Roanoke Times wrote about the ceremony, which conferred 429 degrees to graduates.

Students around the country watched the ceremony either on their computers or on their smart TVs. They posed for photos next to those TV screens, or wearing caps and gowns in their yard.

One of the class of 2020’s valedictorians Kyle Grohbrugge posted a video of herself giving a brief speech and then playing Survivor’s “Eye of the Tiger” on flute.

During his closing remarks, Maxey looked back to when he spoke to the students at their orientation four years earlier.

“What we imagined as your potential then, we see clearly with 20/20 vision today,” Maxey said. “There was something special then and definitely we feel that way this morning. You have been through a senior year that no one else has ever experienced. You see and understand life more clearly than ever. History makers are like that.”