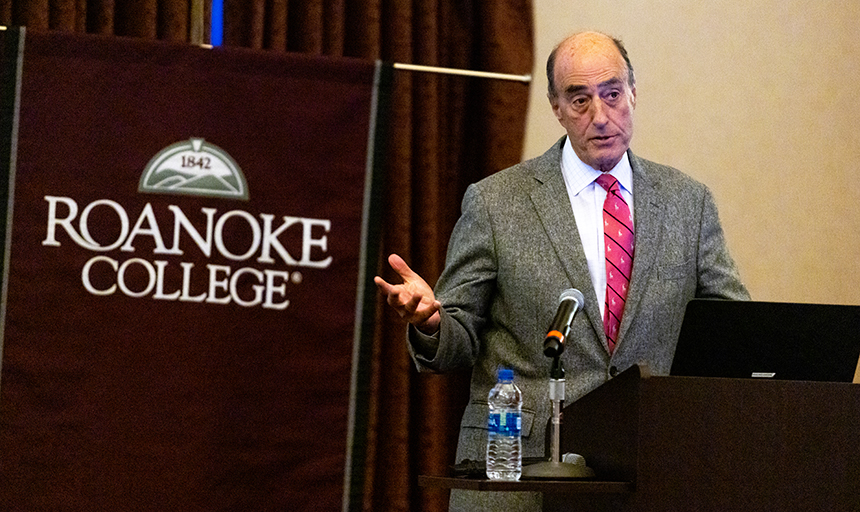 Trial lawyer Robert Fabrikant was the guest speaker for Roanoke College’s celebration of Constitution Day on Sept. 15. Fabrikant spoke about the life and times of U.S. Supreme Court Chief Justice Warren Burger, for whom he served as a law clerk.

Fabrikant outlined Justice Burger’s formative years and his pre-judicial career, which included time as assistant attorney general for the Justice Department’s Civil Division. “Burger was responsible for administering Brown vs. Board of Education in various jurisdictions around the country,” Fabrikant said.

Fabrikant discussed the legal aspects of important Burger decisions, including his role in civil rights cases such as Alexander vs. Holmes County, where the court rejected Mississippi’s efforts to delay complying with Brown vs. Board.

“That opinion was an alarm bell to Republicans,” Fabrikant said, because “Burger was viewed as a Republican lackey when he was appointed.”

“A number of Nixon’s agents were indicted for various federal offenses,” Fabrikant said. “During the investigation, Congress became aware that the Oval Office had a system where a tape machine would automatically go on when someone spoke. The Special Counsel wanted to get copies of the tapes because a number of people who would be on these tapes were people who had been indicted for criminal offenses. And Nixon himself was a potential defendant in these cases.”

That decision ultimately went to the Supreme Court. “The court’s unanimous opinion, that Burger authored, said even though there is such a thing as presidential privilege, it is not absolute privilege. Unless there was some issue of endangering a deployment, diplomatic issues or other issues, the tapes were admissible. Nixon resigned 16 days later.”

Before he left the stage, Fabrikant shared some personal reflections on what Burger was like as a person. He mentioned that while the court made decisions on gender equality, very few women law clerks worked for the court. However, Burger’s first law clerk was a woman.

Fabrikant told about how when Burger took over the court, each justice had a messenger to help deliver paperwork to other offices, do errands and assist the justices. Burger noticed that all the messengers were older Black men. Sometimes these messengers were even expected to do work for the justices at their homes and on weekends and evenings.

“It bothered Burger a lot, and he set out to try to fix that problem,” Fabrikant said. “One way he did this was to use unexpected funds, allocated from Congress, to increase the salaries of support staff, especially the messengers. Burger also stopped the practice of messengers serving lunches at justices’ homes and being expected to work at private events.”

Fabrikant said Burger and Alvin Wright, his messenger, had a very close relationship, and had lunch together almost every day. “It turned out that they both shared the same birthday, and Burger would have Alvin and his wife over to his home to celebrate their birthday. So they shared birthday parties for many years, and it turns out that their birthday was September 17, which is also Constitution Day.”

Fabrikant also announced that Todd Peppers, the Henry H. and Trudye H. Fowler Professor of Public Affairs, has agreed to write a biography of Burger.

“Todd has agreed to take on a very daunting task,” Fabrikant said, “which is to write, along with my co-clerks, a biography of Chief Justice Burger, who is the only chief justice about whom a biography has not been written.”

Fabrikant is senior counsel at the Los Angeles-based law firm of Manatt, Phelps and Phillips, LLP. He is a graduate of the Georgetown University Law Center and the University of Pennsylvania.

Constitution Day is an annual commemoration of the signing of the U.S. Constitution on September 17, 1787. Roanoke College hosts an event each year around September 17 to mark this important date in the history of the United States.