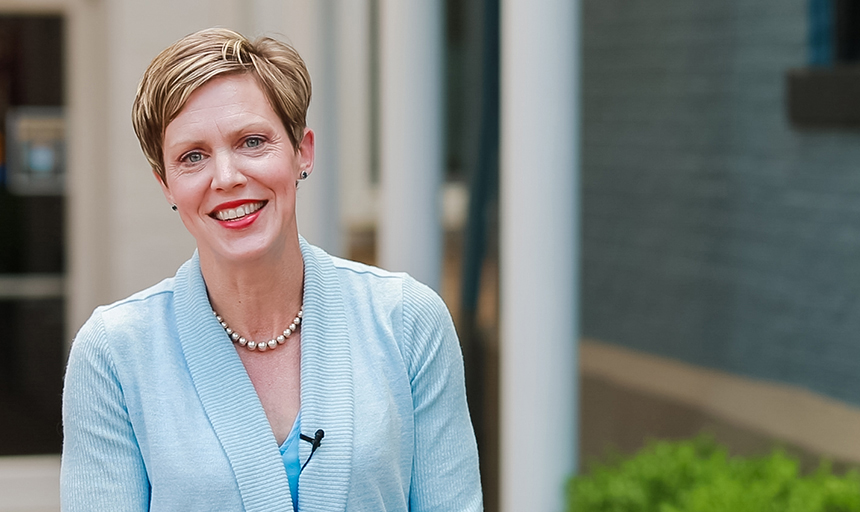 As the COVID-19 pandemic descended on the world in early 2020, Dr. Alice Kassens could see the stress weighing on everyone around her.

Kassens, John S. Shannon Professor of Economics at Roanoke College, noticed anxiety on the faces of students and other community members. When the U.S. Census Bureau began releasing survey data on how Americans were dealing with the mental burden of the pandemic in April 2020, Kassens saw an opportunity.

“It got me thinking, ‘Boy, what a great time to study this,’” Kassens said. “Looking at our students and the people around you, you can tell things are weighing on each other.”

A year later, Kassens has co-authored a study titled “Mental Health Crisis during the COVID-19 Pandemic” that tracks the mental health impact of the pandemic. The study was released May 11 by the Century Foundation, a progressive and independent think tank that conducts research, develops solutions and drives policy change in education, health care and the workforce.

Kassens authored the study alongside Jamila Taylor, the director of health care reform at the Century Foundation, and William M. Rogers, a professor of public policy and chief economist at the Heldrich Center for Workforce Development at Rutgers University.

The study is based on Census data, which Kassens said is reliable, plentiful and free. The Census Bureau surveyed tens of thousands of Americans per week in 2020 about their mental health, leading to a dataset that includes more than two million Americans.

Among many other findings, the study revealed that moderate to severe anxiety increased by six times in Americans in 2020 and levels of depression increased by similar rates. The study also found that there were greater impacts on young adults, ethnic minorities and those experiencing poverty. From an economic standpoint, Kassens said, the impact on young adults might affect them for their entire working life and could result in decreased productivity for decades to come.

The study asserts that while the U.S. government has made a commitment to boosting the economy and caring for citizens’ physical health, not enough has been done for Americans’ mental health. In fact, the study argues, mental health has long been overlooked.

“Hopefully policymakers including the Biden administration will listen because our findings are important. This is a massive issue that should be addressed.”

Lawmakers have taken notice of the crisis, as Congress passed and President Joe Biden recently signed the $1.9 trillion American Rescue Plan Act of 2021, which makes a major commitment to improving mental health care nationwide. The economy has also begun to rebound, but Kassens and her fellow researchers argue that it’s vital that the federal government makes a nationwide commitment to better mental health care.

“Against this backdrop of a slow economic recovery, it remains critical that the nation focus on initiatives that address mental health,” Kassens and her co-authors wrote. “The pandemic’s impact on mental health has spotlighted the challenges that Americans have faced for years, revealing the inadequacies of the nation’s health care system to provide much-needed mental health care. What was a serious concern before the pandemic has now transformed into a major public health crisis.”

On Roanoke’s campus, mental health has been a major priority. In addition to in-person services from Student Health and Counseling, Roanoke also added a telehealth option this academic year called MaroonCare, which gives students 24/7 access to a dynamic medical and mental health resource. These online visits are provided at no cost to all Roanoke College students who live on campus. Since MaroonCare’s introduction in November 2020, nearly 200 students have signed up for the service.

Kassens said caring for one’s mental health is a vitally important task and she hopes the study can reach decision makers across the country.

“Hopefully policymakers including the Biden administration will listen because our findings are important," Kassens said. "This is a massive issue that should be addressed."

May is Mental Health Awareness Month, and Roanoke College understands exam season is a stressful time for many students. Through MaroonCare and our Student Health and Counseling resources, students can get any assistance they need.