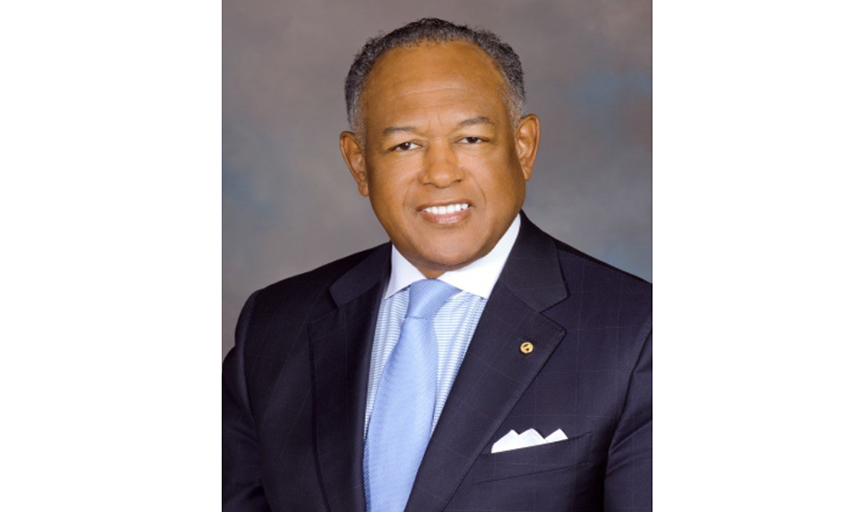 “Then Esther sent this reply to Mordecai: ‘Go, gather together all the Jews who are in Susa, and fast for me. Do not eat or drink for three days, night or day. I and my maids will fast as you do. When this is done, I will go to the king, even though it is against the law. And if I perish, I perish.’” Esther 4:15-16 (NIV).

Progress, he recalled, “was on full display.” Attending dignitaries included a Black lieutenant governor, a Black president pro tem of the Virginia Senate, a Jewish speaker of the House, and a Black chair of the Finance & Appropriations Committee, said Jones, himself, a member of the Virginia House of Delegates from 1994 to 2009 and mayor of the city of Richmond from 2009 to 2016.

The sight brought tears to his eyes.

“There was nothing like that kind of involvement when I was in the General Assembly,” Jones said during his virtual keynote Martin Luther King Jr. Day address on Jan. 17, sponsored by Roanoke College. “No doubt, we had made progress.”

But that memory called to mind some uncomfortable truths. The appearance of progress on that day, at that particular event, did not necessarily reflect similar progress everywhere and with everyone.

And he remembered Dr. King, who “went to Memphis to work for sanitation workers, men whose job was to pick up trash,” said Jones. King “did not think it was beneath him, a graduate of an Ivy League school, to go to Memphis.”

And he referenced the words of Esther, in the Bible the young woman made queen whose step of faith eventually led to the freeing of Jews from oppression, exemplifying that the faith of one person can lead to the rescue of many: “And if I perish, I perish.”

“The truth of the matter is we have a marvelous opportunity now to change things that need to be changed in the world today, particularly in a college community, where young people are,” said Jones, who serves as senior pastor of the historic First Baptist Church of South Richmond. “There’s an opportunity for us to sow into them seeds of ‘If I perish’ moments, allowing them to do what is needed to make this world a better place in which to live.”

Jones said he hoped the King Day observance at Roanoke College produced some “If I perish” moments for those attending the virtual program, hosted and moderated by Teresa Ramey, vice president for community, diversity and inclusion at Roanoke, and Natasha Saunders, director of multicultural affairs.

For Jones, those moments were inspired by Adam Clayton Powell Jr., pastor of the prominent Abyssinian Baptist Church in Harlem who was the first Black American elected to Congress from New York. Powell became a powerful U.S. congressional leader.

At the time, it was unheard of for a minister to be “untraditionally” involved in the activities of the city of Richmond, Jones said. But he chaired the Richmond City School Board, then ran for, and won, a seat in the state House of Delegates, serving for 15 years before serving nearly a decade as Richmond’s mayor.

“The truth of the matter is we have a marvelous opportunity now to change things that need to be changed in the world today, particularly in a college community, where young people are.”

During his tenure as mayor, a number of public works projects were completed, including the construction of new schools, fire stations and a new Richmond City Jail, which replaced an overcrowded and aging structure that was fraught with safety issues.

“Nobody wanted to touch that because there are no brownie points for building a jail,” Jones said. “But I had an ‘If I perish’ moment to make sure even those who were incarcerated did not lose their life because the city was not being attentive to their needs.”

The truth is, Jones said, current conditions again present opportunity for “If I perish” moments. When the school-to-prison pipeline is a reality; when health, economic and educational disparities rob children and families of their well-being; when “draconian laws” make it difficult for people to exercise their right to vote; when we have reached “a pivotal time in our nation,” Jones said.

“It is important to recognize that Dr. King is part of the continuum,” Jones said. “While we celebrate his greatness, we’ve got to recognize the innate desire within each of us for equality and for a sense of personhood. Our job is to stand on Dr. King’s shoulders and make sure change occurs in the communities in which we live.”

“Today is a reminder we, too, are called to have a ‘King’ moment, an ‘If I perish’ moment. Even as calendar turns to 2022, the battle is not over, the victory not yet won,” Jones said. “Why?  Because we remain in a critical moment, a moment Dr. King suggested remains true to this day, when we are confronted with an unfolding conundrum of life and history where there is such a thing as being too late, and there is no time for apathy and for complacency.”

“If [Martin Luther King Jr. Day] is going to mean anything at all, it’s for us to find our voice and speak up, speak out, and embrace the ‘If I perish’ moments.”