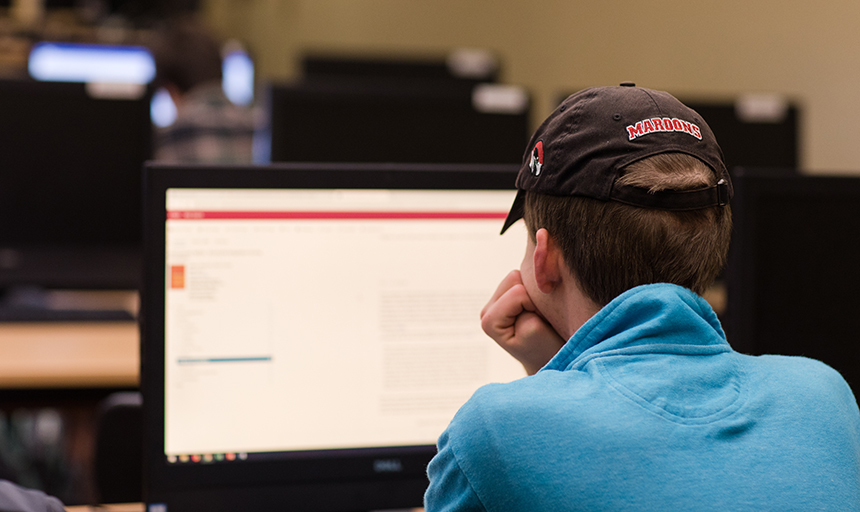 Jake Beardsley ‘22 is thinking like an NBA general manager.

Beardsley, a mathematics and economics major, is researching the way that changes in the NBA’s schedule have affected players’ health. With the season starting later than usual due to the COVID-19 pandemic, teams have had to play more games in a shorter amount of time. Playing so many games so close together, Beardsley has found, is resulting in more injuries.

He’s already thinking like a real-world researcher, which he hopes will give him a leg up when he’s applying to graduate schools.

“I’m sure some number of NBA teams’ executives have said, ‘Hey, do you think that playing more games in a shorter period of time will make players get hurt more?’” Beardsley said. “I think doing it in an academic context really brings a lot of value in terms of developing your professional self, your resume. Stuff like that I think is really critical especially as we see more people going to grad school, so grad programs are getting more competitive.”

Beardsley’s project is part of ECON LAB, a program that allows students to conduct real-world research in a somewhat relaxed setting. Dr. Alice Kassens, John S. Shannon Professor of Economics at Roanoke, is the advisor for the program. This is the first year for ECON LAB, which involved eight students in the fall semester and six students in the spring semester.

Students can choose their topics. While Beardsley sifts through injury reports and calendars, Quinn Keatley ‘22 is researching which businesses are thriving during the pandemic versus which businesses are suffering. Meanwhile, Naomi Painter ‘22 is looking into ties between unemployment and education.

Kassens said she’s seeing students pursuing their projects with enthusiasm in part because there’s so much freedom in the program. While independent study projects and honors distinction projects are great to work on, this informal setting works out well for many students, she said.

“I wanted to do something a little less structured, less pressure on the students, and just really let them have fun and let them loose — and they’ve not disappointed,” Kassens said. “Both semesters they’ve come up with these really great ideas on a wide range of topics.”

“I think doing it in an academic context really brings a lot of value in terms of developing your professional self, your resume. Stuff like that I think is really critical especially as we see more people going to grad school, so grad programs are getting more competitive.”

The program is not reserved for economics majors. Keatley, for example, is an actuarial science major. She said ECON LAB gives her an opportunity to explore her own research topic while learning from others.

Students involved in ECON LAB have also gotten exposure for their projects. In November, ECON LAB hosted a mini-conference where everyone in the program presented their findings via Zoom. In February, student researchers Theo Bookheimer ‘21 and Eric Lee ‘21 presented alongside Kassens and assistant professor of business administration and economics Michael Enz at the 32nd annual Teaching Economics Conference, hosted by Robert Morris University. They spoke about the challenges and adaptations made when switching from in-person learning to virtual learning at the outset of the pandemic.

Beardsley, Keatley and Painter all agreed that their research will give them a leg up with what they want to do in the future. Painter said ECON LAB is an example of Roanoke College offering exactly the type of opportunities she expected.

“Research was probably the main draw for Roanoke College, and to be able to continue it farther than I expected, into economics, has been really eye-opening and really encouraging,” Painter said.