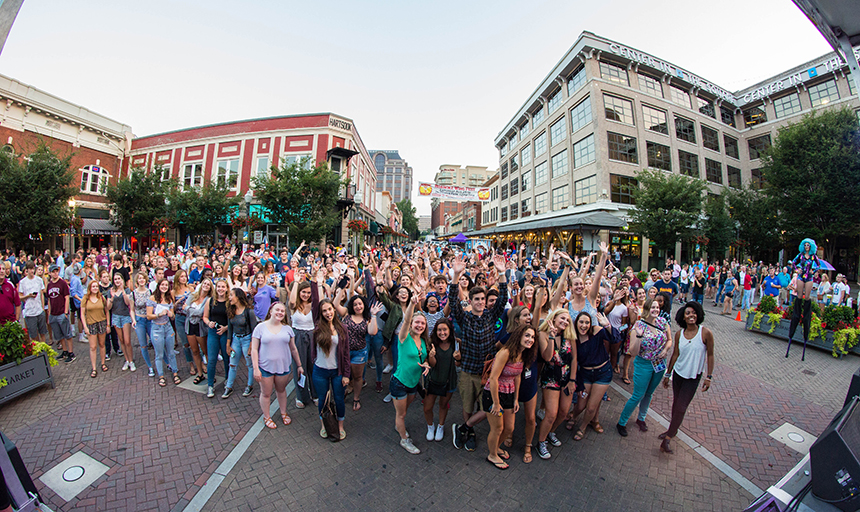 ‘Learn your hometown all over again’

Growing up in Roanoke, Olivia Kitt ‘20 had never found the Mill Mountain Star or the Blue Ridge Parkway that fascinating.

Then she went to Roanoke College, and saw the way that out-of-state students flocked to the Star and the Parkway. They became hangout spots for her college friends, she said, and she gained a new appreciation for the place where she grew up.

“One of the beauties of Roanoke is you get to learn your hometown all over again,” Kitt said.

Kitt, who graduated from Patrick Henry High School and served as SGA president during her time at Roanoke, said she’s had a great time making new memories in Roanoke and even learning about new places she’d overlooked.

Attending Roanoke College allows local students such as Kitt to form a different perspective on their hometown, and to share their home with students from all over the world.

Tyler Derrick ‘20 is not only a local student. He’s also a local Lutheran.

He grew up coming to campus for Lutheran events and services, so Roanoke College was on his list from the beginning of his college search. He applied elsewhere, but settled on Roanoke in part because of how much the admissions office reached out and what a good job the school did of communicating with him.

Though the comfort with the school was a major factor in Derrick choosing to become a Maroon, the prospect of experiencing the College in a different way had Derrick looking forward to his college career.

“Roanoke College wasn’t a foreign place to me,” Derrick said, “so part of what excited me about the whole Roanoke College experience was figuring out what this place like as an actual college and not as a place for retreats and meetings and camps and that sort of stuff.”

“Part of what excited me about the whole Roanoke College experience was figuring out what this place like as an actual college and not as a place for retreats and meetings and camps and that sort of stuff.”

Derrick lived on campus and said it ended up being “the best choice,” as he got to live as a college student instead of a local who is commuting to college. He acknowledged that commuting is a better option for some people, but he enjoyed the fact that he got to experience the College and the area on his own terms.

Even though he grew up nearby, Derrick said Salem was still fairly uncharted territory.

“Just because I’m from Roanoke, I hadn’t spent a ton of time in Salem specifically,” Derrick said. “That ended up being a lot of fun, to get to know Salem a little better and figure out all the fun, cool restaurants, the fun and cool hangout spots, that sort of stuff in Salem.”