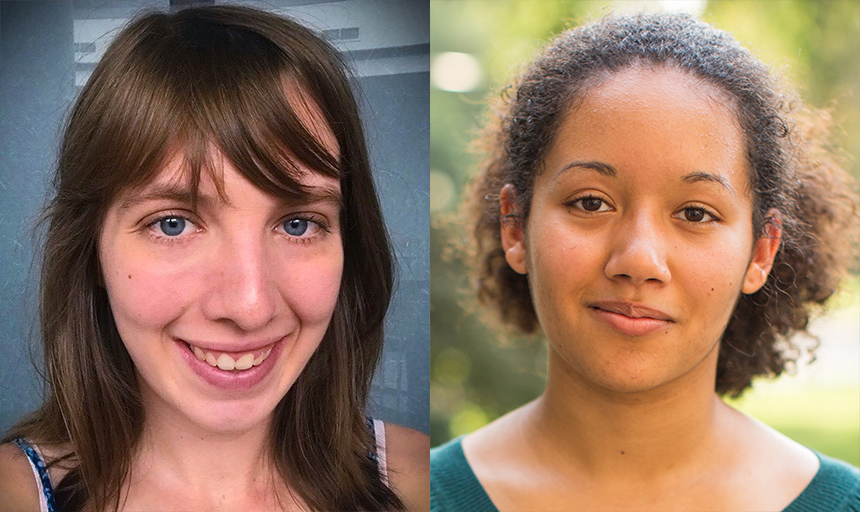 Serayna Green, '22, left, and Autumn Coleman '22, are planning to study in Asia next year.

Two Roanoke College students have been awarded the Freeman Awards for Study in Asia, which provide scholarships for U.S. undergraduates to study abroad in East or Southeast Asia.

Autumn Coleman ‘22 and Serayna Green ‘22 were selected to go to China and Japan, respectively. With Roanoke’s fall study abroad programs canceled due to the COVID-19 pandemic, both students are making plans to go in 2021.

Coleman and Green are business administration majors, and both hope their upcoming experiences in Asia teach them more about the real-world application of what they’re learning in their classes at Roanoke.

Coleman’s program will be in Shanghai. A business administration and biology major working on a philosophy minor, Coleman has been learning Chinese for three years. She’s looking forward to living on her own in Shanghai, so she can truly immerse herself in the culture.

Though she wants to live on her own, she’s looking forward to networking with other students in the program.

Green will be studying at Kansai Gaidai University between Osaka and Kyoto, Japan. She, too, plans to spend a great deal of time outside the program learning about Japanese culture. Green’s Honors Distinction Project is about a 20-year recession (1991-2010) in Japan that’s often called the Lost Score.

In Japan, she hopes to make good progress on her project while also gaining real-world advice.

“I wanted to analyze the Lost Score itself, and then I’m going to be interviewing with business owners to figure out how they handled their managerial business-making decisions during the time,” Green said. “That’s what I’ll be doing in the future, so it would be a great way to learn from them while also doing a research project that is still kind of relevant.”

Carmen Boggs-Parker, assistant director of International Education, has worked extensively with Coleman and Green on their applications, and was elated to see them earn their awards. Boggs-Parker described Coleman as “humble, hard-working, polite, kind and conscientious.” Green, she said, is “whip-smart,” someone who “does not back down.”

Roanoke has had five students selected in the past seven years for the competitive program, said Jenny Rosti, director of Major Scholarships and Fellowships. She also is looking forward to Coleman and Green going abroad next year.

“Both are going to be outstanding representatives of the best we have to offer,” Rosti said, “and both will take full advantage of the opportunities these experiences will offer them.”