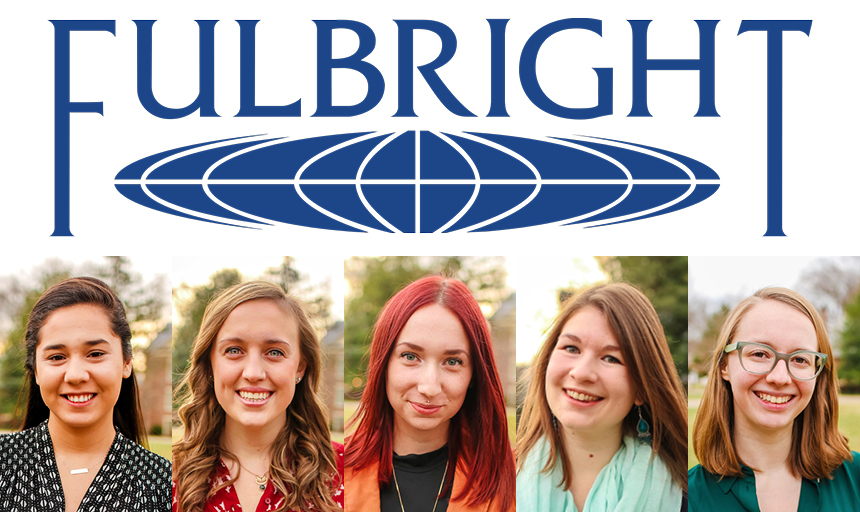 Roanoke College students have earned a record number of Fulbright awards this year. Five students, all women, learned this month that they would be doing research and studying in Austria, Spain, Mexico, Germany and Scotland with the prestigious Fulbright program.

In addition to these awards, Roanoke students were finalists for Fulbright, Marshall and Rhodes scholarships - programs so selective that being named a finalist is an honor few receive.

Savannah Scott '17 accepted a Fulbright study/research award to the University of Technology of Vienna, Austria (the Technische Universität Wien.) Scott, who is from Huntington, N.Y., is Roanoke's first Fulbright to a European country.  She is a biology major, with minors in chemistry and French and in the Honors Program. She will be studying water quality in Austria from October 2017 to June 2018. Austria awarded only seven Fulbright research awards this year and Scott successfully competed against students with masters degrees and Ph.D. students.

Kristen Wicander '17 has a Fulbright Student Award as an English Teaching Assistant (ETA) in La Rioja, Spain. Wicander, originally from Moodus, Connecticut, is a Spanish and psychology major.  Wicander's Fulbright program covers an academic year, where she will be working with children ages 6-12 teaching English, as well as social studies, science, and American culture. In addition to teaching, Wicander will be active in the Spanish community and take classes to fully immerse herself in the culture.

Edyth Cisneros '17 also earned a Fulbright Student Award as an ETA to Mexico. She'll be teaching English there for an academic year starting in September. She will begin in Mexico City and then move to her permanent ETA placement. Cisneros also will be working on a mini documentary series about the other side of immigration - those left behind.

Stephanie Shields '17 has been selected for a 2017-18 Fulbright U.S. Student Award to Germany. She will be doing research in the lab of Dr. Lutz Wiegrebe at Ludwig-Maximilians-Universität München in Munich, Germany.  Shields will contribute to the work of Dr. Wiegrebe on vocal learning - the capacity to learn to produce new sounds through imitation - in the bat Phyllostomus discolor. She is a psychology major with a neuroscience concentration and a German minor. Shields, who is from Yorktown, has been conducting research at Roanoke with Dr. David Nichols for several years. Last year, she spent the summer with the German Academic Exchange Service's Research Internships in Science and Engineering. There in Hamburg she was a research intern at the Universitätsklinikum Hamburg-Eppendorf (UKE). After her Fulbright work, Shields plans to earn a Ph.D. in neuroscience.

Brieanah Gouveia '17 has received a Fulbright Study Award to Scotland's University of Glasgow for an art history program titled Collecting and Provenance in an International Context. The program is split between classroom and field work, dissertation research, as well as work placement where Gouveia hopes to get experience from a law firm on art-related alternative dispute resolution, or in a provenance section of an auction house or museum. Gouveia also plans to be a researcher in the University's Trafficking Culture project. She will obtain a masters degree as part of her Fulbright experience. Gouveia, who is from Waimea, Hawai'i, is an art history major with concentrations in legal studies and the classics and ancient Mediterranean world.