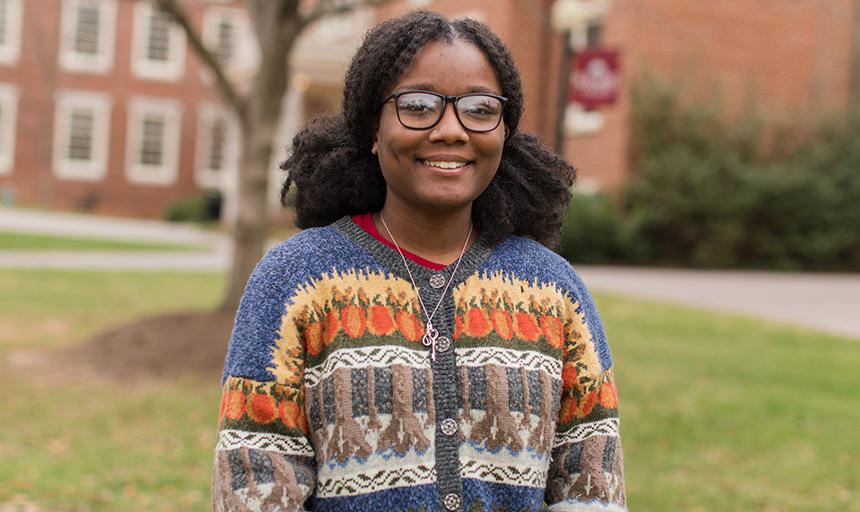 After studying in Taiwan for more than a year, Janiah Tillery ‘21 is extending her stay thanks to a prestigious award.

Tillery, who arrived in Taiwan in February 2020 on a Benjamin A. Gilman Scholarship, earned a Fulbright Scholarship that will allow her to teach English in Taiwan for the next year. She’s planning to come back to Roanoke College for graduation later this month and will fly back to Taiwan at the end of July. She’ll go through a month of training and then help teach a class of about 25 students until June 2022.

Tillery, a history major with an East Asian studies concentration, has her sights set on one day working in Chinese-English translation. She wanted to study in Taiwan because there, she could focus more on becoming fluent in the language. Study abroad programs in China tend to focus more on business than on the language, she said.

“I liked Taiwan during my time with the Gilman, so doing the Fulbright in Taiwan, I can continue to enhance my Chinese skills,” Tillery said. “Also, I wanted to choose Taiwan because I still like it.”

Tillery, from Baltimore, Maryland, has been studying at Providence University in Taichung City, Taiwan through her Gilman scholarship. Tillery said one of the best parts of her experience in Taiwan is meeting people from all over the world.

“I have friends now in Japan and Germany,” Tillery said. “I’m a pen pal with one of my friends in Japan. I think I’ve made some lasting relationships with people from different countries. I talk to them on the phone from time to time. That’s why I’m glad I did study abroad, so I could make more friends from all over the world.”

“I think I’ve made some lasting relationships with people from different countries. I talk to them on the phone from time to time. That’s why I’m glad I did study abroad, so I could make more friends from all over the world.”

Stella Xu, professor of history and Tillery’s advisor, has watched Tillery grow since her freshman year at Roanoke. Xu said she’s been impressed by Tillery’s tenacity and work ethic.

“Janiah’s strength is her exceptional resilience and open-mindedness,” Xu said. “She knows what she wants and is always determined to work around all sorts of difficulties.”

Among those difficulties has been the COVID-19 pandemic. Tillery said she has felt very safe in Taiwan, where residents have been extremely diligent about wearing masks and maintaining social distancing. When she got homesick a few months ago, Tillery said, she decided to stay in Taiwan instead of coming back to the United States, where the virus has been much more prevalent.

Tillery’s also had to deal with a 12-hour time difference. She’s continued to take online classes with her Roanoke classmates and has tried to attend classes at the same time as everyone else, even if those classes are in the very early hours of the morning (Taiwan time). Professors have been flexible though, figuring out ways for her to keep up with classes even if she can’t attend virtual lectures in the middle of the night in Taiwan.

With help from Xu, other professors, and Director of Major Scholarships Jenny Rosti (who gave Tillery honest and constructive feedback on the lengthy Fulbright application), Tillery has been able to make the most of her time in Taiwan and welcomes the opportunity to extend her stay, thanks to the Fulbright award. She said she might even consider extending it further if possible.

Xu said she’s witnessed Tillery deeply explore her interests during her time at Roanoke. She credits Tillery’s drive and the resources that are in place at the College.

“She came to Roanoke College with prior interest in East Asia,” Xu said. “However, I believe it is at Roanoke College, with wholehearted and unflagging support from multiple faculty members, that has helped her prosper and get closer to her dream, step by step. Roanoke College is a place that always helps our students aim high and achieve more.”