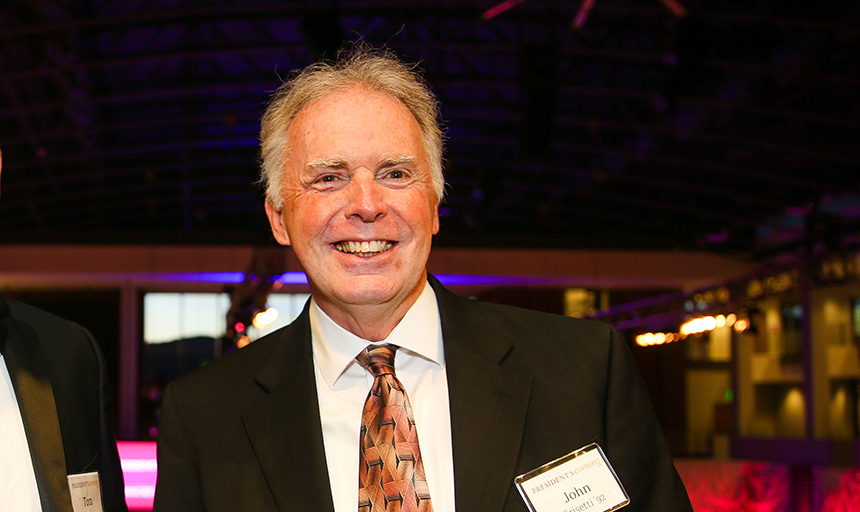 Grisetti was hired as a sergeant in the campus safety office in November 1987. He attended Roanoke as well and graduated in 1992 with a bachelor of business administration.

Over his thirty years in Campus Safety, Grisetti has seen the office go from a security guard office to an unarmed security office, then to an armed security office and finally to what we see today - a professional campus law enforcement operation. Officers now receive police academy training, if they don't have it already, as well as more stringent requirements. The office also has grown from having six officers to eight officers.

Roanoke's campus has grown and changed a lot over the years too. Elizabeth campus was added early in Grisetti's tenure. The whole Kerr Stadium end of campus is mostly new to what was in place when he arrived - Kerr Stadium, Caldwell, Beamer and Rytter Halls as well as New Hall.

"One of the big challenges has been keeping up with technology," Grisetti said. "We try to stay out in front and use the technology available. Today we have card access to many buildings, camera systems and even body cams on our officers." Maroon Alerts is another service technology added to the campus.

Grisetti is especially proud of being on the cutting edge of bicycle patrols in the Roanoke Valley. The College was only the second law enforcement organization to implement bike patrols, after Roanoke City started using bikes. Grisetti taught in the bike patrol program at Cardinal Criminal Justice Academy for several years to help others learn the best practices for using bicycles in law enforcement.

Grisetti also praises the longstanding great relationship Roanoke College has with the City of Salem and particularly Salem Police Department. "It's really a benchmark for the state of Virginia," he says.

Grisetti was a police officer and then a detective with Prince George County, Maryland and he worked at the FBI before coming to Roanoke College.

Finally, we asked him what he would miss or not from his Roanoke College time.
"I'll miss the friendships, both professional ones and personal," he said. "I'll miss the interaction with the students and helping them to make better decisions. That can sometimes be tough but then rewarding years later when you learn that your interaction with them might have been a turning point in their lives. I will also miss our officers," he said. Grisetti also said he would miss using his skill set, especially when he put it to use in closing tough investigations.

Grisetti will NOT miss things like "3 am phone calls saying I have to go to the hospital or deal with a case," he said. "Also, hiring and training new officers." Grisetti said the recent model of hiring experienced officers means less training and the officers tend to stay longer.

"I also won't miss not being able to attend kid things or grandkid things. If the birthday party is on Alumni Weekend, now I can say, ‘I'll be there!'" He's looking forward to more family time. His three children are in Portland, Oregon; Los Angeles; and Virginia Beach with two grandchildren in Virginia Beach. His wife, Pat, is retired from the U.S. Attorney's office in Roanoke and reportedly is compiling a "Honey Do" book (not just a list) to fill his retirement days.

"It's been a good run," Grisetti said. Thanks for your service to Roanoke!