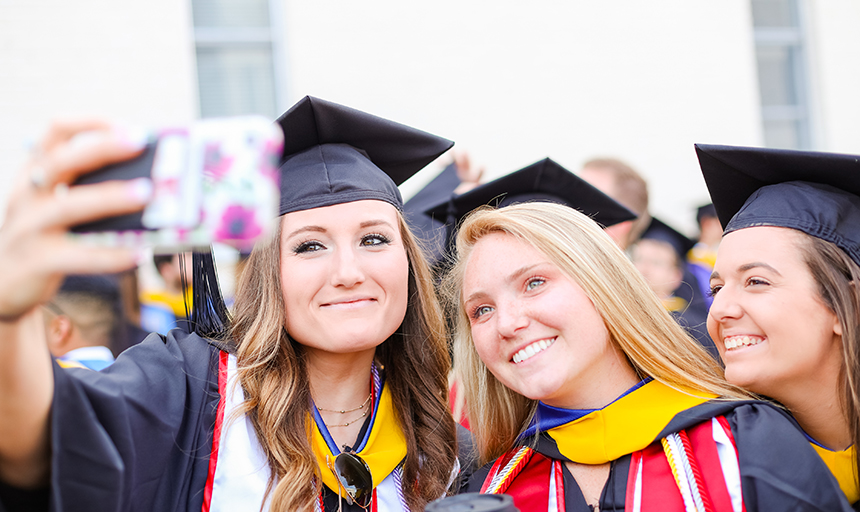 Which high school did you go to in the area?
Lord Botetourt

Did you wanna go to a bigger school when you were in high school?
Definitely. I was definitely looking out of state. I only applied to three schools. I applied to University of Virginia, East Carolina and College of Charleston.

What made you pick East Carolina?
It was actually my second choice. College of Charleston was my first. I got into both, but Charleston was seven hours away and it was kind of a scary thought. I couldn’t have my car on campus, so I couldn’t freely go home if I got homesick. It was also incredibly expensive. ECU, I actually had a friend from home that was going there, so that was kind of comforting. I also really liked the campus a lot and I was going to get that, you know, football experience and whatever. I really enjoyed my tour that I did and it was only five hours (away), which kind of made the difference. I could also have my car there, so it worked for me at the time.

What led you to want to transfer to Roanoke?
My dad actually works on campus. He’s in the Campus Safety office, so I was already familiar with it to begin with. But I just was not doing well at East Carolina, mentally and academically, at all. I just hadn’t adapted. My sophomore year, first semester, I was literally going home almost every weekend. It just wasn’t going well for me. I wasn’t doing well with the big classes at all. It was really frustrating. My grades were slipping and I was not where I wanted to be. My dad kept saying, ‘You really should try and transfer and apply. I think you would make a difference being closer to home, the smaller classes, I can have you talk to some people.’ I was actually really hesitant at first. I knew I needed some type of change, but it was really scary going out of your comfort zone that you’d established.

When did you transfer?
It was my sophomore year, halfway through.

The class sizes were obviously a big difference, but what were some of the other major differences between Roanoke and ECU?
Before I’d even gotten on campus, I had professors I didn’t even know reaching out to me and welcoming me to campus and saying, “If you need any help or assistance, just let me know,” which I was amazed by. My professors at ECU barely knew me. Even when I tried to get to know them, they just weren’t having it, which I get. With 200 kids, that’s a lot. But I just liked the community (at Roanoke). Everybody was very welcoming, no matter what, no matter where I was. In my classes, especially, I made a lot of friends. I ended up joining a sorority, Chi Omega, on campus and that really took me out of my comfort zone. It’s not something I ever thought I would do, but it made a difference. Roanoke really made me become more outgoing and social than I ever expected. I’ve always been pretty quiet and kept to myself. Everyone influenced me to meet new people. Everyone’s so nice and welcoming. It was refreshing.

How has it gone going to school so close to home?
I lived on campus. People asked me why, but what college kid wants to live at home? I didn’t see my parents when I was at Roanoke nearly as much as I did when I was five hours away from home. I was always out with friends and doing stuff. I saw my dad, of course, because he was on campus. We’d stop and get lunch from time to time. But my parents would be like, “Are you ever coming home for the weekend?” And I was like, “Maybe next weekend.”

“Before I’d even gotten on campus, I had professors I didn’t even know reaching out to me and welcoming me to campus and saying, 'If you need any help or assistance, just let me know,' which I was amazed by.”

What else have you liked about Roanoke just in general?
I really like that, as much as people probably hate it, the INQ classes. It’s nice. You get so stuck in your major courses, it’s almost like you’re tired of it after a while, as weird as that sounds. It’s nice to have something different, and makes you think outside of what you’re stuck to. Also, having more grades in the classes, because they’re smaller, you have more opportunities. If you do badly on a test, you can maybe bump it up with some of these other assignments you have going, which I don’t think a lot of people realize. I had an anatomy course, we had five grades total for the semester and they were five exams, total. That was it. So it really makes a difference and honestly helps you learn more. It helps me, at least, understand the material more. Being able to become closer to your professors was really nice, like actually getting to know them, passing them on campus and having them actually know your name, seeing them in Commons and them being able to stop and talk to you. They truly do care. I could tell the difference in terms of, a professor on campus wants you do to well and will take the time out of their day to sit and help you understand, but also wants you to enjoy it in the same sense. I also like how Roanoke had a lot of activities on campus. I was constantly doing stuff and meeting people, which at ECU, I didn’t have a ton of.

What did you major in?
Health and exercise science.

When did you graduate?
I graduated last May. I’m taking a class through Roanoke right now for a pre-rec that I need for nursing school, actually.

If you were talking to high school students in the area who wanted to go to a big school and get that football experience and everything, what would you say to them to convince them to give Roanoke a chance?
I really wish I’d given a small school a chance, at least applied, because I definitely didn’t. Everyone was all about the big schools, but I really do think small schools get put to the side sometimes when they shouldn’t. I was 10 times happier at Roanoke than I ever was at my big school. You have more opportunities to get to know people, even in terms of internships and jobs, you meet so many people with so many connections. I was way more involved at Roanoke on campus, because it’s easier. It’s a huge difference. The football thing is fun at first, then after a while you realize it doesn’t matter. It isn’t as big of a deal. It’s something, definitely, to consider when applying. It’s not something to forget about. I don’t regret anything about transferring. It was probably the best decision I ever made.