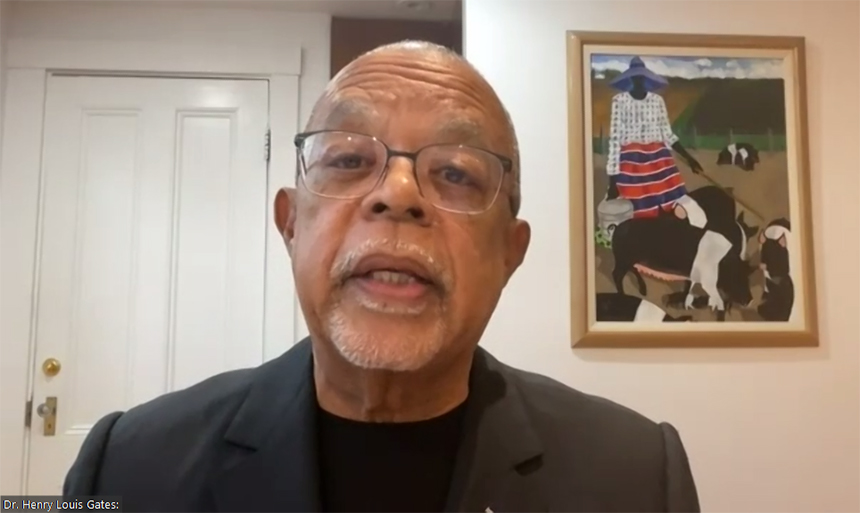 Gates speaks to students, community about Reconstruction and learning from history

On Tuesday night, one of the nation’s preeminent scholars on race and Black American history spoke to Roanoke College students and the community.

In his talk, titled “The Rise and Fall of Reconstruction,” Gates spoke about the white supremacist backlash to Black freedom, particularly about how many Southern states passed laws to make it harder for Black Americans to vote. The effects of the racist reaction to Reconstruction are still prevalent today, Gates explained.

“This is why the history of Reconstruction matters, ladies and gentlemen,” Gates said. “Because the problems that emerged during Reconstruction have never been solved.”

The event was co-sponsored by the Center for Studying Structures of Race and the Fowler Program. About 300 people, including members of the campus community and greater community, attended the event via Zoom. The lecture was the finale of a speaker series that coincides with Roanoke College’s recent partnership with Creative Time, an international nonprofit arts organization, to develop a comprehensive plan to honor and recognize the role of enslaved people in the history of the College and greater Southwest Virginia. The lecture series precedes planning for the College’s commission of a new memorial commemorating the enslaved people who built the College and contributed to the wider region.

“May we find inspiration and hope in the Reconstruction generation. May we also find courage even when the tide is rolling against us. With history as our guide, ladies and gentlemen, we will not be turned back. History, they say, often repeats itself. But it repeats itself only if we let it.”

Dr. Jesse Bucher, associate professor of history and director of the Center for Studying Structures of Race, moderated the question-and-answer segment of the event. Gates answered student questions about his research methods, the role that religion played in race-related policies, the role of Black women in civil rights endeavors, and more. Gates, who is the Alphonse Fletcher University Professor and Director of the Hutchins Center for African and African-American Research at Harvard University, was speaking from his home in Massachusetts.

Gates hosts “Finding Your Roots” on PBS — the season finale of which aired just after his talk Tuesday night — where he helps celebrities discover their family ancestry. He spoke about the late U.S. Rep. John Lewis and the comedian Chris Rock, both of whom were surprised to find that they were related to prominent figures. Lewis’s great-great-grandfather was among the first Black people to get the right to vote in Alabama. Rock’s great-great grandfather was elected to the South Carolina legislature.

Lewis and Rock were both shocked at these revelations, to find that their ancestors had such impressive accomplishments and opportunities. Gates said many people are surprised at how much freedom Black Americans had during Reconstruction, before the Jim Crow era restricted much of that freedom.

“May we find inspiration and hope in the Reconstruction generation,” Gates said. “May we also find courage even when the tide is rolling against us. With history as our guide, ladies and gentlemen, we will not be turned back. History, they say, often repeats itself. But it repeats itself only if we let it.”