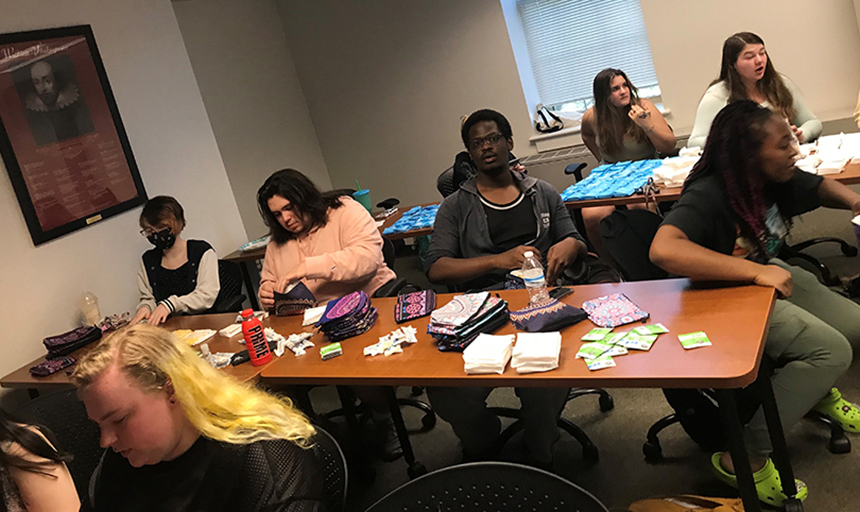 Both course curriculums include watching the Netflix documentary “Period. End of Sentence.,” which explores menstruation stigma in India. After watching the documentary, students in both classes discussed the financial struggle when accessing basic hygiene products both on a global and local level.

Organically, the conversations evolved into developing a cross-course project that would help ease the monetary burdens of menstruation for Roanoke-area citizens and promote menstruation equality.

With a total of 40 students contributing to the project, work quickly got underway on the design and execution. Students wrote emails to Virginia delegates to cut the tax of menstruation products, set up an information table at the Colket Center to survey students on their access to hygiene products, investigated the availability of menstruation products in bathrooms across campus, and asked fellow students to donate money to purchase menstrual supplies for those unable to afford them.

“Every student had a role in the project,” said Murawski. “It’s been completely student-run, which adds to how special this project is. Students have gone outside their comfort zones, faced a stigmatized topic, and raised awareness because they recognized the value in the difficulties some people who menstruate face.”

Eventually, through student initiative, partnerships with Roanoke County nonprofits helped focus the project’s mission to serving those most needy in the community. Partnering with Ursala’s Café — a non-profit organization that seeks to provide community space, quality food, and artistic programming for people in the Roanoke area regardless of economic means, led to raising money and purchasing products for community members who seek refuge at The Lampstand. The Lampstand is a residential program in Virginia dedicated to serving juvenile survivors of sexual exploitation and trafficking.

“It was an immersive learning experience that felt like more than just a means to attaining a grade, giving me a greater appreciation for the agency Roanoke gives its students.”

Between raising money from individual donors, virtually collecting donated materials through RightGift, an online platform that organizes, curates and promotes wish list campaigns; conducting a student meal-swipe campaign in March; and utilizing money from the Pathways Grant Program, a grant that supports student access to innovative learning opportunities, the project collected over $1,000 in donations.

In total, 150 bags of a week’s worth of menstruation supplies, hand sanitizer, tissues and flushable wipes will be donated to The Lampstand later this semester.

“Students have seen that taking action creates results,” said Larson-Harris. “It's so heartening to see Roanoke College students working for justice and helping others.”

For Gage Lapsley ’25, a Charleston, South Carolina, native, this project reaches far beyond Roanoke College and the surrounding community.

“This is something I can take home and fix in my city,” Lapsley said.

In addition, Sydney Young ’25, a communications major concentrating in gender and women’s studies, said that the stigma surrounding period poverty can silence people who truly need support and guidance.

“Having activism built into the academics is an amazing combination,” said Young. “It made something that can feel very academic feel real and tangible.”

Peter Simani ’25, an economics major, focused his efforts on designing and producing stickers and brochures to advertise the project on campus and in the greater community, noting that he was especially impressed with “how many creative avenues my classmates were ready to tackle the issue from.”

“There was a gratifying feeling of impact to the whole experience,” said Simani. “This project gave me the chance to make a change that was far more visible and realized than I've ever had the chance to do. It was an immersive learning experience that felt like more than just a means to attaining a grade, giving me a greater appreciation for the agency Roanoke gives its students.”

Currently, Murawski is writing a proposal to continue the project next year, focusing the donation efforts on supporting Roanoke College students specifically.

She has been most surprised at how willing students of all genders have been to learn more about period poverty, solidifying the importance of continuing the project in the future.

“The willingness of all students, men and women, in discussing a stigmatized topic with equal investment and involvement has been inspiring,” said Murawski.  “When you can destigmatize a topic and create a safe space for conversation, you’d be surprised who joins that conversation and creates change.”