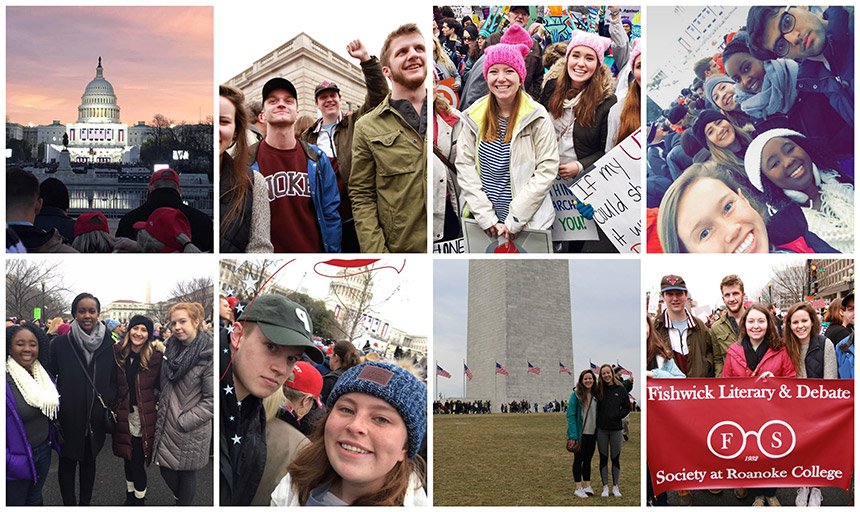 Roanoke College students were among the thousands of people who witnessed history in the nation's capital this past weekend.

Numerous students trekked to Washington, D.C., for the inauguration of Donald Trump, the 45th president of the United States, on Jan. 20 and the Women's March on Washington, a grassroots rally, on Jan. 21.

Friday began early for Marie Brown '17, who boarded the Washington Metro at the Rosslyn station in Arlington, Virginia, at 6 a.m. for the inauguration at the National Mall. This semester, Brown is interning at the Heritage Foundation, a conservative research think tank, as part of the Lutheran College Washington Semester Program.

She said the security was tight as she and several friends made their way into the inauguration area at 7 a.m. and took their places for the ceremony.

"It was truly a once in a lifetime experience," Brown said. "It was awesome to witness that many people who were passionate about an individual to come together to watch [Donald] Trump become the 45th president. It was interesting to watch the mood of the crowd change due to the different speakers during the ceremony."

“It was a blessing to witness two varying opinions about the state of the country and the direction it will move towards.”

The next day, other Roanoke students rallied with men, women and children at the Women's March on Washington, which aimed to raise awareness of women's rights. Similar sister marches were held in cities across the country.

"For me, this march was to show the world that we will never stop fighting," said Emily Townley '19. "Despite the overwhelming nature of the large crowd size, everyone was so nice to each other. Seeing all these people gathered together, in D.C. and across the world gave me so much hope."

Two other Roanoke students who are interning in Washington this semester through the Washington Semester Program attended both the inauguration and the Women's March.

"It was really interesting looking at everyone's point of view," said Diana Kamili '18, who is from Rwanda. "I remember me and my roommate having a conversation, and she stated 'This is what freedom looks like.' This statement has stuck with me ever since."

Kamili is an intern at the Children's Defense Fund, a child advocacy organization.

Tsedek Roberts '18, said the events "showed how divisive this country became after the election of Donald Trump."

"It was a blessing to witness two varying opinions about the state of the country and the direction it will move towards," said Roberts, who is interning at the U.S. State Department this semester.