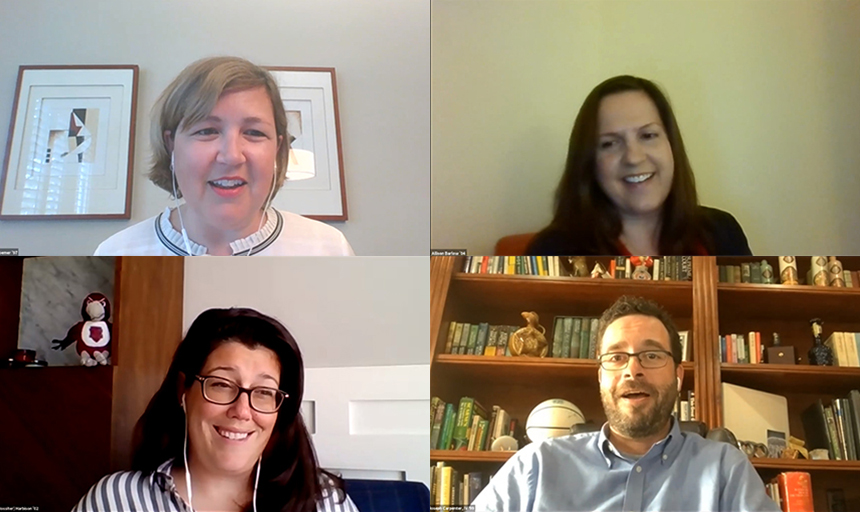 Anne Roemer ‘97 dreamed of a career that took her all over the world. She found that — and something more.

She now helps others get to space.

Roemer works as director of Human Resources and manager of Astronaut Selection at NASA’s Johnson Space Center in Houston. She helps select astronauts, but also gets to do a bit of traveling herself, from Russia to Kazakhstan to Dubai.

“There are opportunities to work internationally regardless of which career path you go down,” said Roemer, who graduated from Roanoke with a degree in international relations. “It’s been a thrilling and exciting ride for me and I’m blessed to work with great people.”

Roemer was one of four panelists who spoke to current students on April 15 in a Zoom discussion titled “Oh The Places You’ll Go: The Diverse Career Paths of IR Majors.” Dr. Joshua Rubongoya, professor of international relations, moderated the discussion and student attendees were able to submit questions.

Much of the conversation revolved around graduate school and how best to get a leg up as students pursue postgraduate degrees and enter the workforce. Joseph Carpenter IV ‘99, senior general counsel in what is now the Complex Litigation and Information Governance Section at Norfolk Southern Corporation, pointed out that many young people end up changing their career paths, so current students should focus on forming a short-term plan instead of looking way into the future.

“I think looking at where you’re going to be in 20 or 25 years is not a practical position to take,” Carpenter said. “You need to think about, ‘Where do I want to be in five years? What kind of a position am I looking for now?’ OK, let’s get there and then figure out what we’re going to do.’”

Along with Roemer and Carpenter, the panel included Allison Barlow ‘04 and Diana (Rossiter) Harbison ’02. Barlow currently works for Booz Allen Hamilton in Arlington, Virginia, as a management consultant supporting the U.S. Air Force. Harbison helps faculty and students at Purdue University in their pursuit of international development-focused research. Harbison previously worked for the U.S. Trade and Development Agency (USTDA).

Advice from the panelists, and hearing about the different paths they all took, resonated with those watching. Ashtyn Porter ‘23 is an international relations major who said it was interesting to hear from people who were in her shoes not too long ago.

“It was really useful to see where people have ended up who started out in a similar place to my own,” Porter said. “It was interesting to see the wide variety of careers the alumni ended up in, and helped broaden my scope for what fields I know I could end up working in.”

“It was really useful to see where people have ended up who started out in a similar place to my own. It was interesting to see the wide variety of careers the alumni ended up in, and helped broaden my scope for what fields I know I could end up working in.”

Advice ranged from big-picture ideas to how to best approach an interview. Harbison gave students specific examples of questions to ask as an interviewee, and Carpenter pointed out that current students might have a very unusual advantage in interviews now that many interviews are being held virtually.

“Students who have now learned virtually over the course of a year or two are probably going to be more comfortable in some ways with virtual interviews than the person interviewing them,” said Carpenter, who serves as president of the Roanoke College Alumni Association and chair of the Alumni Executive Council. “You have to understand that dynamic and be comfortable with it.”

Katherine Charbonneau ‘23, an international relations major, said she was grateful to take part in the event and learn from the alumni. She said she was surprised to see the panelists’ different career paths.

“There was a larger variety, even within the four panelists, than I expected,” Charbonneau said. “I found it also incredibly helpful that the panelists were also all former students. They gave really useful advice, such as what opportunities to keep an eye out for and how to present yourself in an interview.”