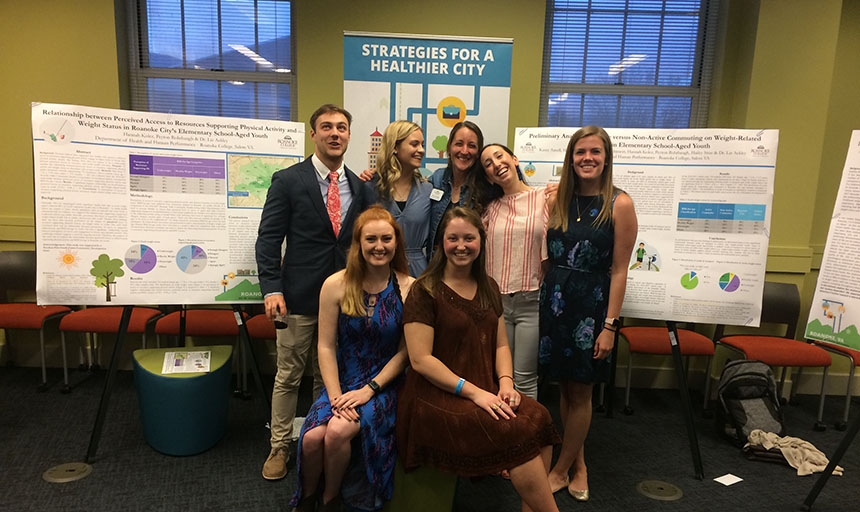 "You kind of had to take a step back pretty often because it did get really tedious and your eyes started to cross," says Emily Hutchinson '18. "When you took a step back, you remembered how important the data was."  The 10 Roanoke College students working as research assistants for Ackley logged data ranging from body mass indexes of local schoolchildren to whether or not those children perceived that healthy foods were readily available in their neighborhoods. The data is being compiled for The Roanoke Valley Community Healthy Living Index (RV-CHLI), a report that local health and government leaders frequently turn to when writing strategic plans and grant applications. "We're actually making change here in Roanoke because of the stuff [the students] are doing," says Ackley, the Brian H. Thornhill Associate Professor of Health and Human Performance. "It's so good for them to see every aspect of that."

Among the leaders who depend on the information in the RV-CHLI are members of Roanoke's Invest Health initiative team. In 2016, the City of Roanoke was selected from more than 170 communities nationwide that applied to be part of the prestigious Invest Health initiative, which is funded by the Reinvestment Fund and the Robert Wood Johnson Foundation. The initiative seeks to transform how leaders from midsized American cities work together to improve the health of people living in low-income communities.

Roanoke's team, which was awarded a $60,000 grant, received extensive training on how to get leaders from diverse organizations and agencies to work together, and how to get access to highly skilled faculty advisors and coaches who can help guide their efforts.

Roanoke College serves as the anchor institution for Roanoke's Invest Health team, with Ackley as its representative. Other members hail from city government, Freedom First Credit Union, the United Way of Roanoke Valley and the Local Environmental Agriculture Project (LEAP), a nonprofit organization. "We have a lot of really strong collaborative partners here in Roanoke," Ackley says.

During the Roanoke team's first year, members focused on gathering data about the barriers to health in low-income communities. In this phase, the members kept coming back to how schoolchildren from Northwest Roanoke, who filled out the surveys for the RV-CHLI with help from parents or guardians, were less likely than children from other parts of the city to agree that they had access to stores that sell healthy foods. "One of the things we've been looking at through this data set is identifying resident priorities," says Ackley. "We kept seeing healthy foods pop up year after year in our least affluent neighborhood quadrant that has the highest level of health disparity."

The U.S. Department of Agriculture considers Roanoke's Northwest corridor a food desert, meaning the area lacks full-service grocery stores and many families don't have transportation to help them reach stores that are farther away.

“We’re actually making change here in Roanoke because of the stuff [the students] are doing.”

"We have a population of people who are pretty much an island to themselves," Price says of the people living in the Northwest corridor. "We don't have the kind of grocery stores that can really give people access to healthy eating."

Once the team members set a goal, Roanoke College students got another opportunity to be involved in the Invest Health initiative. Ackley collaborated with Dr. Andreea Mihalache-O'Keef, associate professor of public affairs, to create a course during the 2017 Intensive Learning Term called "Food: Mapping Needs and Grassroots Action in our Community."

"We had her students do some mapping of existing grocery stores to identify where they were and the level of quality of food sources," Ackley explains.

The work of Roanoke's Invest Health's team hasn't gone unnoticed. On May 1, Ackley spoke at the seventh annual Convening on Healthy Food Access in Washington, D.C. "Even the attendees are invite only," Ackley says of the event. "It's a relatively small group, but they bring in the big policy people from across the world."

At the conference, Ackley talked about how the Invest Health team made it a priority to include Northwest Roanoke residents in brainstorming about how to address barriers to healthy living.

"It was neat to be showcased as a national model," Ackley says.

Throughout the course of their year as research assistants, Hutchinson says, Ackley always took the time to report new developments with the Roanoke Invest Health team. "It's really exciting to hear what happens with our data," says Hutchinson, who majored in health and exercise science at Roanoke College and who begins work toward her Doctor of Physical Therapy degree at Radford University this summer.

As research assistants, Hutchinson and Marissa Freeman had the opportunity to use the data they gathered for the RV-CHLI to conduct their own research. Hutchinson looked at how childhood obesity relates to life expectancy. Freeman-who majored in health and exercise science at Roanoke College and is waiting to hear whether she was accepted into an occupational therapy master's degree program-examined how students who perceived they had low access to healthy food were more likely to have high BMIs.

Hutchinson and Freeman entered their work in the Roanoke College Research and Creative Works Showcase, held in April. Each went home with a second-place prize.

"I was happy, mostly because more people found out about the research," Freeman says.