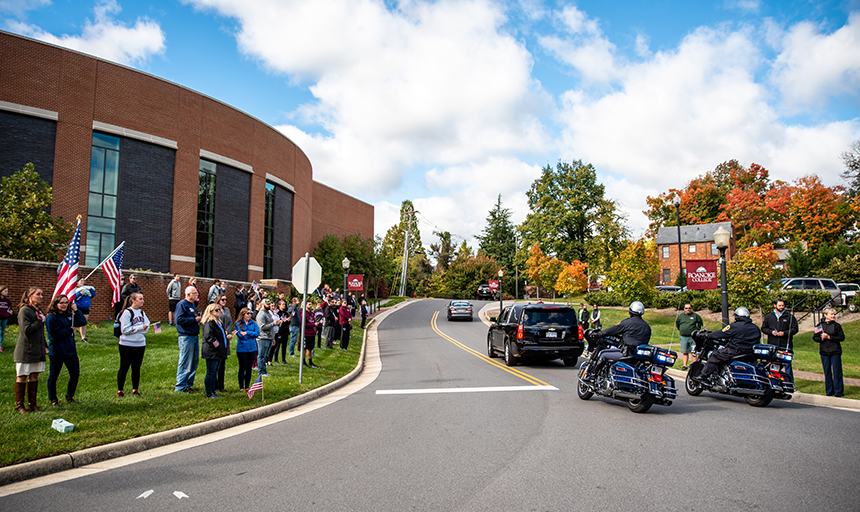 Dozens of American flags flapped in the brisk autumn breeze Tuesday afternoon on campus, as people came out in droves to pay tribute to Naval Air Crewman 2nd Class James P. Buriak ‘12. Buriak died Aug. 31 in the crash of an MH-60S U.S. Navy helicopter embarked aboard the aircraft carrier USS Abraham Lincoln. The helicopter crashed into the sea while conducting routine flight operations off the coast of San Diego.

Members of the campus community gathered at multiple spots on campus as a motorcade returned Buriak’s body to Salem. People gathered near the Cregger Center as the motorcade arrived on campus and others stood at the intersection of Market and Clay streets as the motorcade passed by. Virginia State Police led the motorcade, assisted by the Salem Fire Department, Roanoke College Campus Safety and Salem Police.

The Buriak family invites the campus community to a gathering to remember and honor Buriak. It will be held on Saturday, Oct. 30 at 1 p.m. at Olin Hall Courtyard with a time of remembrance and thanksgiving at 1:30 p.m. with drinks and small bites provided until 4 p.m.

Buriak was a 2012 graduate of Roanoke College and the son of Jim Buriak, who retired earlier this year as athletic trainer and associate professor of health and human performance. AWS Buriak, a graduate of Salem High School who majored in sports management at Roanoke, was 31.

Buriak is survived by his wife, Megan, and young son, Caulder, as well as his parents, Jim and Carol Buriak, and his sister, Laura, and brother-in-law, Erik Zickefoose. A fundraiser has been created to support his wife and son during this tragic loss.