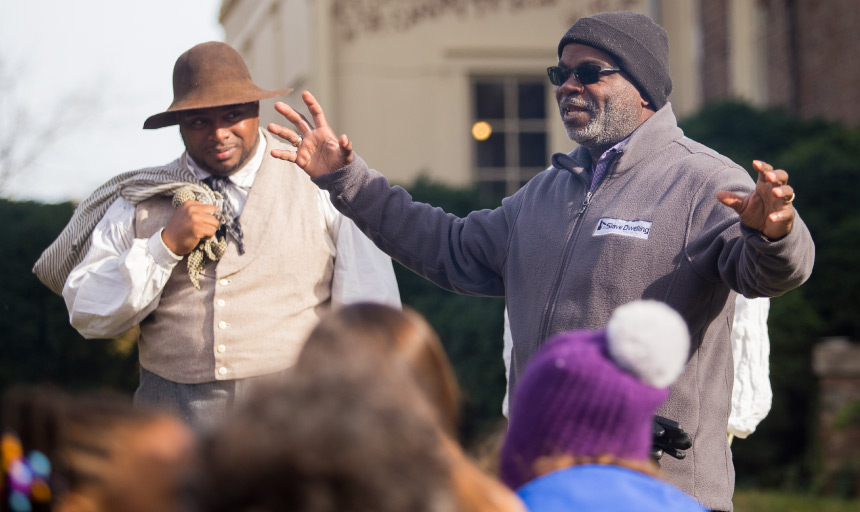 Joseph McGill is in the business of pointing out uncomfortable truths.

Since 2010, McGill has traveled to storied institutions and plantations around the country to shed light on forgotten people and their stories-the enslaved people who built these places, places like Monticello, the University of Virginia and Clemson University.

During a three day visit to the Roanoke College campus in November 2017, McGill explored the past of Monterey House. He visited with community members, students, staff and professors to embrace, discuss and learn from these uncomfortable truths on our own campus.

Monterey was built in 1853 for Salem business leader  Powell H. Huff. But an untold story lies behind the two-story brick home.

The Monterey property included slave quarters, a four-room structure located behind the main house. According to probate court records from 1862, Ned, Sarah, John, Mahaly, Ellen, Josephine, Judy, Mary, Martha, Taylor, Morris, Tucker, Jim and Lewis are the names of some of the enslaved people who lived in that four-room structure. 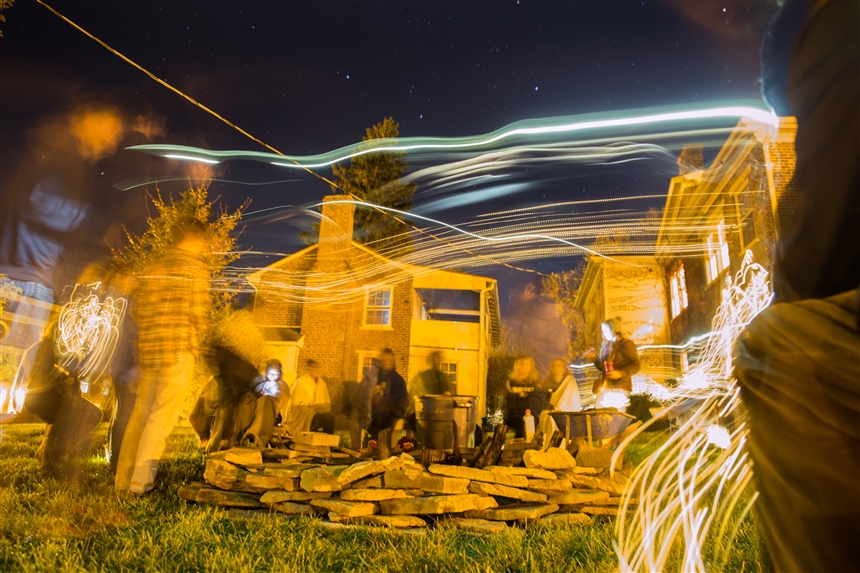 The College is striving to provide agency for those who served Monterey, and bringing McGill to campus was a major step forward in these efforts; preservation efforts that aim to best tell the stories of the enslaved while utilizing the space as an historical learning experience.

During his stay, McGill engaged many in the College community in discussion across campus and around a campfire outside of the slave quarters at Monterey. A Black Lives Matter forum was held, where McGill joined two history faculty members, Dr. Gregory Rosenthal and Dr. Jesse Bucher, to address pressing issues facing our country.

On his first night in Salem, following the campfire discussion with a number of students, McGill slept in the slave quarters. He says when he awoke the following morning, he noticed a group of the students never made it inside the quarters to sleep, choosing instead to continue their discussion outside through the night.

This dialogue between students and a preservation expert allowed for a better understanding of the mission and purpose of the developing project. The setting was intimate, with introductions made by everyone in attendance. The atmosphere allowed for open and real discourse about current race relations in the United States and abroad.

"I am incredibly grateful for the opportunity to listen to Joseph McGill," says senior Colin Wall. "His presentation not only was informative, but allowed me to think critically about the past, present and how we should go forward in the future as a nation."

While McGill engaged many members of the College and surrounding communities in conversation about how to properly memorialize one structure on campus, his insight was valuable in learning how to redefine another.

McGill's visit also included a meeting with a College task force that was created to examine how a Confederate soldier memorial on the corner of Main Street and College Avenue could be used to advance the College's educational mission. The memorial is situated on the edge of campus but is owned by Roanoke County.

McGill's experience with the Slave Dwelling Project, and its goal to preserve an uncomfortable part of American history, was sought to help the task force determine how it might address College use of the memorial.

"A lot of organizations are not even close to where Roanoke College is," McGill said, referring to creation of the task force. "The willingness is there. You're further along than you think."

Emma Sliwinski '18 contributed to this article.