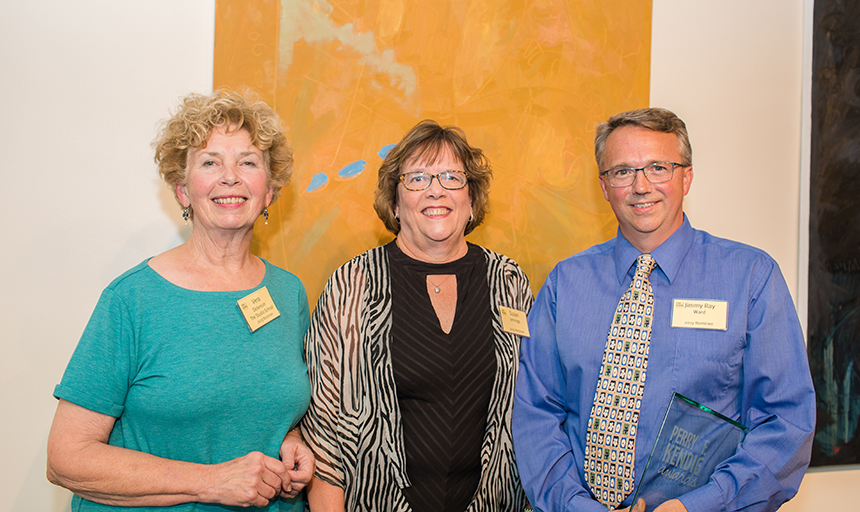 Vera Dickerson, of The Studio School, Susan Jennings and Jimmy Ray Ward at the 2019 Kendig Awards.

Susan Jennings, Jimmy Ray Ward, and The Studio School have been honored with this year’s Perry F. Kendig Arts and Culture Awards.

Co-sponsored by Hollins University and Roanoke College, the Kendig Awards program recognizes exemplary individuals, businesses, and organizations in Virginia’s Blue Ridge Region (counties of Roanoke, Botetourt, and Franklin, the cities of Roanoke and Salem, and the town of Vinton) that support excellence in the arts.

Jennings recently retired as the Arts and Culture Coordinator for the City of Roanoke and formerly was executive director of The Arts Council of the Blue Ridge. She continues to be an influential member on many advisory boards for the arts and a driving force behind the creation of initiatives such as Art for Everyone, Parks and Arts, and the Elmwood Park Restoration Project and Sculpture Garden. She played an instrumental part in the rebirth of downtown Roanoke through Center in the Square and the Taubman Museum of Art.

Ward has designed sets and exhibits for roughly 160 productions in 15 locations, and also teaches Radford University students to discover their unique talents. He is respected in the artistic community for his devotion to his craft; he is considered an exemplary collaborator and problem-solver, and has been brought back time and again by many organizations. From historical to whimsical, he has the impressive ability to convince an audience and is considered an “unsung MVP” for theatrical productions.

For 28 years, The Studio School has been a pioneer in arts education for the community.  It offers art classes in all media to students from beginners to professionals. Teachers are recognized artists both locally and nationally, and their skills draw students far and wide to attend individual and/or group classes. The Studio School also provides affordable opportunities to study abroad and to experience intensive sessions with visiting artists.

Named for the late Perry F. Kendig, who served as president of Roanoke College and was an avid supporter and patron of the arts, the Kendig Awards program was established in 1985 and presented annually by the Arts Council of the Blue Ridge through 2012. Hollins and Roanoke College first partnered the following year to bestow the honors. Congratulations to the 2019 winners!