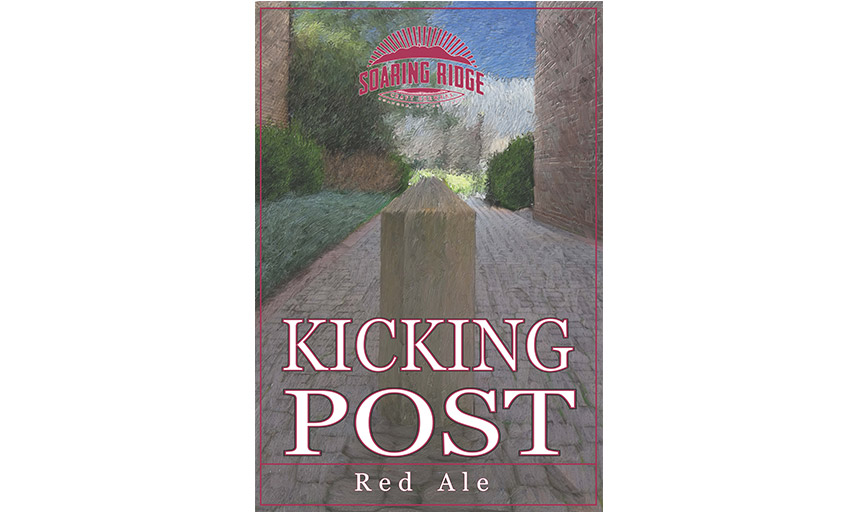 In the spring of 2016, as plans to celebrate Roanoke College's 175th anniversary were taking shape, a group of alumni, over dinner, brainstormed how the College could uniquely mark the major milestone.

An idea emerged. How about an RC-themed craft brew that would debut during Alumni Weekend 2017, Kevin Hartz '92, proposed? Hartz is vice president of Roanoke's Alumni Association.

The idea was shelved for a short time until an RC friend of Hartz remembered that another Roanoke alumnus, Nathan Hungate '98, was part owner of Soaring Ridge Craft Brewers, the first craft brewery in downtown Roanoke. Hartz's initial idea appeared to have real potential, even more so once Soaring Ridge's brewmaster and marketing director got involved.

Soon, with endorsement from the alumni committee of Roanoke's 175th Anniversary Planning Team, and the collective work of the Soaring Ridge brewmaster and a committee of alumni and staff members, a beer type was selected — Irish Red Ale.

But what to call this ale with a smooth, balanced flavor and maroon-like color?

Alumni and staff members submitted a variety of possible names. A survey produced 12 finalists. The winning name, which polled at more than 80 percent, was Kicking Post — perfect, as it highlighted a distinct part of Roanoke's campus and its traditions.

With its name selected, the beer needed a logo. In stepped the College's Fine Arts Department.

The result — an image that focuses the eye on the kicking post while showing off the beauty of the Front Quad.

The beer was unveiled during Alumni Weekend 2017, April 7-9. The Board of Trustees enjoyed the first glasses on April 6, with various reunion groups getting a first taste on April 7 and 8.

Since then, more members of the RC family have had a chance to enjoy Kicking Post. Thanks to Soaring Ridge's management and marketing team, several restaurants in the Roanoke Valley have had the beer on tap. More than 220 gallons have flowed so far.

Look for the Kicking Post to make future appearances, including on Aug. 24 for a RC alumni chapter gathering at Soaring Ridge.