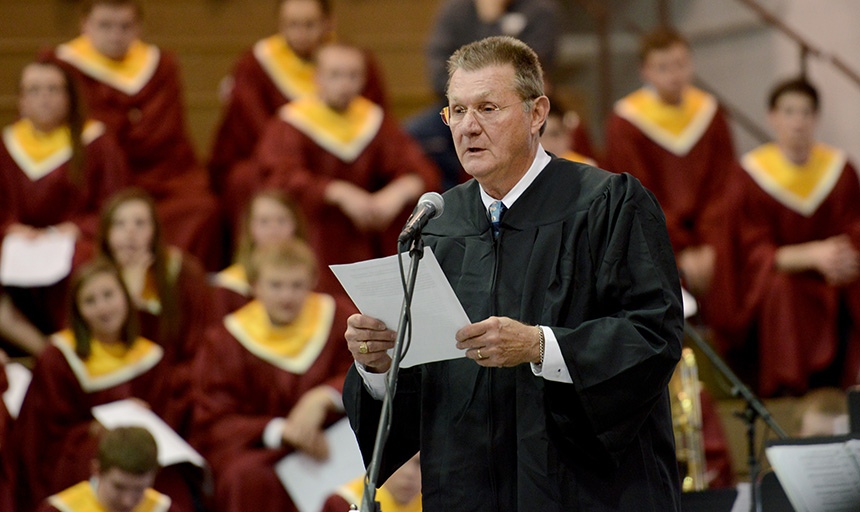 After 50 years, a dream fulfilled

Larry Forrester graduated from Roanoke College on May 2 with a Bachelor of Arts in creative writing. His graduation from Roanoke came 50 years after his high school graduation.

At Roanoke's Baccalaureate ceremony, the Rev. Chris Bowen, dean of the chapel, invited Forrester to read a letter he'd written earlier this year reflecting on his graduation. His letter brought tears to many of those in attendance at Baccalaureate. When he walked across the stage at Commencement, the crowd erupted and gave him a standing ovation. In all the excitement, it appeared Forrester didn't notice the ovation until he reach President Michael Maxey, who stopped him and turned him toward the audience to see his classmates and their families.

Of course, his letter tells his story best. It is presented here in his own words. Thanks to Forrester, we know dreams can come true. Congratulations on your graduation!

“Believe in God, yourself and, yes, hold on to your dreams.” 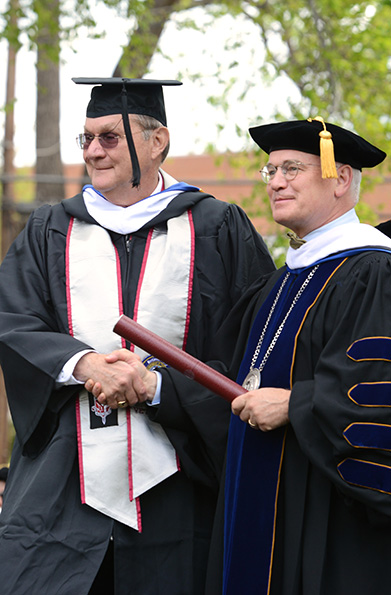 2015 is an exciting year for me. It marks 50 years since I graduated from Staunton River High School in Moneta, Va. This year, another graduation for me is about to take place here at Roanoke College. It is the culmination of a dream to graduate from Roanoke - five decades after a class visit in the spring of 1963. After touring the campus that year, I was hooked. I always liked the quiet and peacefulness of small gatherings and surroundings; the Roanoke College campus was perfect.

That night, when I returned home, my parents asked if I enjoyed my visit to the college, to which I answered "Yes." I talked with them and let it be known that Roanoke was where I wanted to attend after graduation from high school. I was not totally shocked but greatly deflated by their response. I was advised that they were struggling just to get me through high school even with me contributing from my part-time job. College had not been an option for them and they made it clear that it wasn't an option for me either. As I remember, it appeared to bother my father, but my mom was adamant that I should forget the idea and concentrate on finding a full-time job when I graduated.

I knew things were hard for mom and dad. Mom had a lot of sickness and my dad had just been diagnosed with leukemia. I put the idea on the back burner and made it a lifelong dream to graduate from Roanoke College. As time passed, when I came to Roanoke I would drive by the campus just to look and dream. I kept saying "One day. One day."

I graduated from Staunton River High School on June 7, 1965. After graduation I got a full-time job at my father's place of employment delivering furniture. In January 1966 I entered active duty in the U.S. Navy. I had joined the Naval Reserve in Roanoke in November 1963 and attended meetings once a week until I went on active duty. I served my time and returned home to work for several different employers. I worked in a parts house, in law enforcement, and in financial services. My wife and I married in 1974. I had continued in the reserves, and in 1988 was recalled to active duty and assigned to Naval & Marine Corps Reserve Center in Roanoke as a recruiter.

On Oct. 1, 2001, I was in a major car accident while recruiting and sustained multiple injuries. I have never recovered from several of those injuries. I was able to continue serving in the Navy by being assigned to light desk duty, but after retiring, I was not able to return to work. I requested through the Veterans Administration Vocational Rehabilitation Program to retrain for a new vocation.

I began studying at Virginia Western Community College in 2008 and received an associate's degree in General Studies. In the fall of 2011, I started classes at Roanoke College. In a little over a month I will graduate with a major in creative writing and minor in literary studies. Fifty years after my high school graduation, I will realize my longtime dream when I receive my diploma from Roanoke College.

I once heard someone say: "Don't let anyone steal your dream." I say: "Believe in God, yourself and, yes, hold on to your dreams."

Maroon text, if needed. If not, delete it.