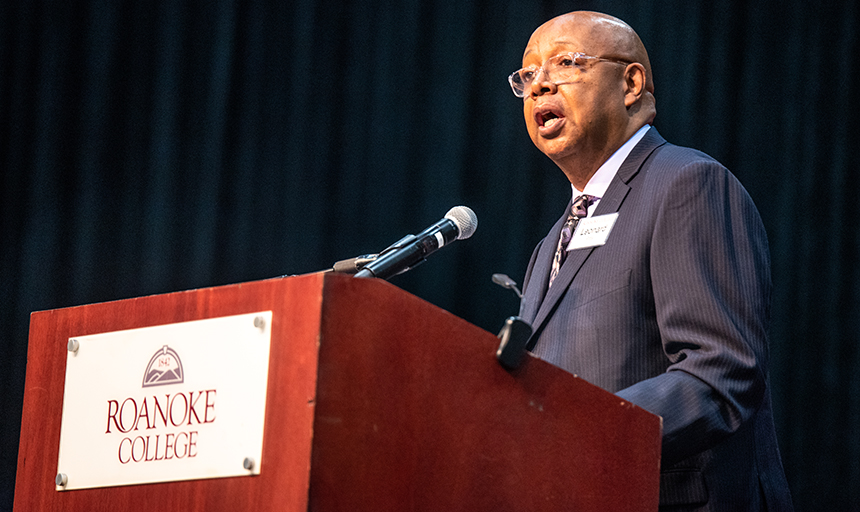 Author and columnist Leonard Pitts Jr. brought his no-nonsense, straight-no-chaser brand of commentary to Roanoke College on Nov. 2, delivering a message of urgency about a “crisis of misinformation.”

“You are the first living, breathing human beings that I have appeared before in 18 to 20 months,” Pitts said to an audience assembled in the Bast Center and viewing virtually on Zoom. “I am happier than a little child on Christmas morning to not be sitting in the chair in my office on my iPad.”

With that, Pitts proceeded to illustrate how our gravest crisis now perhaps is not COVID-19, racial reckoning, climate change or political polarization — the “pulling apart along seams of red and blue, left and right. I am here to tell you there is a graver crisis, a crisis that feeds all of those, a crisis almost no one talks about. I call it the misinformation crisis,” he said.

Misinformation, Pitts explained, is where “knowable and verifiable fact is denied out of ignorance or intent. And if we don’t take it seriously, it might be the death of us.”

Pitts, who received the Pulitzer Prize for Commentary in 2004, outlined four social and political developments converging to create a “perfect storm” that has given rise to a crisis of misinformation: ambient distrust of authority; the internet and social media; journalistic cowardice; and the miseducation of the American student.

“How about if we just let educators educate?” Pitts asked. “Here’s an idea: Let them teach students how to think, not what to think but how to gather and evaluate information. When distrust is ambient in the very air we breathe…the last line of defense is your own mind, to be able to sift through information [and] decide what is valid and what is not.”

“Because you dearly believe a thing doesn’t make it true. Recognize that and think again. Think again. Literally, it is a talent and skill we have allowed to decay to shameful levels in this country. If you think America can go on like this indefinitely, think again.”

“We can never have discussion about what I’m doing or what I’m not doing if we have no facts in common, no language in common. We can’t debate or resolve problems,” he said. “That is the cliff we are careening toward now. The good news is, we can turn away from the cliff.”

How, Pitts asked? Recognize a crisis as a crisis, he said. Question your questioning of authority. Verify your information sources. Question the thing you think you know you are right about. On those who spread lies, exact a price for those lies. Understand that Facebook, Twitter and Instagram are not news sources. Let teachers teach. Demand courageous journalism. Support the fact-checkers, such as Snopes.com and FactCheck.org.

And lastly, “Hold yourself to account.,” Pitts advised the audience. “Because you dearly believe a thing doesn’t make it true. Recognize that and think again. Think again. Literally, it is a talent and skill we have allowed to decay to shameful levels in this country. If you think America can go on like this indefinitely, think again.”

The Fowler Public Affairs Lecture Series — established by former U.S. Secretary of the Treasury Henry H. Fowler ’29 — serves as an open forum on public affairs. In addition to classroom sessions with Roanoke College students, guest lecturers give public addresses, free of charge, to the community.

“Henry Fowler was someone who never forgot where he came from,” Roanoke College President Michael C. Maxey said in opening remarks. “He wanted to acquaint the larger region with observers of the continuing American experiment, to help us understand the world and events.”