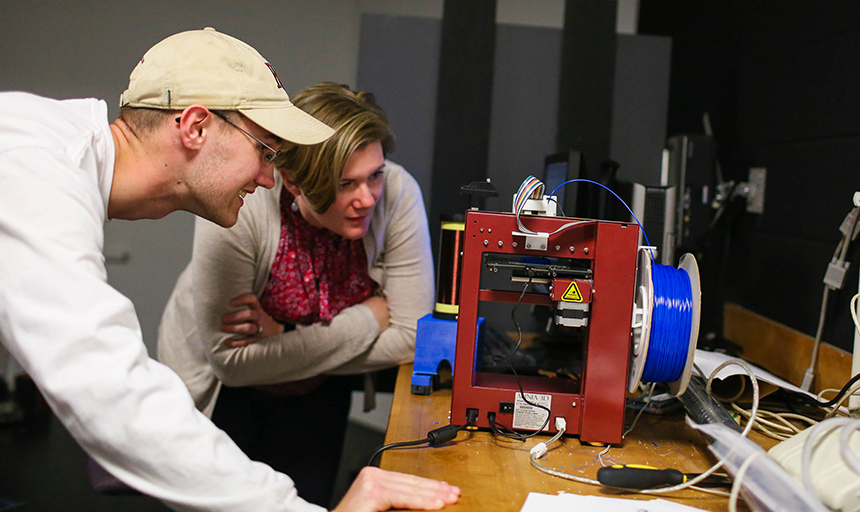 William "Liam" Lambert has been awarded a prestigious Goldwater Scholarship. Lambert is a junior from Staunton who is a double major in physics and math. The Goldwater Scholars were selected based on academic merit from a field of 1,280 natural sciences, mathematics, and engineering students nominated by the campus representatives from over 2,000 colleges and universities nationwide. As a physics major, Lambert also received a membership to American Physical Society and the organization featured him and his research on their website.

"Liam Lambert started working in my lab since his freshmen year," Dr. Rama Balasubramanian, associate professor of physics. She is both Lambert's advisor and research mentor. "Liam has studied the crystallographic and magnetic properties of the nanocatalysts that are useful in the synthesis of carbon nanotubes. As an aspiring engineer, he also designed and built a magnetometer to map the magnetic hysteresis of nanocatalysts synthesized in the lab. I am happy to have mentored Liam the past several semesters, and I am very pleased that his academic abilities, dedication to research and his creative approaches to solving problems, have won him the Goldwater Award in physics."

Lambert is the fourth Roanoke student to earn the Goldwater Scholarship. Jeremy Johnson '13 was the most recent Goldwater. Johnson is pursuing both a medical degree and a Ph.D. at the University of Kentucky. Dr. Jake Bennett '08, also a physics and math major, was the last physics student to win the Goldwater award. He is a physics professor at the University of Mississippi and is the project coordinator for the elementary particle physics experiment BESI in China.

“Liam has studied the crystallographic and magnetic properties of the nanocatalysts that are useful in the synthesis of carbon nanotubes. As an aspiring engineer, he also designed and built a magnetometer to map the magnetic hysteresis of nanocatalysts synthesized in the lab. ”

"Liam's heightened curiosity pushes beyond normal intellectual boundaries," Dr. Matt Fleenor, associate professor of physics, said. "From both academic and personal development perspectives, Liam exhibits curiosity by responding to personal risk in a creative rather than fearful manner.  From the perspective of a career researcher in the sciences, perhaps there is no greater quality than curiosity leading to creativity and bolstering the intellectual fortitude to model, experiment, and analyze." 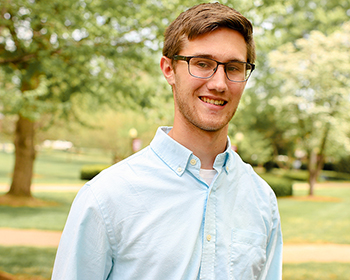 "It is a great honor to be named among the top researching undergraduate students in the country," said Lambert. "It has been awesome to think that my work stood out in the midst of students from large research universities and Ivy League schools. This experience will be a great conversation piece for future graduate school interviews and I am excited to see how it will benefit Roanoke College. I believe that my work within the researching community is far from over."

"What stands out to me about Liam is his initiative," said Dr. Karin Saoub, associate professor of mathematics. "Our research on optimizing 3D printing is entirely due to his observations of inefficient printing paths and his desire to find a better solution. Liam has a breadth of mathematics knowledge to not only discern which area of mathematics would best fit the problem, but also the initiative to read through the literature and formulate a research plan."

This year, 211 Goldwater Scholarships were awarded to sophomores and juniors across the U.S. with another 281 nominees named as Honorable Mentions and virtually all intend to obtain a Ph.D. as their highest degree objective. Lambert was an Honorable Mention in the Goldwater competition last year, along with Caroline Peterson in chemistry.

The Goldwater Foundation is a federally endowed agency. The Scholarship Program honoring Senator Barry Goldwater was designed to foster and encourage outstanding students to pursue careers in the fields of mathematics, the natural sciences, and engineering. The Goldwater Scholarship is the preeminent undergraduate award of its type in these fields.