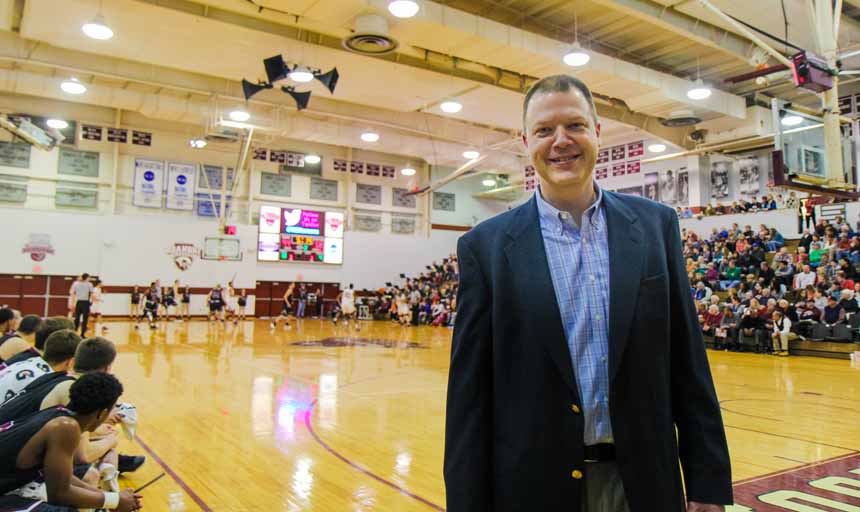 Jon Maher at the Last Bast Finale on campus in February.

As a standout basketball player at Blacksburg High School in Virginia, Jonathan Maher '97 was recruited to play ball at numerous colleges around the country.

Maher decided on Johns Hopkins University in Baltimore, Md. A fan of math and science, he was drawn to chemical engineering but left Hopkins after two years.

"I was sitting in a lab somewhere, and realized I was headed for a job staring at a computer screen or monitoring gauges at a chemical factory," Maher says. "I wanted to have more interaction with people for my career. That got me thinking about going into medicine, specifically orthopaedic surgery, which would allow me to stay involved with sports."

Maher has made orthopaedics his life's work, from his years as a military surgeon to a high-profile stint as a team doctor for the NBA's Boston Celtics. In 2015, Maher returned to Southwest Virginia, joining Carilion Clinic as an orthopaedic surgeon specializing in sports medicine.

Roanoke roots
Coming out of high school, Maher had already narrowed his choices to Roanoke College and Johns Hopkins. When he thought of transferring schools, Roanoke was the first to come to mind.

The decision to transfer to Roanoke was a good one, Maher says. He played basketball at the College his junior and senior years, making the Academic All-America district first team and serving as the varsity team captain in 1996 and 1997. He led the team to consecutive NCAA tournaments, including a trip to the Sweet 16. Moreover, he got to know the College faculty, had the opportunity to do research as an undergraduate and attended classes with a student-teacher ratio that better suited him.

"My [Johns Hopkins] freshman year's chemistry class had over 700 people in it, versus Roanoke College, where my chemistry class had about 18 students," Maher says.  He did research under Dr. Darwin Jorgensen, Brian H. Thornhill Professor of Biology, and took from that, lessons in the scientific method, how to construct a research project and how to write proposals and evaluate research.

"I handed Jon a very difficult project and he pushed forward on it independently, figuring things out as he went," Jorgensen says. "He finished a really fine project in the end that not many students I've had work for me could have done. When Jon left Roanoke for medical school, I knew he would figure out what to do and would move forward on making a professional life for himself with the kind of independence he had shown me while he was at Roanoke.

"He certainly has done that. Nothing he has done since Roanoke surprises me. In fact, I expected nothing less."

Maher says Roanoke College provided a great foundation, not just through participation in research, but through relationships he developed with faculty and peer students. "My best connection was undoubtedly meeting my wife Jill Catanese Maher '97. She has provided inspiration and support for me since the day we met on campus," he says.

“My experience at Roanoke College provided an invaluable foundation for my career as an orthopaedic surgeon. I learned to think critically and scientifically, fostering the values and ethics that ultimately shaped my world view.”

With the rigors of playing basketball in college, Maher didn't have additional time to volunteer in other medical clinics. He realized that he would need to gain more clinical experience and likely go to graduate school to improve his chances of gaining admission to medical school.

Maher had taken several business classes at Roanoke College, which prepared him for the GMATs and applying to business schools. After graduating from Roanoke in 1997, Maher attended Virginia Tech, earning a master's degree in accounting and information systems. In the fall of 1999, he entered Jefferson Medical College in Philadelphia on a Navy scholarship, effectively beginning his military service. He was commissioned into the Reserves at the recruiting district in Richmond, Va., and was re-commissioned to full-time active duty in June 2004 when he graduated from medical school. 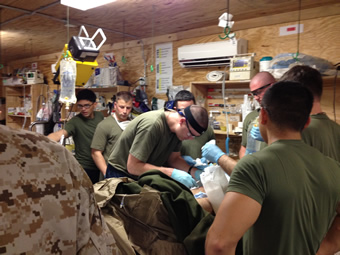 Maher did his surgical internship training at Naval Medical Center Portsmouth (Va.), then was sent out into the fleet as a battalion surgeon with the Marines in Okinawa. "I was able to take care of patients independently for a year before returning to my residency training," Maher says.

After finishing his residency at the Naval Medical Center Portsmouth in 2010, he served as an orthopaedic surgeon at Naval Hospital Camp Lejeune (N.C.) for four years. During that time, he deployed to Afghanistan in support of Operation Enduring Freedom and served at the combat outpost Shukvani, in the Helmand province of Afghanistan, as part of a surgical team. His honors for service to country include several Navy Commendation medals, Navy Achievement medals, and the Military Outstanding Volunteer Service Award for meritorious service in Afghanistan and his time at Camp Lejeune.

“Sitting on the bench with the Celtics was certainly a dream come true. I am very fortunate to have had the opportunity to work with and take care of so many great people.”

A taste of the NBA
In 2014, after a 14-year career in the Navy, Maher completed additional fellowship training in sports medicine and arthroscopy at New England Baptist Hospital in Boston, Mass. New England Baptist happens to be the official hospital of the Boston Celtics, and Maher served as one of the Celtics' team doctors, as well as a team doctor for Harvard University Athletics.

"Growing up and playing ball, I always dreamed of making it to the NBA," says Maher, who is over 6'6" tall. "Being a former hoops player gave me instant legitimacy with the players because I could relate to the rigors of competition that they faced every day."

Maher says his time in Boston was a tremendous experience personally and professionally.

"Sitting on the bench with the Celtics was certainly a dream come true," he says. "I am very fortunate to have had the opportunity to work with and take care of so many great people."

That continues for Maher since moving home to Blacksburg last fall with his wife and their three children. He is an attending surgeon in Orthopaedic Surgery and Sports Medicine at Carilion Clinic's Institute for Orthopaedics and Neuroscience in the New River Valley and in Roanoke. He is board certified in orthopaedic surgery, an instructor in advanced trauma life support, an assistant professor in orthopaedics at Virginia Tech Carilion School of Medicine and an assistant professor of surgery at the Virginia College of Osteopathic Medicine.

Maher continues his involvement in research, writing book chapters and participating in clinical trials on anterior cruciate ligament (ACL) reconstructions. He remains intimately involved in sports, serving as a team doctor for several high school and college teams in the New River Valley and coaching his son in basketball on local recreational and AAU teams.

Maher is certain that coming to Roanoke College was one of the best decisions he has ever made.

"My experience at Roanoke College provided an invaluable foundation for my career as an orthopaedic surgeon," he says. "I learned to think critically and scientifically, fostering the values and ethics that ultimately shaped my world view.

"I have been around the globe and I cannot think of a better place to pursue an undergraduate education."