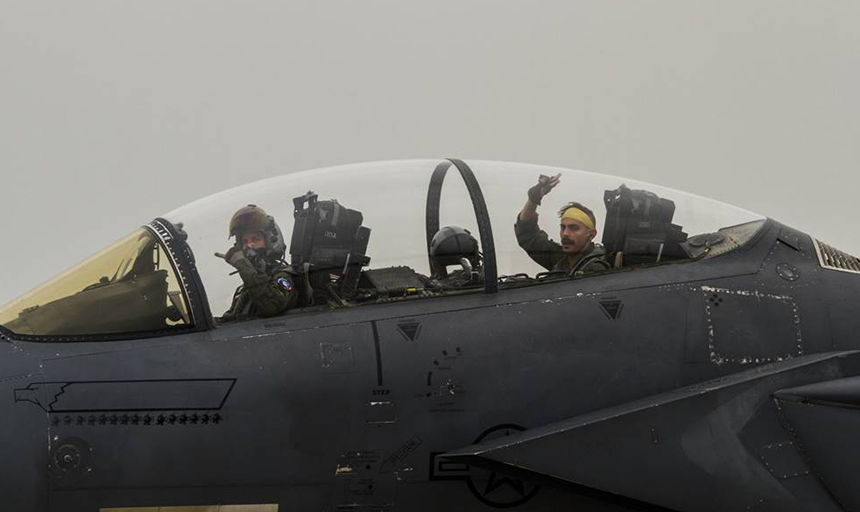 Michael McCloskey ‘10 was supposed to be home by now. McCloskey, a weapons system officer in the United States Air Force, was deployed late last year for what was supposed to be a six-week assignment. That six weeks has turned into six months, due to Russia’s recent invasion of Ukraine.

As tensions were rising earlier this year, Air Force commanders thought it wise to keep some extra forces in Europe, McCloskey said. Along with its allies in the North Atlantic Treaty Organization (NATO), United States military members are in Europe “just in case” things get worse, McCloskey said.

“You've got the British, the Italians, the Romanians, the Polish, they're all here doing the same thing, basically just protecting those borders, should it get to the point where we need to act,” McCloskey said. “But obviously, the main goal is to not get involved. We don't want to poke the bear, so to speak, and they don't want to mess with us. And I think we have that mutual agreement between two powers.”

As a weapons system officer, McCloskey explains, he has essentially the same duties as Goose in the movie “Top Gun.” He runs the radar, drops bombs and performs other coordination tasks on board an F-15E fighter jet.

He also serves as a flight commander, where he checks in on others in his squadron and makes sure they’re taken care of on a personal level. He compared the job to that of an academic advisor who helps a large number of people at one time, and said the skills he uses now go back to his time at Roanoke College.

“The response and relationships, that's all from my professors at Roanoke and how they treated us in a small group environment in the classroom,” McCloskey said. “It definitely translated over to how I interact with the people who I have.”

“The response and relationships, that's all from my professors at Roanoke and how they treated us in a small group environment in the classroom. It definitely translated over to how I interact with the people who I have.”

McCloskey, whose wife Danielle also graduated from Roanoke in 2010, always had a fascination with aviation. In his hometown of Waynesboro, Virginia, he and his father used to watch planes land and take off at the local airstrip. He also had an interest in history — one so intense that he knew three days into his freshman year that he wanted to be a history major.

He ended up forming a tight bond with history faculty, and that bond continues to this day. He’s particularly close with Dr. Rob Willingham, associate professor of history and chair of the history department. When McCloskey was working on his master's degree in military history from the American Military University, he often spoke with Willingham.

Now, the two are still regularly in touch. When Willingham helped lead a teach-in on campus about the conflict in Ukraine, he specifically mentioned McCloskey and made it clear that the Roanoke community was thinking of him. McCloskey, who was watching the live stream from afar, said he greatly appreciated the shout-out. After the teach-in, McCloskey got messages from other friends he’d made at Roanoke, including Pi Kappa Phi fraternity brothers.

His tight relationship with Willingham and the rest of the history department at Roanoke is partially why he hopes to transition to a different career path in the coming years.

“I've realized that I love flying, but history is my passion,” McCloskey said. “So my goal after my next assignment is to go work and be a history professor at the Air Force Academy. A lot of that just stems from the relationships I was able to form with my professors at school, and I sort of took what they instilled in me and sort of ran with it.”

Lessons he and Danielle learned at Roanoke have gone beyond their professional lives, he said.

“The school has done a whole lot, both for me and my wife,” McCloskey said. “We might not specifically see it, or recognize it, but I think a lot of the way that we carry ourselves and the things that we teach our kids were sort of values that we picked up at school.” 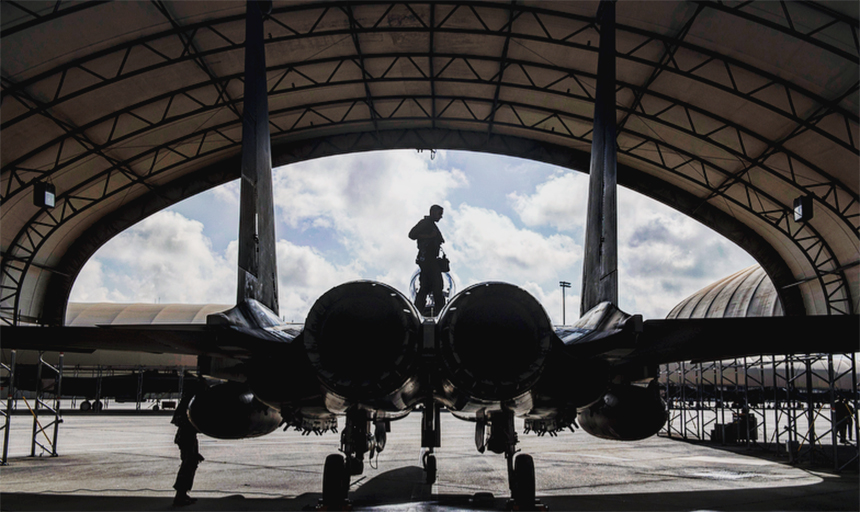 Michael McCloskey '10 atop a jet prior to a flight. 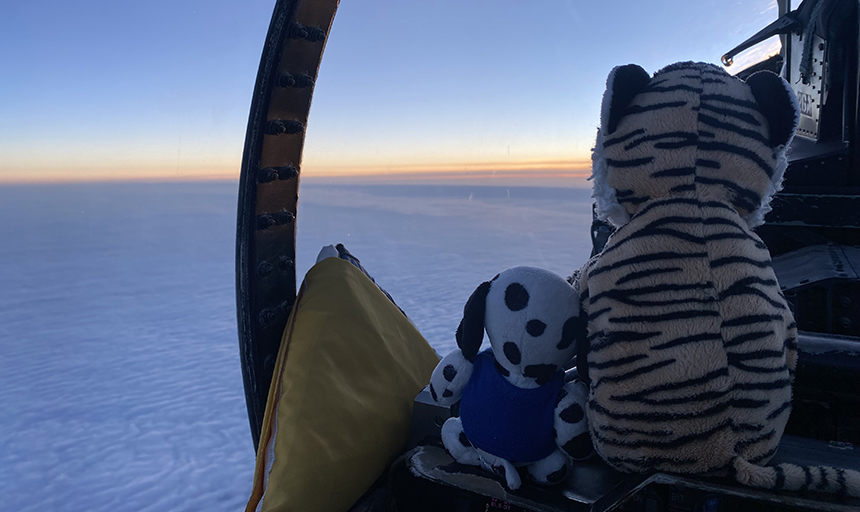 Two stuffed animals given to Michael McCloskey '10 by his children take in the view from the cockpit of a jet in flight.

Michael McCloskey '10 waves from the back seat after a flight. 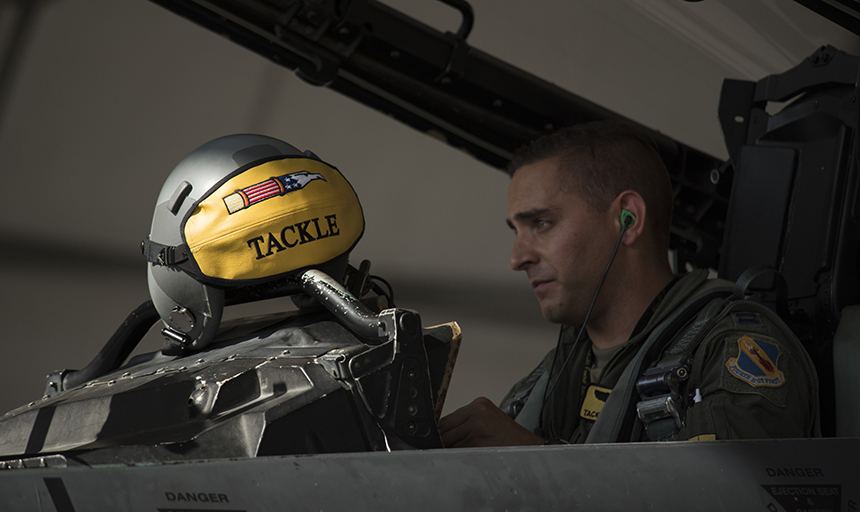 Michael McCloskey '10 sits in the cockpit of a jet prior to takeoff. 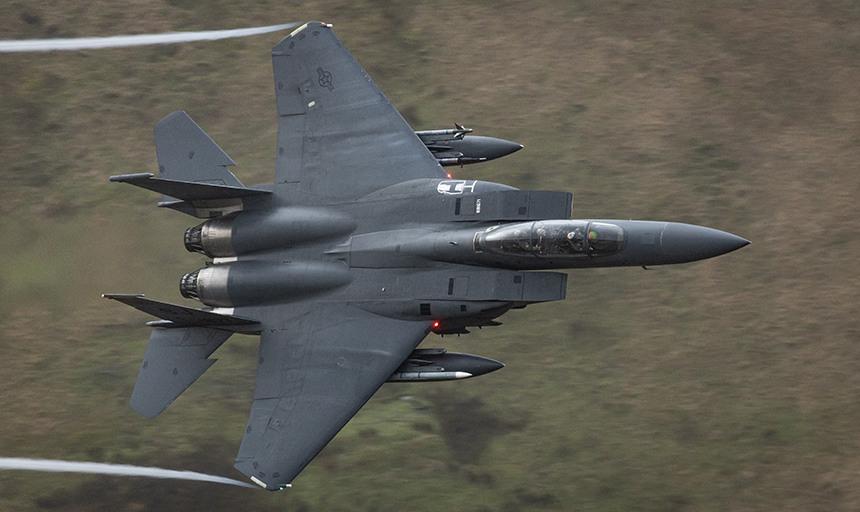 A fighter jet flies in the Mach Loop in Wales. 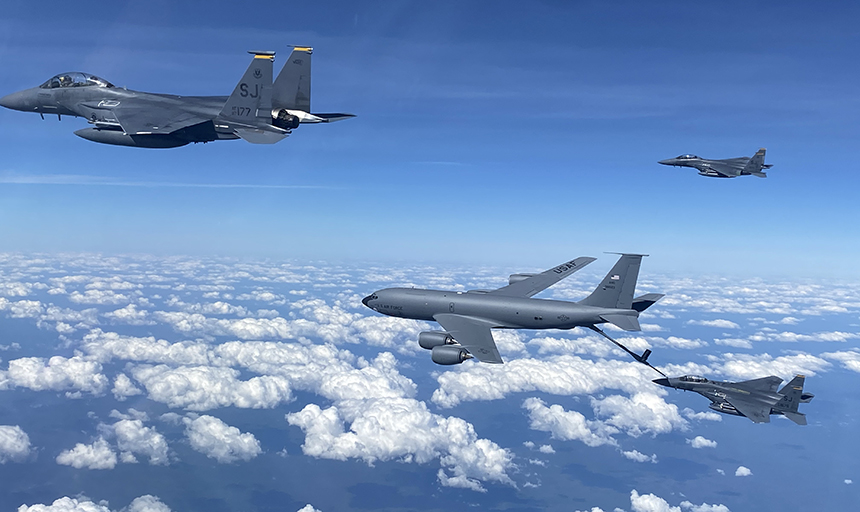