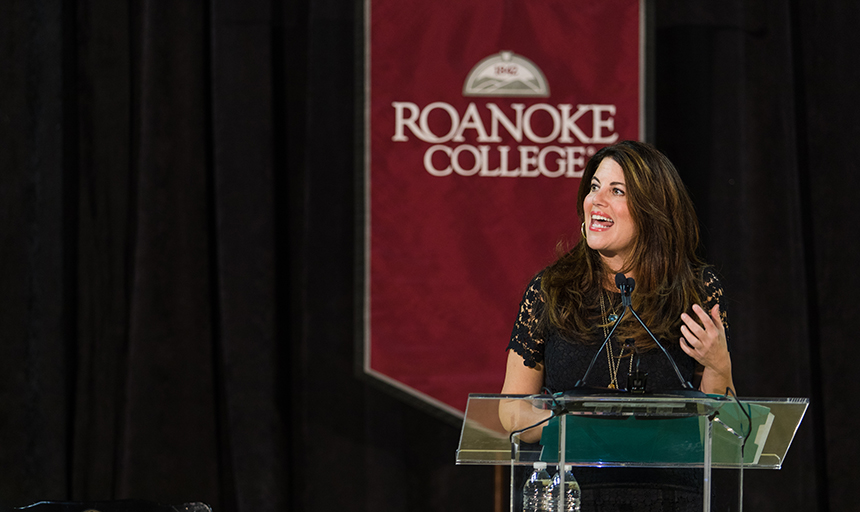 Former White House intern Monica Lewinsky advocates for a cultural revolution to counter what she refers to as an online “culture of humiliation.”

“With every click we make a choice,” Lewinsky told a crowd of 800 students, faculty and staff Feb. 4 in the Cregger Center at Roanoke College. Too often “we lose the ability to comment with humanity. We’re pushed to judge, enabled by technology.”

“We need a cultural revolution, a shift, a return to compassion and empathy,” she said. “Shame cannot survive empathy.”

If she has a platform, it is this: “Click with compassion.”

In 1998, President Bill Clinton admitted to having had what he called an "inappropriate relationship" with Lewinsky while she worked at the White House in 1995-1996. The acknowledgment led to Clinton’s impeachment by the House of Representatives (and acquittal by the Senate) and a scandal that continues to serve as a reference point for American politics.

“We need a cultural revolution, a shift, a return to compassion and empathy. Shame cannot survive empathy.”

Overnight, “I was in the eye of a media maelstrom,” Lewinsky said.

Twenty-four years later, with impeachment of President Donald Trump roiling, Lewinsky said she is “now back in the news cycle.” She largely kept discussion of the current political climate out of her presentation on Tuesday, noting that “’impeachment,’ has become a trigger word for me.”

But she is moving forward, reclaiming her life and “taking back my narrative.” She is co-producing a documentary called “15 Minutes of Shame” for HBO Max, and is producing FX’s “Impeachment: American Crime Story.” In 2015, she broke her public silence with a TED Talk, “The Price of Shame.”

“I was publicly silent for a decade; now no one can get me to shut up,” she quipped during her presentation at Roanoke.

Lewinsky’s visit to Roanoke College was sponsored by the Turk Pre-Law Program, as part of the College’s examination of civil discourse and democracy.