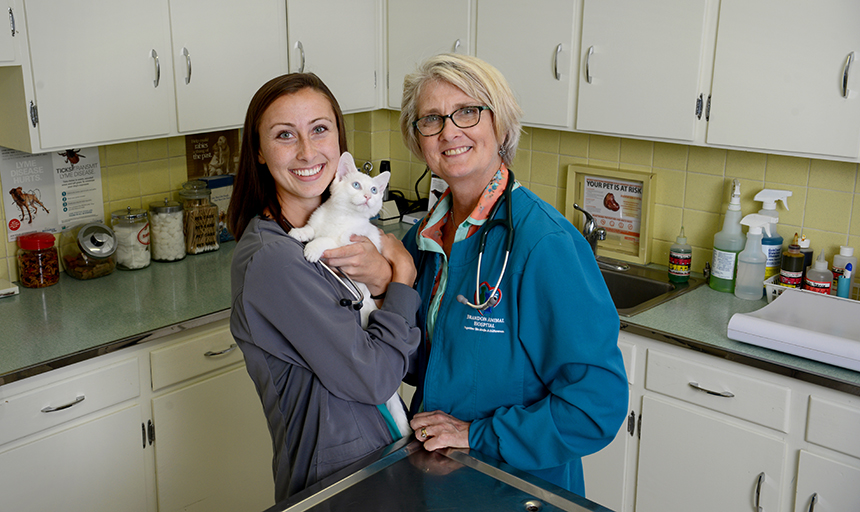 Mother, daughter share passion for the care of animals

Sara Farthing ’18 has no “Plan B” for her career path, no desire other than to be a veterinarian like her mother, Dr. Lisa Wilson Farthing ’84.

Sara chose this path when she was just 6 years old, a young age for such a firm decision, but by then she had already spent hours of her childhood at the animal hospital where her mother worked.

“[My mother] would bring me in on her back as she was checking the animals at night,” says Sara, describing her first visits as a baby. “And it was a bus stop for me in elementary school…It’s kind of like a second home for me. I got to see everything, and I absolutely fell in love with it.”

Lisa Farthing has worked at Brandon Animal Hospital in Roanoke, Virginia, since graduating from vet school and is now its owner. She insists that she didn’t try to influence her daughter’s career aspirations in veterinary medicine. Instead, she made sure that her daughter saw all aspects of it—not just the cute animals in the exam rooms. When Sara was old enough to work at the hospital, her job included cleaning kennels, dealing with pet owners in the reception area and witnessing euthanasia. None of that dissuaded her.

Lisa recognized in her daughter the same passion and drive that she has for the care of animals. However, neither expected such parallel educational paths. The two attended the same high school and both chose Roanoke College for their undergraduate studies, although mother majored in chemistry and daughter in biology.

When it was time to apply to vet schools, Sara Farthing was more than a little anxious. “I was terrified,” she says. But thanks to an abundance of hands-on experience while at Roanoke, she had a very strong vet school application. Four years of undergraduate research, several conference presentations and a three-week stint at a veterinary clinic in Mérida, Mexico, gave her a well-rounded resume.

“My mom is my hero, my inspiration, probably the best veterinarian I know.”

Sara was accepted into two vet programs and is now attending the Virginia-Maryland College of Veterinary Medicine in Blacksburg, Virginia, which is not only her “dream school,” but her mother’s alma mater. When the academic year opened with a “white coat ceremony,” it was her mother who had the privilege of presenting Sara with her lab coat.

“My mom, who is my hero, my inspiration, probably the best veterinarian I know—she gave me my coat,” Sara Farthing says. “That just meant the world to me, because I’ve always looked up to her.”

Lisa Farthing recalled how she felt that day. “It was surreal….I just thought, ‘Wow. Wow. Sara’s actually doing this.’” Her hope is that someday she’ll be in practice with her daughter.

This mother-daughter duo is just part of a three-generation Roanoke College legacy with interests in science and medicine. Lisa Farthing’s mother, Mabel “Jo” Umberger Wilson ’60, was a biology major and began her career as a biology teacher. Lisa’s father, Wayne Wilson ’60, is a retired military surgeon whose career includes serving as assistant chief of surgery at Walter Reed National Military Medical Center and chief of surgery at the Salem Veteran Affairs Medical Center.

Wilson Farthing ’16, a biology major, and Lisa’s son and Sara’s brother, is a clinical research coordinator at Virginia Tech Carilion School of Medicine and Research Institute. He will be facilitating an upcoming collaboration between the medical school and Roanoke College students who want to do clinical research in the Emergency Medicine Department.

As she contemplated her chosen path, Sara Farthing says that the typically disparaging joke, “I’m turning into my mother,” holds a different meaning for her.

“That’s the biggest compliment you can give me,” she says, “because I think my mom is just absolutely an incredible person.”