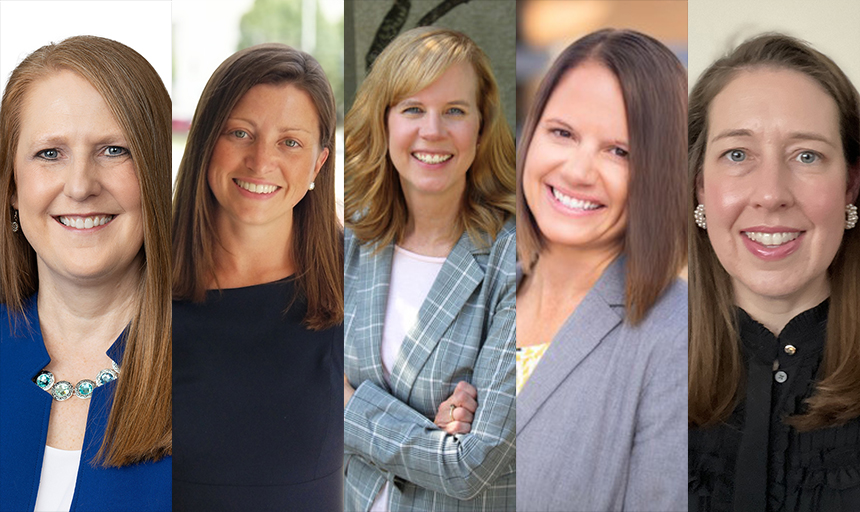 Michelle R.  Austin ‘93 is the Executive Vice President - Chief Operating Officer and Chief Financial Officer for Bank of Botetourt. Austin holds a Bachelor of Business Administration degree from Roanoke College and a Master of Business Administration degree from Troy University. Austin is a graduate of the Virginia Bankers School of Bank Management at UVA where she is also now on the faculty. She is also a graduate of the Graduate School of Banking at Louisiana State University. Austin serves on the Virginia Bankers Association Benefits Board of Directors. Austin is a member of the GO Virginia Region 2 Council, an initiative to drive private-sector growth, create higher-paying jobs, and foster regional collaboration in every region of the Commonwealth.  From 2017-2021, Austin represented the Buchanan District on the Botetourt County School Board, serving two years as Chair.

Amy Geddes ‘92 has practiced law in Virginia since 1995 and concentrates her practice in the area of disability law involving both public and private benefits. She represents claimants at all levels of the administrative process and in federal court. Geddes was an English and history double major at Roanoke College and earned a law degree from Valparaiso University. She is a member of the National Organization of Social Security Claimants Representatives, the Virginia Women Attorneys Association (VWAA), Ted Dalton Inn of Court, Virginia Trial Lawyers Association (VTLA), Salem/Roanoke County Bar Association, and the Roanoke Bar Association. She serves on the board of the Roanoke Bar Association. Geddes is an active member of College Lutheran Church.

Carrie McConnell ‘99 is the president of Ridge View Bank in Roanoke. McConnell has over 20 years of banking experience with extensive experience as a commercial lender. McConnell served as senior vice president of commercial lending at HomeTown Bank. Prior to that, she was instrumental in the development of a new bank that grew to over $550 million in assets before it was acquired. McConnell, who earned a Bachelor of Business Administration degree from Roanoke College, is very active in her community, serving most recently on the board for the Better Business Bureau Serving Western Virginia Board and the Salem Family YMCA Board.

Dr. Karen Rymers Winslow ‘02 is a pharmacist and works for the Virginia Pharmacists Association. Winslow also is the recent past chair of the Richmond Alumni Chapter for Roanoke College, a position she held for 14 years. Winslow majored in biology at Roanoke College and earned a Doctor of Pharmacy at the Medical College of Virginia. She previously worked as a pharmacist for CVS, Target Corporation and for the Pfizer Pharmaceutical Group.

Erin Burcham was named to Roanoke College’s Community Advisory Group. Burcham is the president of Verge and executive director of the Roanoke-Blacksburg Technology Council. Verge is the regional technology alliance that includes affiliates of the Roanoke-Blacksburg Technology Council, Valley Innovation Council and RAMP (the Regional Acceleration and Mentoring Program), a Roanoke-based business accelerator. Burcham spearheads initiatives for technology, innovation, and talent development in the region including multiple GO Virginia projects. She holds a bachelor’s degree in communications from the University of South Carolina and a master’s degree in leadership with a focus on economic development from Virginia Tech.