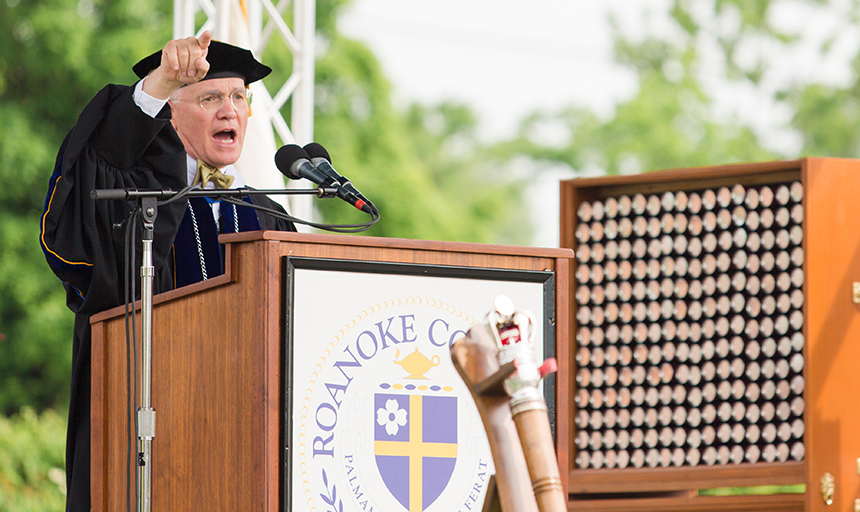 You have been gone, but not forgotten.

Remember last March 11, 2020, the day we announced that we would close the residence halls and hold remote classes for three weeks?   I will never forget your faces on the Back Quad as we announced our plans.  What was intended to be a three week pause became the remainder of the semester.  Then came the postponement of graduation which became a virtual conferral of degrees.  I am so pleased that you longed for this ceremony enough to return today.

You are Roanoke’s first Class in 179 years to have two ceremonies.  As I mentioned last May, you are Roanoke College history makers.

Those days are behind us, but they are by no means forgotten as we gather to celebrate your accomplishments.  We promised a graduation day.  We never forgot it.  Gratefully the day has arrived.  You were away from campus but we never forgot your efforts to earn a prestigious, well-deserved Roanoke College degree.  Congratulations Class of 2020.  It is about time to say that in person to you and to your families and loved ones.  Parents, friends and family, please join me in congratulating our Class of 2020.  Class of 2020, please join me in expressing your appreciation to your families for their support for you.  Please give them a wave now.

Thanks to people who made the day happen- Susan Rambo, our marshals, our ushers, and Campus Safety members…  Thanks for Mr. Courts for leading our College so ably and for being with us today.  He cares about you and his leadership is centered on that care.

Thanks to our City of Salem and its officials and staff for allowing us the use of Salem Memorial Stadium and making our presence possible.  Thanks as well to the public health officials and Commonwealth of Virginia. This has been a team effort.

Let’s go back in time for a few moments and remember your Roanoke start and finish.  You may have forgotten but most of you started on August 27, 2016 on a warm summer day.  You finished at home or on your computer one year ago.  What a change!  What a challenge you overcame!

Your first 3 ½ years were eventful but normal by most standards.  You attended the Activity Fair.  Waka Flaka Flame performed.  President’s Balls dazzled and delighted. College Nights at El Jefe happened.  Night trips ventured to the Mill Mountain Star.  You shot putted and went into overtime.  WRKE broadcasted.  Reverend Braxton spoke.  You were Fellows.  You took yoga and attended Mass.

You went to formals at Tuco’s.  The Cregger Center opened. Basically Tarantino film festivals made you stars.  There were Days of Remembrance, Teach-ins.   Stat Crews measured performance.  Tibetan Monks enthralled. You campaigned to support Mac n Bob’s to save the Bostonzones.  You experienced a flash flood, and Model Arab League.  The Swim team started.  You helped to build our 11th Habitat for Humanity House.  You were Theologians on Tap.  Quiz Bowlers competed.  Anchors splashed. Our Town was performed.  Monica Lewinsky spoke.  Lessons and Carols filled Saint Andrew’s.  There were College Night at Awful’s.  Superfans brought spirit.  Bingo had the best prizes.   CAB held Wine and Paint nights.  You walked the Camino de Santiago, traveled to Kenya, Hawaii, or London.  Lomo saltado and Burrito Day brought long lines at the Commons but you turned out bigtime for chicken tendies.  You won OMA, all conference, and Residence Life awards.  You were inducted into PBK.  You had NCAA rankings and conference wins.  You researched  “Structural Sexism in Women’s Health Care” and “Ventricular Function in Crustaceans”.   You considered the Confederate Statue.  You showcased your research.   Others searched for pledge classes.  You were the class that started the “You are on mute” movement.  You gardened.  After returning from your spring break last March of 2020, you left campus for the longest spring break in Roanoke history.  You set the 4 X 400 school record.  The DC semester called.  You answered.  INQ is a code word.  There were MacAfee Knob hikes with friends and Brackety-Ack issues.  You did Kickin’ It Live in the Commons.  There were Days of Silence.  You attended  formals and dined on General’s Chicken and Pancake Paradise.  Maroon Madness was a way of life.  Senior seminars were interrupted as you were getting into the subject.  Amanda Knox made us wonder.  You took the Catawba Challenge.  You faced unique pandemic challenges.

You became the first ever Roanoke Class to receive degrees on Facebook Live last May.  You waited patiently and impatiently for this day.  You developed a whole new vocabulary a year ago- “pandemic, PPE, community spread, super spreader, asymptomatic, and social distance.”  None of those meant the same when you arrived in 2016 that they meant at the close of your senior year.

While the steady drumbeat of Maroon life went on during your time at Roanoke even with the COVID departure, the world went on as well.  We don’t want to forget world events that were the backdrop of your Maroon times.

During your days,  Olympics in Brazil including Simone Biles earning the most decorations of any female American gymnast. Syrian refugees overwhelmed Europe. There was a Triple Crown winner. North Korea tested nuclear missiles.  Brexit became an exit. Hamilton debuted on Broadway.  For artists, a new blue pigment was discovered.  The 45th President was elected.  The Chicago Cubs won an historic World Series Championship.  A  report arrived from Mueller.  The ZIKA virus epidemic threatened. The Paris Accords were dropped by our Nation.  ISIS waxed and waned.  Artificial Intelligence beat Go grandmaster Lee Sedol -4-1 surprising everyone but Artificial Intelligence.  U.S. women’s soccer won the World Cup and demanded equal pay.  Stephen Hawking died.  We marveled at the solar eclipse. New Horizons space probe flew by the snowman-shaped Arrokoth  billions of miles from earth far past Neptune.   Antarctic and Arctic ice melted at unprecedented rates.  There was an Ebola epidemic which ended in time for the beginning of COVID-19.  Las Vegas became known for a shooting.   We sweated through the hottest year ever recorded.  While movie theaters were open you watched The Rise of Skywalker, Black Panther, and Aquaman.  You monitored  a barrage of Tweets.  Women Marched.  Hurricanes Harvey, Irma, and Maria devastated.  Charlottesville violence shocked us and accelerated necessary conversations about race.   The National Anthem became controversial.

Those days are gone over the past 4 years, but by no means forgotten.  So much has happened during your time here.  With all of those events and occurrences, let’s call out what lasts from your Roanoke College days-what sticks with you about your four years in the classes, on the fields, in recitals and theaters, in chapter rooms and worship services,  in the residence halls, in the Commons, on the paved walkways, in conversations in your rooms, off-campus and in town.

My hope about what sticks with you, what is unforgettable is simple.  Even when you are gone from this beautiful campus nestled, here are the Never forgets.   Think of this as our top ten list of  Never Forgets from Roanoke College.

You first heard about the next 4 Never Forgets when you arrived in orientation in 2016.  We called them pillars then.  Here they are again.  Never Forget #6.

Those were the pillars but there is one more Never Forget.

You have been gone from since March 11 but you were never and will never be forgotten at Roanoke.  In return, please hold Roanoke’s Never Forgets close and dear.