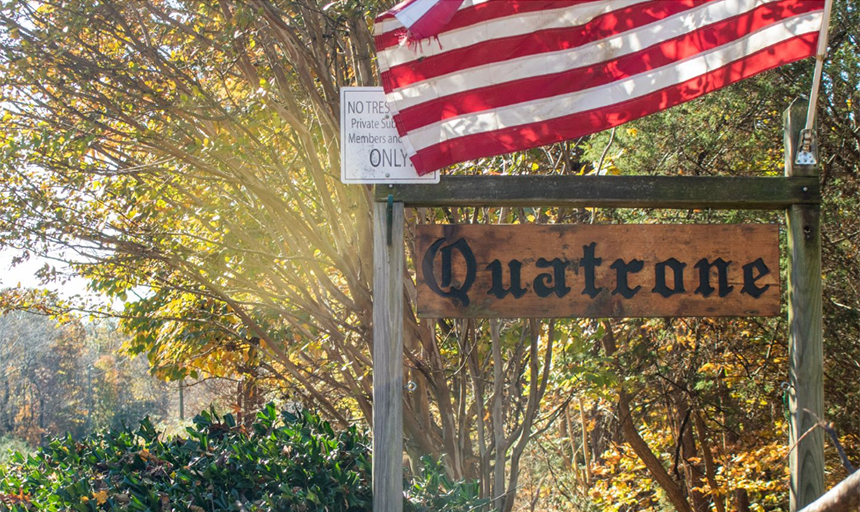 The Trip to Quatrone – an eye opener for Roanoke environmental students

Sometimes, hands-on is the best way to learn about a class subject or major being pursued, how it applies to real people – and who they are. Such was the case this past academic year when a group of 20 students in the Roanoke College environmental studies program made several weekend trips to Pittsville, Virginia, a small rural town on the Bedford County side of the border with Pittsylvania County. More specifically they spent time with mostly-older residents in a subdivision named Quatrone, which sits alongside Leesville Lake, the lesser known cousin to popular Smith Mountain Lake, which spills over in it.

The goal for these intrepid Roanoke students? Working with the Virginia Department of Forestry on the nationwide Firewise initiative, they educated residents on creating “defensible spaces” around their homes to reduce the threat of extensive damage should a wildfire ever occur. They even helped clear some of the brush that could supply fuel for those fires.

The primary goal of the hands-on “practicum,” however, was to identify and establish by GPS coordinates the best place to build an underground water storage tank or “dry vault” that could be filled from Leesville Lake and utilized by fire crews should a serious wildfire ever occur in the somewhat remote Quatrone community. The nearest fire station is not right around the corner, another factor the students chronicled. It hasn’t happened in Virginia to that extent but many will recall what took place in Paradise, California last year – the community ostensibly wiped off the map by a fast moving wildfire that also killed dozens of residents.

Climate change has led to drier conditions and more droughts in the eastern U.S.  That makes future wildfires more likely in heavily forested areas where people now live as well, a condition most often associated with western states historically. The Forestry Department refers to that as the wildland-urban interface (WUI) – currently the number one sector for job growth in government forest-related work.

“I was very pleased with what the students accomplished and what they learned about a regional rural community in Southwest Virginia,” says Dr. Valerie Banschbach, the chair of environmental studies program and the professor teaching the senior Capstone environmental practicum.  “This certainly represents some of the unique value of a Roanoke College liberal arts and sciences experience - something that students won't easily get elsewhere.” 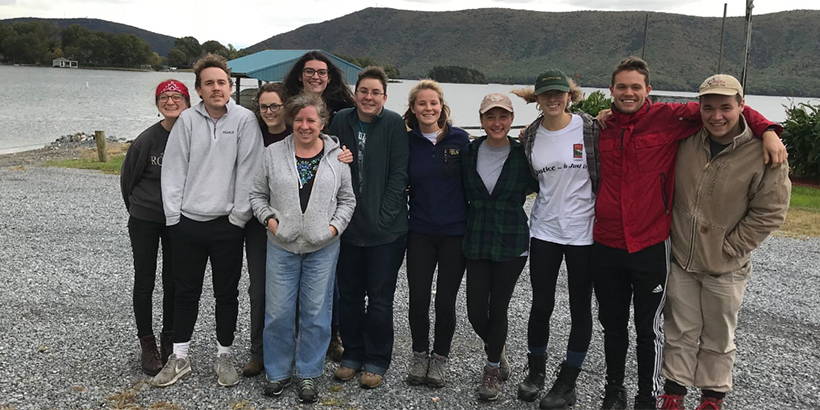 The group of students with Professor Valerie Banschbach at Leesville Lake.

Harold Wooten helped orchestrate luncheons where Roanoke students could meet Quatrone residents, mostly senior citizens, which helped overcome any misgivings they may have had. It also provided an opportunity for those residents to become more firewise when it came to their own homes. Analyzing property boundaries and the distance from each residence to water helped determine and map the optimum spot for a future underground dry vault.

A $5000 grant from the VA Department of Forestry underwrote the project and additional funding may be in the offing. Students also created marketing materials and media sites about the program, in part to link Quatrone to the Brumsfield subdivision nearby that is a Firewise-certified community - and has already installed a dry vault storage system. Other students surveyed water quality in Quatrone and in Leesville Lake.  There were also side trips to local fire stations to learn about rural forest management.

“This experience had a positive experience impact on me as an individual,” one senior related in a Power Point report assembled after its completion. “It’s one of the first projects where the final outcome of my work will be implemented in the real world. You feel more accomplished. This will further reassure me that I can use the knowledge I learned in school to develop a career.”

Engaging students with a local community on an environmental project was one way to expose Maroons to a glimpse into their future, a path they could pursue career-wise for those interested in forestry, for example. For young millennials, it was also a chance to connect with an older generation they may not have much contact with day to day. One avid fly fishing student at Roanoke College even received an antique rod and reel from an appreciative resident.

Another student reflected on visits with a Quatrone resident: “[she] had a very powerful impact on my feelings for the project. I no longer felt I was working for a grade. Instead the work I was doing was to help [her] and her neighbors. That personal touch made the project more meaningful.” A powerful life lesson that this handful of Roanoke College students can take with them long after graduation.