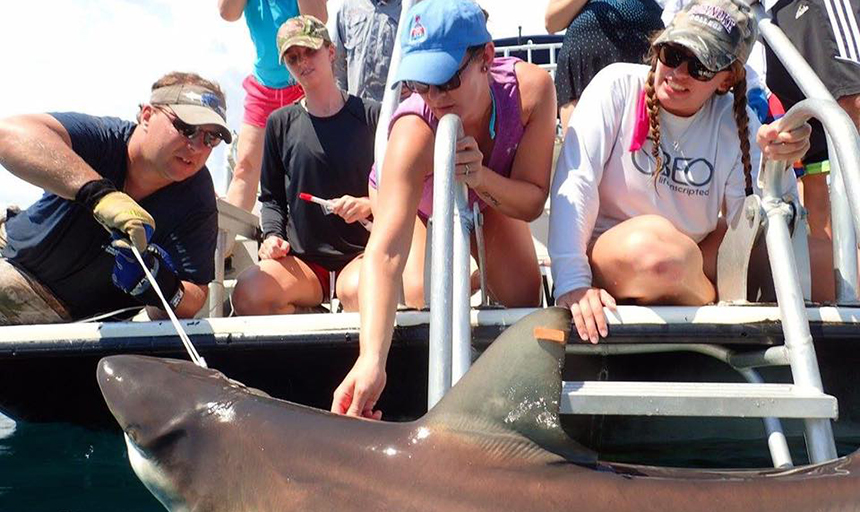 Rachael Storo '15 (far right) inspects a shark along with other researchers.

Alumna’s research takes her to bottom of the ocean

The tiny, cramped submarine named Alvin descended into the darkness of the deep ocean, with Rachael (née Karns) Storo ‘15 on board.

It was the day after Thanksgiving in 2018, and Storo and two others were far beneath the waves of the Gulf of California. They were going where very few people have ever been — the ocean floor. As Storo prepared to leave the tiny capsule, she thought that this must be how astronauts feel.

“It’s this, ‘You’re going into this unknown frontier’ sort of feeling,” Storo said. “You get to be one of the few people who have seen, with your own eyes and not just through video, the bottom of the ocean.”

She and her colleagues aboard the Alvin with the Woods Hole Oceanographic Institution (a nonprofit research organization) were examining hydrothermal systems on the ocean floor. 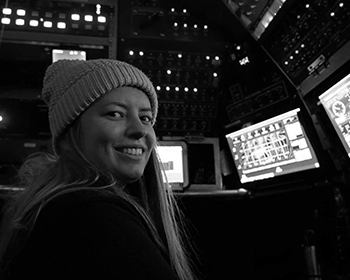 Reflecting on that trip nearly two years later, Storo says that’s been the highlight of her time studying the ocean, but it’s far from the only time she’s been amazed. Storo is in her third year of work on her Ph.D. in marine science from the University of Georgia’s Franklin College of Arts and Sciences. Prior to that, she earned her Master of Science degree in marine science at Nova Southeastern University.

Storo has been interested in the ocean and conservation from an early age, but one aspect of the ocean fascinated her the most — sharks. For many people, the mention of sharks conjures up images of rows of sharp teeth, or a dorsal fin lurking near a beach, but Storo says sharks are very different from their portrayals in pop culture.

“They’re kind of the snakes or the spiders of the ocean,” Storo said. “Everybody has this perception that they’re inherently bad and they’re going to attack you and they’re terrifying, but that has never been my experience at all. I want to illuminate that for other people.”

“It’s this, ‘You’re going into this unknown frontier’ sort of feeling. You get to be one of the few people who have seen, with your own eyes and not just through video, the bottom of the ocean.”

Storo has spent time researching sharks, but has now also delved into studying the microscopic organisms that fuel underwater life, such as bacteria. She’s uncertain exactly where the research might lead her, but she feels prepared to study a wide range of biological topics.

“The good thing about what I do — and this is true with regular biology, not specifically marine — is that you can take the same skill set and apply that to anything,” Storo said.

She built the foundation for her research with her biology major at Roanoke. She double-majored in biology and theater arts, and said she greatly appreciated the intimate learning environment the College fostered.

In that environment, she formed tight bonds with professors, some of whom she still talks to. She mentioned Dr. DorothyBelle Poli, associate professor of biology, and Dr. Marilee Ramesh, biology department chair, as people who have helped her over the years.