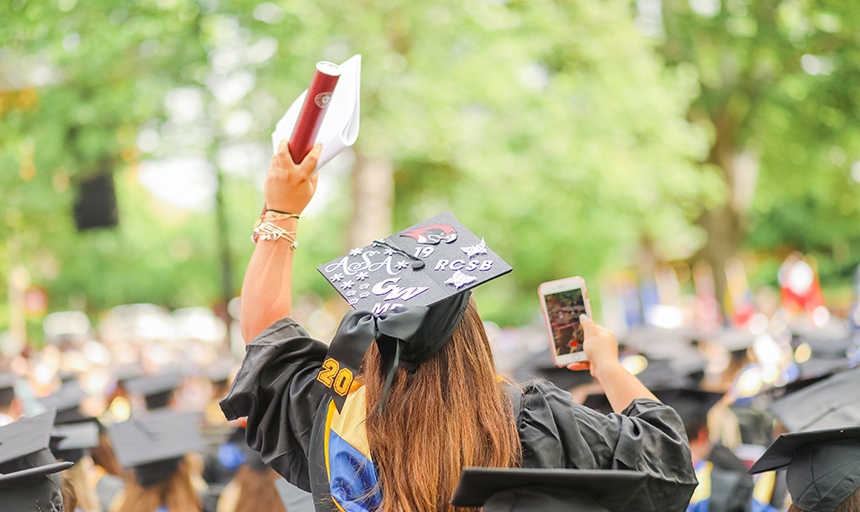 Where to from here?

The U.S. Census Bureau’s “Educational Attainment in the United States: 2018” reported that nationally, 13.1% of people who earned bachelor’s degrees that year went on to earn master’s, professional and/or doctoral degrees. According to the Roanoke College Office of Career Service’s “first destination” data of recent graduates, roughly 20% of 2018 graduates entered graduate school or professional school — exceeding the national percentage.

While similar data on Roanoke College’s Class of 2019 won’t be available until early 2020, two of the class members are now pursuing studies at Harvard University professional schools — a distinction, certainly, and possibly a first for a Roanoke College graduating class. Here are their stories, and those of two other 2019 graduates for whom the Roanoke experience inspired deeper academic pursuits.

Matthew Johnson ’19 says he has witnessed the positive impact healthcare professionals can have on people in the most difficult moments of their lives.

“Seeing my mother battle and survive breast cancer during my childhood inspired me to want to become a physician,” says Johnson, of Almond, New York. “I want to be part of providing this life-saving care.”

In August, he took one giant leap toward his goal.

Johnson entered Harvard Medical School, ranked by U.S. News and World Report 2019-20 as the No. 1 medical school in the country. Attending Harvard, he says, “is truly the fruition of a dream.”

“I’m ecstatic about studying with passionate scholars and future healthcare leaders and learning from the diverse patients in our affiliated hospitals,” says Johnson, who majored in biochemistry at Roanoke. “I’m very grateful for this opportunity to learn exceptional medicine.”

Johnson credits Roanoke College with providing an environment that helped him grow “as a critical thinker, student, Christian, individual, scientist and future physician.”

“The well-rounded liberal arts curriculum enriched my knowledge in not only biology and chemistry, but also psychology and literature,” Johnson says. “The volunteer opportunities at Roanoke also reaffirmed my passion for service and provided avenues to learn new skills while helping others.”

“I applied to over 20 medical schools and was fortunate to interview at many of them,” Johnson says. “After revisiting Harvard during a program for accepted students, I realized that it was the right fit for me.”

“I cannot wait for what the next four years here will bring,”

Becoming a lawyer wasn’t always in Rebekah Carey’s career plan. As early as middle school, Carey, a December 2018 graduate of Roanoke, was convinced she wanted to pursue a career in law enforcement, specifically as an FBI agent.

Early on, she started trying to figure out what path would best help her reach that goal. The law was one path, though for Carey, not the preferred path.

“But the more I started studying law, the more I realized it was the right path for me,” says Carey, who majored in criminal justice and political science. “Freshman year, I took two upper-level law classes and thrived. I was really in my element. It was at that point I decided that law school was for me.”

This fall, Carey, of Severna, Maryland, entered Harvard Law School, ranked by U.S. News and World Report 2019-20 as the No.3 law school in the country, just behind Yale and Stanford.

“It is still surreal,” Carey says. “I’m thrilled and excited, and also a bit terrified. There’s a bit of imposter syndrome that I think is only natural. But at the end of the day, I think that can be a good thing. It allows you to stay humble and embrace the opportunity you’ve been given, realizing there is a level of responsibility that comes with it.”

Carey has a keen interest in working in public service after completing law school, specifically, prosecuting crimes against women and children at the federal level.

“For me, law is compelling because it is a profession that allows you to be an advocate for justice and to give a voice back to the voiceless,” she says. “The law isn’t perfect, and we don’t always get it right. But when we do — when a court of law can achieve justice — that is a powerful thing of which I can’t wait to be a part.”

“Freshman year, I took two upper-level law classes and thrived. I was really in my element. It was at that point I decided that law school was for me.”

That combination of diverse classes and settings provided direction in Ford’s area of study after graduating this year with a degree in international relations.

“Very rarely did a professor at Roanoke ever say ‘no’ to my ideas for research directions,” Ford says. “In fact, they often recommended opportunities for me to pursue that advanced my career.”

Ford was one of six Roanoke College students who, with two faculty members, traveled to South Korea in 2018 to conduct a three-week research project, made possible through an ASIANetwork Fellowship Award. Ford — solo and with other students — later presented the research, which explored how South Koreans view North Koreans who live in South Korea through portrayals in film, at events in San Diego, California and Washington, D.C.

This year, Ford received a full tuition waiver and living stipend to study as a Predoctoral Fellow at the University of Illinois Urbana-Champaign, Department of East Asian Languages and Cultures. Ford, of Hampton, Virginia, will earn an M.A. and a Ph.D. through the six-year program.

Ford’s long-range goal is to develop a set of standards for organizations that want to deliver aid to refugees and other vulnerable populations.

“My goals for my time at the University of Illinois is to maximize what I can learn and connections I can make so I am prepared and capable to improve humanitarian aid distributions to refugees and other vulnerable populations,” Ford says.

“I hope to start by working in the United Nations and learning more about organizational practices. In fact, I hope to research U.N. staff and systematic procedures while in graduate school. After that, and with a deeper understanding of humanitarian aid in general, I would like to develop a set of standards for organizations that wish to deliver aid to refugees and other vulnerable populations. By doing this, only those organizations that can prove they are "effective" at aid delivery would receive government, and international funding, as well as permissions to work with vulnerable populations. We have bar exams for lawyers, why not raise the bar for delivering aid?”

Cody Dillon-Owens ’19 loves psychology, specifically its interdisciplinary approach to solving problems and understanding the human condition. He also believes that physical and mental health are intertwined and wants to learn how to holistically approach helping people.

“The brain and body all operate under one system, so it’s important to understand all of the factors at play,” says Dillon-Owens, who majored in psychology at Roanoke.

Yet it was his psychology professors at Roanoke College who pushed him to realize he could excel in a Ph.D. program in psychology. Conversations with them “made me realize psychology was my passion, but I also wanted to apply it to make a difference in other’s lives.”

Dillon-Owens entered the University of North Carolina at Charlotte this fall, where he is pursuing a doctorate in health psychology with a concentration in clinical psychology. He chose UNC Charlotte because the program takes a holistic approach to understanding human health, the faculty are “personable and collaborative, and the course load more than prepares you for both practice and research.”

Dillon-Owens also believes his rigorous but enriching education at Roanoke, plus the one-on-one teaching he received, prepared him well for this next step. Long-range plans are a bit uncertain; he still has five years of academic work followed by a yearlong internship ahead, he says.

But “I foresee myself working in a healthcare system doing some combination of practice, intervention research, and program evaluation,” Dillon-Owens says. “I have also considered professorship.”